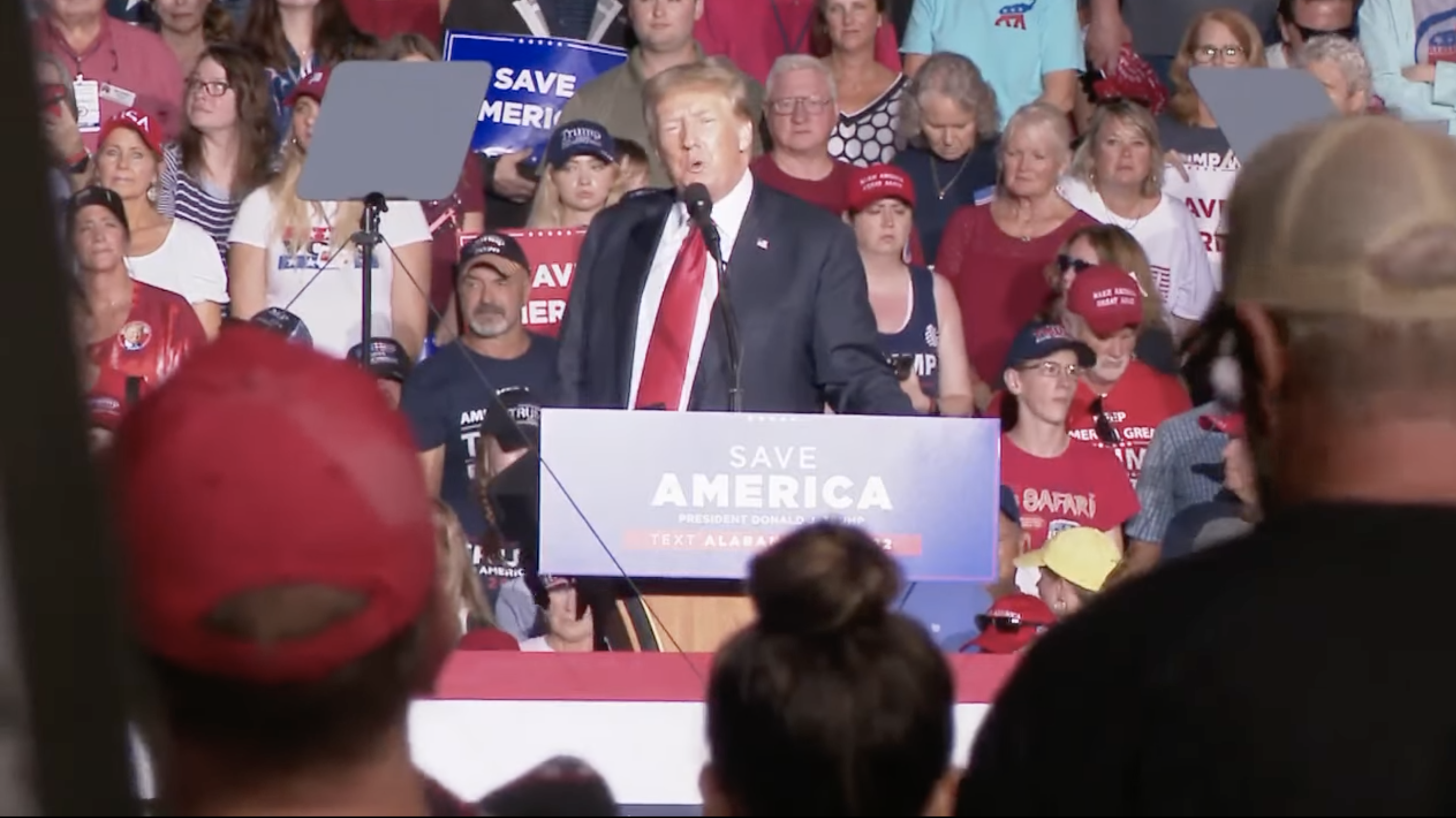 President Donald Trump speaks at a rally in Cullman.

Former President Donald Trump spoke to approximately 40,000 supporters in Cullman on Saturday. Trump’s remarks were preceded by a number of speeches by Alabama elected officials and other speakers.

Alabama Chief Justice Tom Parker gave the benediction at the event and prayed for a spiritual reawakening in America.

Alabama Gov. Kay Ivey did not address the rally, but she did warmly greet the president at the airport and released a statement.

“The Trump Administration and the Ivey Administration worked hand in hand to deliver results to the people of Alabama,” Ivey said. “I was honored and thrilled to welcome President Trump back to Sweet Home Alabama today.”

Ivey said in a statement. “His America First Agenda is something that we believe in firmly here in Alabama. It was great to have President Trump in Cullman, and I remain committed to carrying out his agenda of supporting small businesses, creating more jobs here at home, keeping business here in Alabama and America and much more in the years to come.”

Alabama Republican Party Chairman John Wahl spoke to the multitude that attended: “The fact that you are here and are willing to stand for President Donald J. Trump shows that you love this nation as much as I do.”

“They call themselves Democrats, but they are really communists,” Wahl said. “America was founded as a republic, but they would redefine America into a socialist democracy — a terrible form of government.”

“Our rights come from our creator and not government,” Wahl said. “No person, no entity has the ability to take your rights away from you.”

“In recent days we have seen the cancel culture mob attack our history, burn books, and destroy art,” Starnes told the multitude in attendance. “Hear me Alabama, Critical Race Theory is demonic doctrine from the pit of Hell.”

Starnes blasted the Biden administration for, “Our fellow countrymen left behind in Afghanistan. If Donald Trump had been in that Whitehouse he would not have left any American behind.”

“I have hope in America because my hope is not built on 1600 Pennsylvania Avenue my hope is in America,” Starnes said. “With Donald Trump at our side he will take away that dark winter and return America to the shining city on a hill.”

Mike Lindell, the president and CEO of My Pillow, blasted Fox News for not reporting on his allegations of election fraud in the 2020 election and for not playing the Alabama rally live nationwide like other conservative outlets.

“Thank you, everybody, you guys keep me going,” Lindell said. “Shame on Fox.”

“We have more evidence,” Lindell said, “But Fox does not talk about it. They turned on us.”

Lindell called on Fox News personalities like Tucker Carlson, Sean Hannity and Laura Ingraham to quit and promised that he would pay them himself.

Lindell said that if Fox News would cover the 2020 election investigation like OANews and Newsmax that Trump would be back in office.

“If Fox News came on board we would have this country back and Donald Trump in the White House by fall,” Lindell said. “It is not just the fake news, it is the no news.”

Lindell denounced his critics in the mainstream media.

“They attacked me, they called me everything imaginable, they attacked my company,” Lindell said. “There is so much evidence, but the media won’t cover it. There was more than fake news. They are evil.”

APR asked Lindell: You have been the most outspoken Trump supporters among the business community. How has that outspoken position affected your business?

Mike Lindell said: “It has had its ups and downs.”

“If only legal votes had been counted in 2020, Trump would still be President,” Sorrell told the multitude. “If only more states ran their elections like Alabama.”

Sorrell said that Biden’s withdrawal from Afghanistan, “Has been the biggest foreign policy disaster in my lifetime.”

On the border crisis on the southern border under Biden, Sorrell said, “That’s not immigration that’s invasion.”

Sorrell said that as the chairman of the Alabama delegation to the 2020 Republican Nation Convention he got to cast the first vote for Donald Trump.

“That moment was the highlight of my political life,” Sorrell reflected. “Alabama patriots it is now time to stand up.”

“While Congress is debating what bathroom to use we need to wake back up this country and this Congress,” Sorrell said, “We must retake the Congress in 2022 and the White House in 2024.”

Sorrell is a 2022 candidate for Alabama state auditor.

State Sen. Garlan Gudger, R-Cullman, was next to address the crowd.

“How great is today?” Gudger said. “Man I am excited to see all these faces in Cullman Alabama my hon town.”

“He has kicked liberal’s ass from sea to shing sea,” Gudger said of Trump.

Gudger praised Cullman and the current city and county leadership for the economic growth that allows a small town like Cullman to be able to host an event on this scale.

“It is because the one asset is the hardworking people we have here that share the same goal of making Cullman Alabama the best small city that it can be,” Gudger said. “We celebrate record attendance.”

Aderholt said that Trump and the Make American Great Again agenda “will make sure that we have computer chips that are made in the United States of America,” as well as American made steel and other products.

“President Biden is turning over $billions in military equipment, military bases, and embassy over to the Taliban,” Aderholt said of Biden’s Afghanistan policy. “He has made America look weak on the international stage. Donald Trump never made us look weak.”

“You have seen what this administration has done in its first 214 days and I don’t have words to describe it,” Marshall said.

Marshall said that Biden was making taxpayers “pay for abortions through Medicaid.”

“The Department of Education has been promoting bizarre ideas and recommending genderless locker rooms,” Marshall said. “We have lost 200 law enforcement officers this year including three in Alabama.”

“We have 1,248 days left,” Marshall said. “What are we going to do about it? Strengthen what remains. Alabama is uniquely equipped to push back against the Washington that we have today.”

“My mission is to make Alabama safer and our country freer,” Marshall said. “I will gladly fight the Biden administration at the Supreme Court at every opportunity.”

“Look at what is happening in Georgia,” Marshall said.

Lt. Gov. Will Ainsworth said of Biden, “If he was a football coach in Alabama he would already have been fired. It is time to impeach Joe Biden!”

Ainsworth said that Biden and the Democrats, “Are plotting to bring in illegal aliens across the border in order to steal our elections.”

“They want to teach our children to be ashamed to be Americans,” Ainsworth said. “Joe Biden and flip-flopping Fauci believe in vaccine passports, mask mandates, and closed schools.”

“I have been a Donald Trump fan since he first ran,” Tuberville said.

“They used to call it Woodstock; this is Trumpstock!” Tuberville said of the rally. “We are going to get it back. Look at the other side they are cutting their own throats.”

Congressman Mo Brooks, R-Huntsville, was the last speaker before Trump himself spoke.

“President Trump is right behind us and I want to help you help me give Donald Trump an Iron Bowl welcome,” Brooks said. “It is an honor to represent you in the United States Congress.”

“We are not the greatest nation in world history because our founders sacrificed,” Brooks said. “Over a million Americans have sacrificed their lives beginning with the Revolution.”

“A government that can give you anything can take away everything,” Brooks said.

Brooks said that there is a “defining difference” between Republicans and the socialist Democrats of today. “We are guided by moral values. Religious values that determined what was right and what was wrong.”

“I have never felt such fear for our country,” Brooks said. “America is under attack because socialist Democrats are on the march.”

Brooks said that the “evil socialists” tolerate our faith, but, “They don’t want us to carry our faith with us out of the Church. That is not freedom of religion. You have the right to have religious and moral values with you 24 hours a day seven days a week.”

Brooks said that the Second Amendment is there so that we the people always have the right to take back the government if they take away our rights.

Brooks also warned about the national debt: “Why they want to put us into an insolvency and a national bankruptcy is beyond me.”

“Why don’t you tell the truth about what happened in 2020?” Brooks said of the media. “Is it too much to ask you to do your homework before you speak.”

Brooks said that in 2005 a federal electoral commission found systemic election flaws that put our nation at risk. That “was chaired by Jimmy Carter and James Baker.”

Brooks implied that the 2005 report predicted the disputed outcome in the 2020 election.

“We cannot have so many mailed out ballots,” Brooks said. “Our challenge is to fix the problem.”

When Brooks said, “Put that behind you and look forward. Beat them in 2022 and beat them in 2024,” the crowd interrupted his speech with loud boos.

In response, Brooks said, “All right, well, look back at it, but go forward and take advantage of it.”

Brooks switched gears and joined in the crowd’s chant of “fix it now!”

Trump, for his part, endorsed Brooks’ Senate campaign at multiple points in his own speech that went on for over an hour and twenty minutes. Brooks is running for the Senate seat currently held by Richard Shelby, R-Alabama. Shelby is not seeking a seventh term in the Senate.