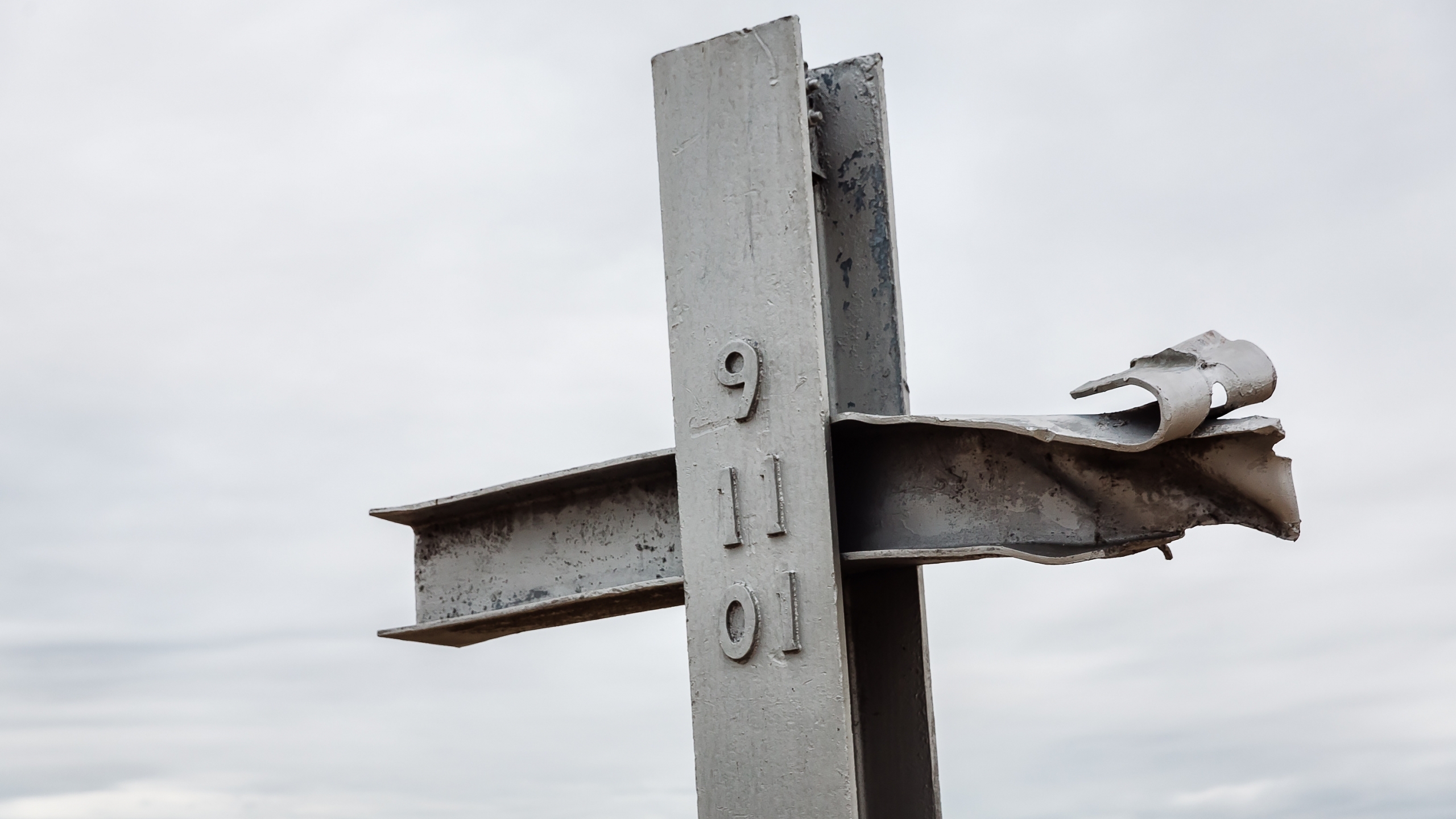 A cross-shaped piece of steel from the World Trade Center.

I have seen terror rain from a clear, blue sky.

My wife Susan and I lived in New York City on Sept. 11, 2001, and I will always remember the events of that day. But now, 20 years later, it is the aftermath that is haunting. I wish the nation could unwind the clock because the unity of 9/11 is part of the division we live with today.

In May 1998, Osama bin Laden sat for an interview with ABC reporter John Miller in which he recited his many grievances with the United States. During the discussion, bin Laden said: “We anticipate a black future for America. Instead of remaining United States, it shall end up separated states and shall have to carry the bodies of its sons back to America.”

Today, our nation is divided in ways bin Laden and his followers could have never imagined — or perhaps they did.

Like all memories, mine is colored by time, but looking back to that day as I have over the last 20 years, I’m still awed at the kindness demonstrated on that day as New Yorkers, and the country, joined together in solidarity.

Susan and I left our apartment on 36th and 3rd in Midtown Manhattan around 8:30 a.m. that Tuesday morning for a meeting uptown. We never made it far from our home because at 8:46 a.m., American Airlines Flight 11 crashed into the North Tower of the World Trade Center. Instead of continuing to our meeting, we rushed back to our home and turned on the TV, and we watched the smoldering flames ignited by the first airplane as the second one, United Airlines Flight 175, crashed into the South Tower of the World Trade Center at 9:03 a.m.

Our office was located on Broadway between Prince Street and Spring Street, approximately one mile from what would come to be known as Ground Zero.

When the second airplane hit, we knew it was a terrorist attack, and I was determined to head downtown to check on our staff and see if anything could be done. In so many words, Susan said I’d be leaving our apartment over her dead body. It was not her mere words that convinced me to change course, but the ferocity of her argument.

We both frantically tried to reach our staff by cell phone and landline unsuccessfully. Finally, an email was answered by one of the staff, and after hearing that everyone was alright, we begged them to vacate the building and for any who needed shelter to come to our place.

Eventually, eight individuals came from our office, and later we were joined by neighbors and other friends, all searching for companionship, comfort and understanding.

Telecommunications, cable, and the internet were spotty at best for the rest of the night and weeks after. People wandered in and out the rest of the day and into the night. Those who went to give blood came back saying it wasn’t needed because there were few survivors.

One of our coworkers that evening looked around at the gathered few and said: “Do you understand this changes everything?”

I didn’t believe her. America would not fundamentally change because we were attacked; we were made of tougher stuff. But she further argued that while our nation would offer a strong military response, she believed that most people would cower in fear and demand new, more Orwellian protections.

She was right, and I was wrong.

President George W. Bush marched the country to war, first in Afghanistan and then Iraq. I believed at the time that a limited military operation to root out Al-Qaeda and its Taliban enablers was a just course of action in Afghanistan. Iraq was a different matter. There was no credible connection between Saddam Hussein’s regime and the attacks on 9/11.

We must honor the service and sacrifice of our brave women and men who gave so much in those wars, but we would be foolish to forget the lies told by military and political leaders to keep us at war for two decades.

Soon after Congress authorized Bush’s war powers, a sign was hung from an apartment window in the Bowery. It read: “An eye for an eye will leave the whole world blind.” To which I often remarked when passing it: “In the land of the blind, a one-eyed man is king.”

Still, today, presidents and other political leaders want the nation blinded by fear.

Recently, Pulitzer Prize-winning writer Carlos Lozada, the nonfiction book critic of The Washington Post, analyzed many of the volumes written on 9/11 and the chain reaction that followed. It is both brilliant and horrifying, but history always is so when looked at over years and distance.

In one passage, Lozada observes:

“[T]he war is not just far away in Iraq or Afghanistan, in Yemen or Syria, but it’s happening here, with mass surveillance, militarized law enforcement and the rebranding of immigration as a threat to the nation’s security rather than a cornerstone of its identity.”

In another section, he writes:

The fear, nativism, conspiracy-driven hatred, and paranoia that arose from 9/11 are easier to link to Jan. 6, 2021, than the war in Afghanistan was to the invasion of Iraq.

Day after day, I wonder how we heal the division between us. Daily politicians, cable con-men and internet provocateurs dish a banquet of lies and deception to their followers while feeding their own egos and bank accounts.

Where does the love of God shine in midst of so much darkness?

Nineteen terrorists hijacked four commercial airplanes and carried out suicide attacks against the United States. Now, instead of America being the land of the free and home of the brave, we have a nation at war with itself, and fear is at the root of our division.

On a horrific fall day in Manhattan, strangers comforted strangers, and what I witnessed was our nation’s greatest strength: kindness.

Susan and I had two attorneys whose offices were on the 85th floor of the South Tower of the World Trade Center. One survived by what seemed like a miracle. The other perished. Her parents buried an empty coffin.

A few weeks after the attack on 9/11, I received a curious email. It was from our deceased attorney who had sent me a message mere milliseconds before her fate was sealed.

How odd, I thought, to receive an email from the last known seconds of someone’s life.

It is a reminder of the randomness of our existence and of how temporal this life is.

We can’t unwind the clock to the moments before 9/11 or change the events that followed over the last 20 years. However, we have it within our power to live kinder, love more profoundly, and look forward with hope.

The companies we owned on 9/11 failed a year later. We came home to Alabama to regroup and stayed. I don’t believe bad things happen for a reason, but our life in Alabama has been filled with many wonderful rewards. I do believe that we can give meaning to terrible events by learning from the past and making the future better.

I have written about 9/11 nearly every year since the terrorist attack. I think, now, I am finished.

Sadly, we are no longer one nation under God, indivisible, seeking liberty and justice for all, but we can be. Today, those who cry freedom the loudest work to beat others into submission in culture wars and other madness.

No potion or tonic can cure this present sickness or break the nation’s fever.

When justice, equality and humanity are cast aside and replaced by fear and loathing of our fellow Americans we no longer have a United States.

The lessons I learned from 9/11 are many. Among them are: an eye for an eye is destructive vengeance, one-eyed kings will always find followers, and our country is at its best when it is good.