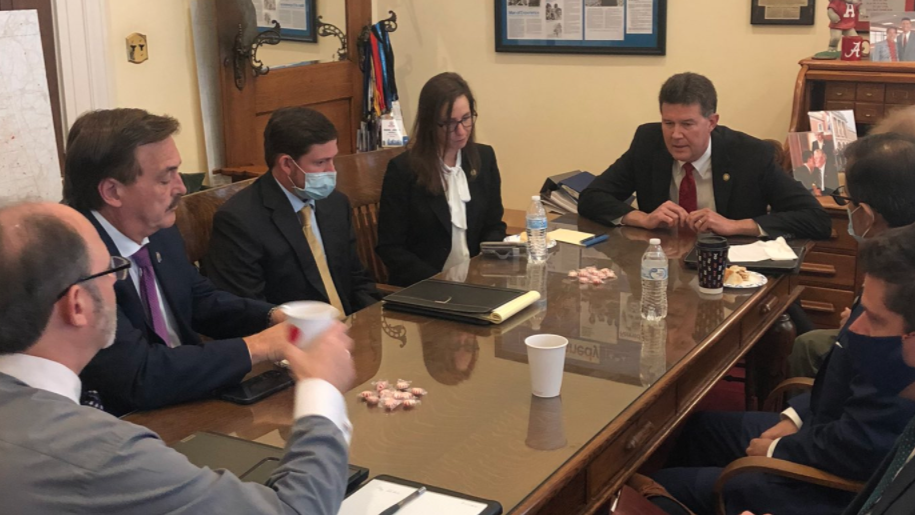 Mike Lindell, CEO of MyPillow and one of former President Donald Trump’s key supporters and backer of the unfounded claims that the 2020 presidential election was stolen, believes 100,000 Alabama votes were “flipped” and the state’s voting machines hacked.

Lindell visited with Alabama Secretary of State John Merrill and Merrill’s staff on Friday, later in the day meeting Gov. Kay Ivey as well. Lindell, former President Donald Trump’s advisor, also bought a copy of Alabama’s voter registration list and plans to conduct “tests” on it. Copies of that voter list are available for purchase from the state by anyone.

“This morning our team met with Mike Lindell of My Pillow. We discussed the administration of the 2020 General Election,” Merrill wrote on Facebook after the visit. “He was very impressed by our efforts and said that Alabama had the best election system and the safest procedures he had seen in America! We look forward to our next meeting!”

“Even though Mr. Lindell indicated that Alabama has the best elections system he has seen and that our state has the safest election procedures of all of the 50 states, he still has some questions he would like to have answered,” Merrill said in a statement posted to the Secretary of State’s website. “We will be looking forward to his next visit in our state.”

Lindell, in a video posted to his website on Sunday, said Alabama’s election officials are doing “everything right, but they still somehow got through, with computers or whatever,” referring to hackers, although he didn’t identify who those alleged hackers might be.

“Today I found out that the machines can be set where you can access them (by) Bluetooth, remotely,” Lindell said.

Lindell claimed, without offering any proof, that according to his “packet capture” data, intercepted network traffic that he’s claimed show evidence of election hacking, 100,000 Alabama votes were “flipped” and that “we do have the data. Dr. Frank’s data, where every, every single county was affected.”

Lindell was referring to Douglas Frank, a former Cincinnati-area teacher who’s made a myriad of unsubstantiated claims about the election. Frank can be seen in one photo shared by Merrill on Twitter attending the meeting with Lindell in Alabama on Friday.

Lindell claimed that same data could prove China hacked the election, but at a three-day conference where he said he’d show that data and pay $5 million to anyone who could disprove it, Lindell’s team never showed the data.

Lindell’s lead cyber-security expert, Josh Merritt, told The Washington Times that the “packet captures are unrecoverable in the data” and “the data, as provided, cannot prove a cyberincursion by China.”

Merrill told APR on Monday that Alabama’s vote-tabulating machines were custom-designed to not include a modem, which would allow the machines to connect to the internet.

“That is a standard thing in tabulators,” Merrill said of modems, “But we didn’t want it in ours because I never wanted anybody to question as to whether or not our system could be probed, manipulated or had vulnerabilities exposed.”

As to Lindell’s claim that Alabama’s voting machines could be accessed by Bluetooth technology, Merrill said “that’s not possible.”

“But I’ll tell you why I think he got confused,” Merrill said. “Because we also talked to him about the electronic poll books.”

“So that’s inaccurate. What he described is inaccurate, because there’s no way Bluetooth technology can be introduced to the tabulators, which people would refer to as the voting machine,” Merrill said.

Merrill said Lindell on Sept. 13 bought Alabama’s voter list, which contains all of those Alabamians who voted in the Nov. 3 presidential election, at a cost of nearly $30,000.

“He said that they were going to run some tests on the names of the people that voted,” Merrill said. “He’s not running tests on our election equipment, our tabulators or our electronic poll books. He’s not doing that. He does not have the ability to do that, and we would not turn that equipment over to him.”

Numerous failed lawsuits and Trump’s own election officials have made clear that there was no widespread voter fraud in the 2020 presidential election, with President Joe Bide won with 306 Electoral College votes and more than 81 million votes, the most ever in a U.S presidential election.

Ivey’s spokeswoman, Gina Maiola, in a statement said Ivey briefly met with Lindell on Friday, according to AL.com.

“She shared with him how successful Alabama is in running elections,” the spokesperson added. “It was a good, casual conversation. Secretary Merrill wanted to introduce them, and she is always proud to welcome visitors to Alabama.”

Dominion Voting Systems is suing Lindell and attorneys Sidney Powell and Rudy Giuliani, alleging defamation after the three made allegations that Dominion was involved in election fraud. The company is seeking $1.3 billion from each defendant.