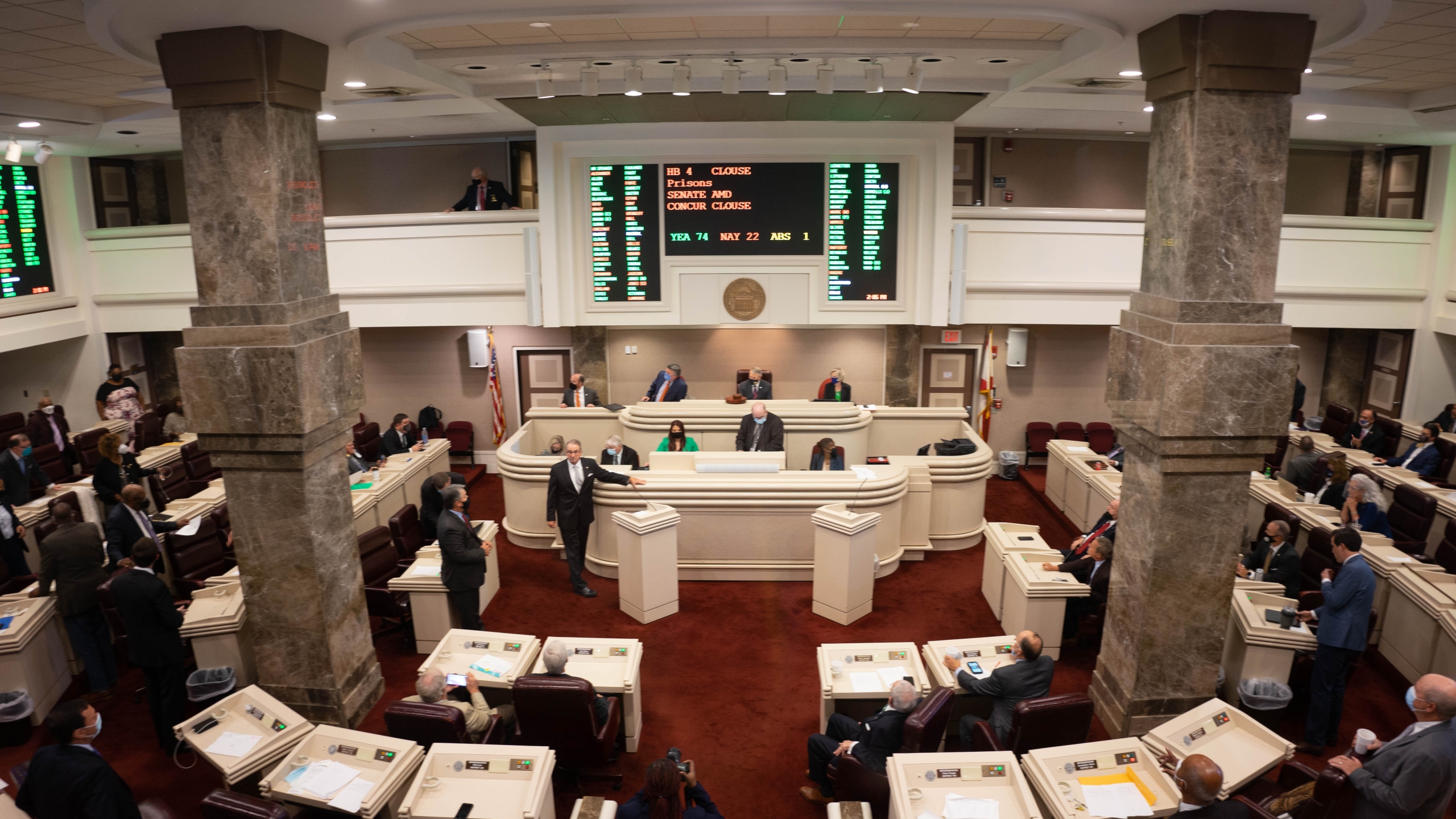 The Senate earlier on Friday approved the amended bill in a 29-2 vote, with Sen. Billy Beasley, D-Clayton, and Sen. Arthur Orr, R-Decatur, voting no. Beasley filibustered the bill in the Senate and failed to get approval for his amendment, which would have shrunk the planned two new prisons for men in Elmore and Escambia counties from 4,000 beds each to 3,000 beds.

House members without debate voted 74-22 Friday afternoon to concur with the Senate’s amended version of House Bill 4, which allows the state to borrow up to $785 million in bond issuances to construct two new prisons and renovate existing prisons. An amendment in the Senate removed the Hamilton Aged and Infirmed prison from a list of five to be closed once the new prisons are constructed.

The Senate earlier on Friday approved House Bill 5, which will allocate $400 million in federal COVID aid through the American Rescue Plan to be used toward prison construction.

Asked how the Legislature will address concerns of prison overcrowding, made clear in a lawsuit against the state levied by the U.S. Department of Justice, given that the new prisons aren’t meant to add bed capacity as several existing prisons are to close, Clouse didn’t directly answer the question at first.

Asked the question again, Clouse said the new prisons will have pods, whereas the existing prisons are set up like dorms. It should be noted, however, that the state’s prison population would likely remain the same if no beds are added and sentencing reform isn’t passed, regardless if incarcerated people are housed in dorms or pods.

“We don’t know that. No one knows that,” Clouse said when asked if the Legislature’s prison plan would be enough to address the federal government’s concerns. “This will be a continuing issue. I think this certainly moves us on down the road to be in compliance.”

Senators also approved House Bill 6, which calls for as much as $154 million of the state’s general fund money to go toward those prison construction costs, in addition to allocating $19 million from the state’s General Fund to buy the empty Perry County Correctional Facility in Uniontown from the private prison company Geo Group, to be used by the Alabama Bureau of Pardons and Paroles to house parolees and probationers who violate the terms of their release on technical matters but didn’t commit new crimes.

Supporters of the prison build plan say the new facilities are needed to replace existing, dilapidated prisons, and that new technology and the design of the new prisons will increase safety for the incarcerated and staff.

Those who criticized the plan during the weeklong session said new prisons alone won’t address the concerns laid out in the DOJ lawsuit and reports. Democrats had wanted sentencing reform to be a major part of the special session, but Gov. Kay Ivey placed just two relatively minor sentencing reform bills in her proclamation calling for the special session, which limited what bills lawmakers could debate.

Only one of those two bills made it to final votes in both the House and Senate, however, after what the bills’ sponsor, Rep. Jim Hill, R-Moody, told reporters Thursday was a lack of support from Republicans.

House Bill 1, which Hill withdrew after support caved, would have impacted certain incarcerated people sentenced before the presumptive sentencing guideline changes in 2013 by allowing them to file for re-sentencing under the current presumptive sentencing guidelines, which could result in a reduction in their sentences. The Alabama Sentencing Commission has said the bill could have impacted approximately 700 incarcerated people convicted of non-violent crimes.

House Bill 2, which was passed, will increase the number of incarcerated individuals required to be released and supervised prior to the end of their sentence. The bill makes a 2015 law retroactive for those convicted before the 2015 law was enacted.

Despite killing House Bill 1, several Republican lawmakers said during the week’s session that the work underway was just the start, and that they expected more prison reform measures to be undertaken in next year’s regular session.

Sen. Rodger Smitherman, D-Birmingham, said on the Senate floor Friday morning that the Legislature needed to take up that critical reform next year.

“We’ve got to commit that this is our priority when we come back,” Smitherman said.