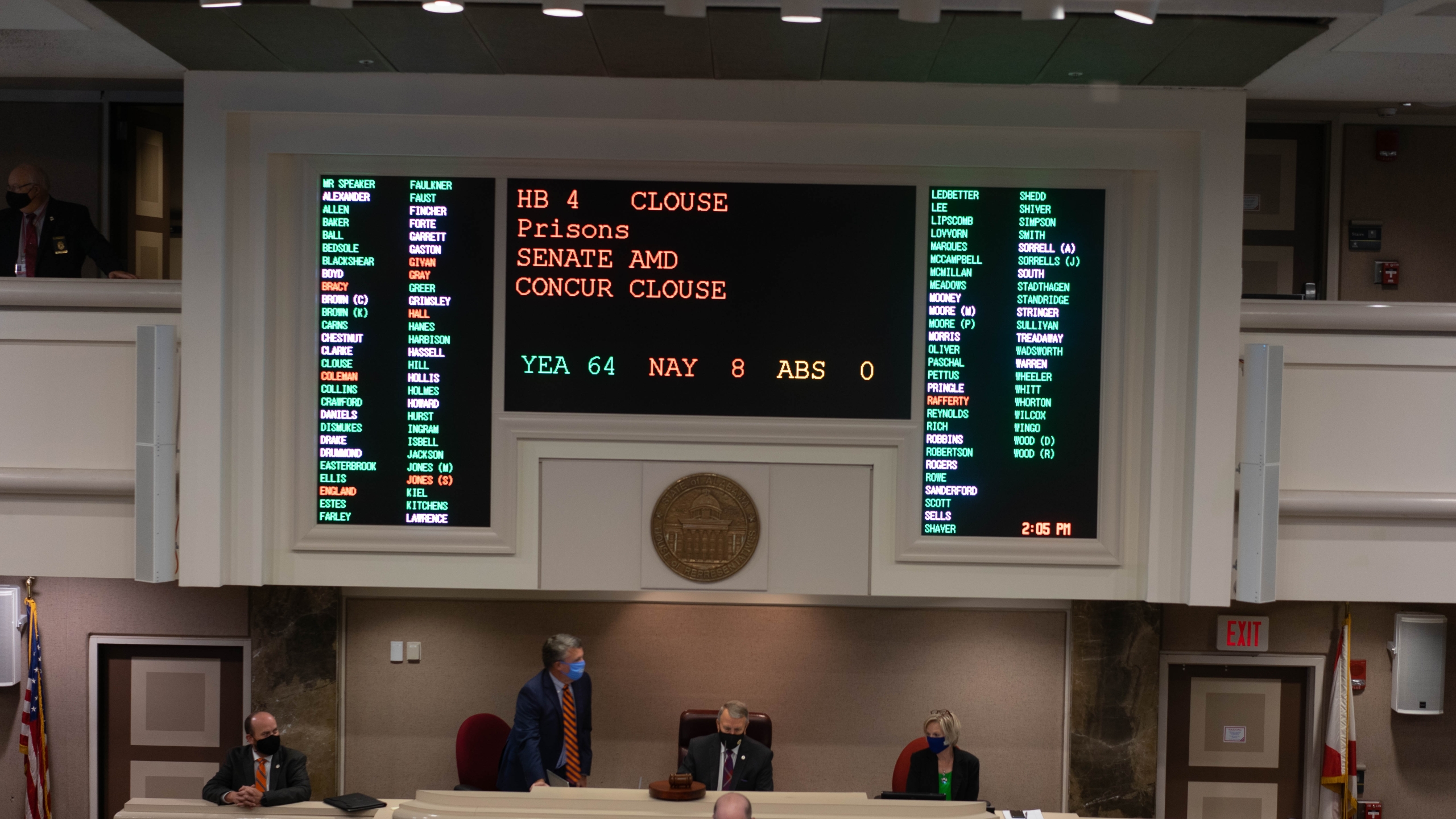 A Special Session of the Legislature is limited to 12 session days within a 30 day period.

Five bills were introduced as part of the Governor’s prisons plan and justice reform.

HB1 by Representative Jim Hill would provide for certain individuals currently incarcerated for nonviolent offenses to be eligible for re-sentencing. The bill was carried over in the House. The sponsor has indicated he will reintroduce the bill in the 2022 Regular Session.

HB2 by Representative Jim Hill would specify that certain inmates nearing the end of their sentence be released by the Department of Corrections to mandatory supervision, with certain offenders subject to electronic monitoring, by the Board of Pardons and Paroles for specified periods prior to their end of sentence. Passed by both Houses, as amended, and sent to the Governor for signature.

HB4 by Representative Steve Clouse would allow the Alabama Corrections Institution Finance Authority to issue additional bonds, in an amount not to exceed $785 million, to implement a prison modernization plan in a phased approach as follows:

Construction of a 4,000 bed specialized men’s facility on state owned land in Elmore County to provide enhanced medical, mental and other health care along with substance abuse and education programs.

Construction of a 4,000 bed men’s prison on state owned land in Escambia County.

Within one year of the completion of these facilities, the Staton, Elmore, and Kilby facilities will be closed.

The St. Clair Correctional Facility will then be closed at a time to be determined by the Department of Corrections.

PHASE 2 (After 60 percent of Phase 1 is completed)

Construction of a 1,000 bed women’s facility in Elmore County. Within one year of completion, the Julia Tutwiler Prison will be closed.

The Department of Corrections, in consultation with the Joint Legislative Prison Oversight Committee, shall perform an evaluation of men’s prison facilities based on a current facilities assessment and inmate population trends to determine if additional facility beds need to be replaced, including evaluating the Bibb Correctional Facility to determine the feasibility of repurposing the existing facility.

Passed by both Houses, as amended, and sent to the Governor for signature.

HB5 by Representative Steve Clouse would authorize the appropriation of $400 million from American Rescue Act funds to the Correctional Capital Improvement Fund. Passed by both Houses and sent to the Governor for signature.

HB6 by Representative Steve Clouse would make supplemental appropriations from the State General Fund for the fiscal year ending September 30, 2022 in the amount of $135 million to the Department of Corrections for the Correctional Capital Improvement Fund, and $19 million to the Alabama Bureau of Pardons and Paroles for the acquisition and renovation of the existing prison facility in Perry County. Passed by both Houses and sent to the Governor for signature.

With this first Special Session of 2021 completed, there is expected to be a second Special Session called by the Governor later this year for redrawing all State Legislative and Congressional seats along with the State Board of Education.