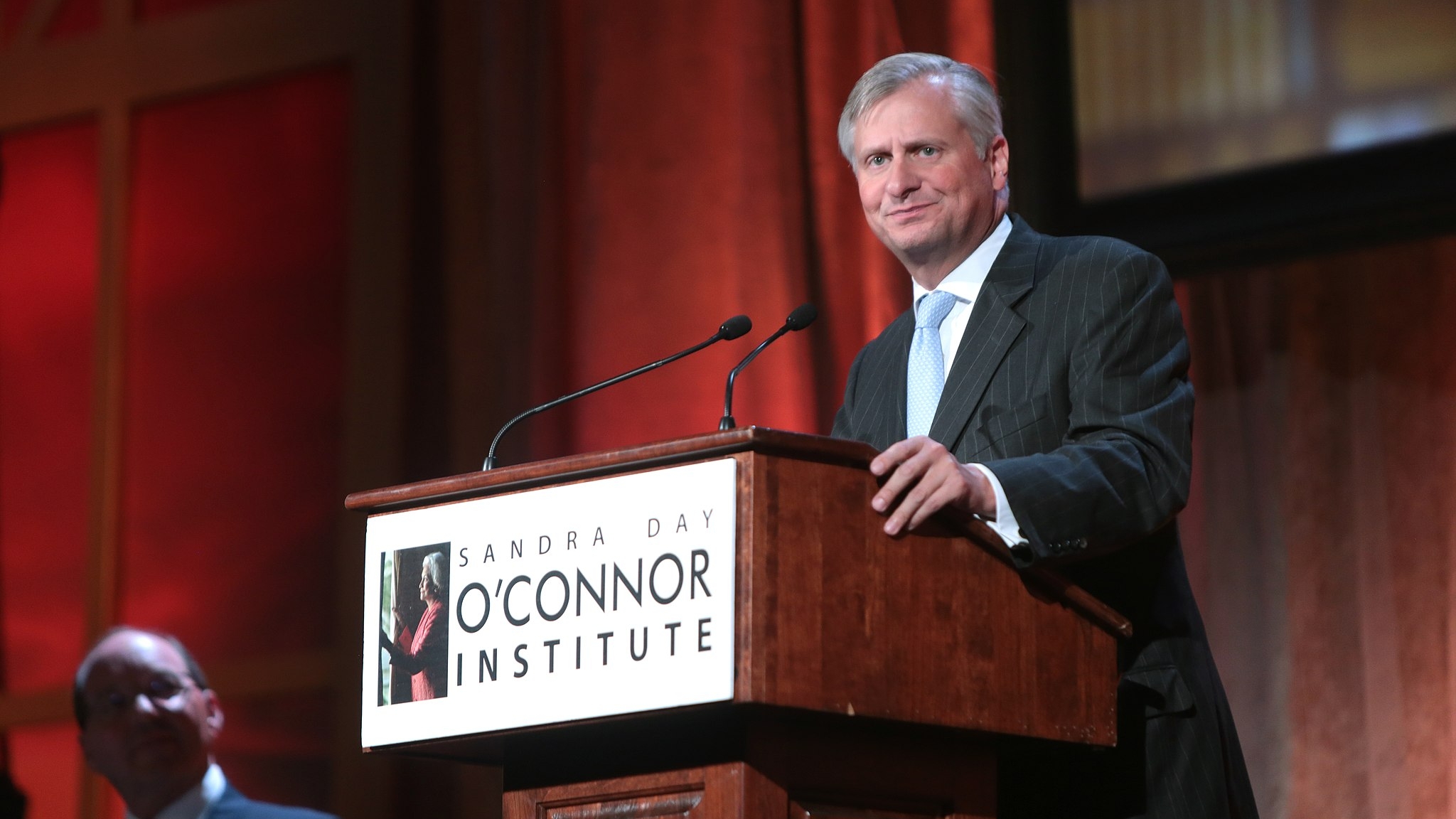 Jon Meacham speaking with attendees at the 2016 Dinner with Jefferson hosted by the Sandra Day O'Connor Institute at the Arizona Biltmore in Phoenix, Arizona. (GAGE SKIDMORE/FLICKR)

That lesson and many others on the importance of free expression and the exchange of ideas were lost recently when Samford University in Birmingham relented to the joint demands of an online petition and its Student Government Association to disinvite historian Jon Meacham from speaking about American history during inauguration ceremonies for the school’s new president.

Meacham is well-known for his presidential biographies, and he won the Pulitzer Prize in 2009 for writing American Lion: Andrew Jackson in the White House.

But the crime that got him canceled in conservative country?

From the petition: “Jon Meacham is significantly involved with the Planned Parenthood organization. He has spoken at their fundraising events, his book is used for the Planned Parenthood fundraiser, and overall his beliefs and core values do not align with those of Samford University, as it is a Southern Baptist institution.”

It’s no surprise that Meacham is liberal and pro-choice. Anyone who has ever seen him on cable news mixing his historical perspectives with his personal political preferences knows that.

But it’s disheartening to see a conservative campus community adopt the Marxist tactics of the left (and of the Pharisees, by the way) by insisting that unless you share all of their beliefs, you’re unwelcome in their midst, even if only to share your views on an unrelated issue, even if only as a guest, even if only to break bread for an evening.

Have we really reached the point in America, and in academia most alarmingly, where in order to gather to discuss a topic, everyone present must already agree on everything? Can we not see that this is a blueprint for ignorance?

Meacham wasn’t coming to one of the most conservative campuses in the Bible Belt to advocate for abortion rights. While he is indeed pro-choice, and while he did speak at a Planned Parenthood event, abortion policy isn’t his stock-and-trade. He’s a historian, and as the university noted, his lecture was going to flow from his latest book, The Soul of America: The Battle for our Better Angels, which is, rather ironically, about how our nation has overcome periods of deep, sometimes violent, political and cultural division.

To place the petitioner’s argument in its best and strongest light, they’re concerned that by giving someone a platform to speak on their campus about American history, who has also been involved with events elsewhere promoting abortion rights, it significantly tarnishes the strong, Christian reputation of Samford and weakens its ability to fulfill its mission.

Maybe so, in the minds of some.

But if you’re okay with that logic, then you’d also have to be okay with someone who happens to be pro-life being canceled from speaking where their values “do not align” with whatever progressive institution to which they may be invited to speak on an unrelated topic.

You’d also have to be okay with Brandeis University disinviting Ayaan Hirsi Ali from its campus because, as a survivor of female genital mutilation and the target of Muslim terrorists, she’s a critic of Islam.

You’d also have to be okay with the City of Atlanta sacking its fire chief, Kelvin Cochran, after he wrote about his traditional beliefs on marriage and sexuality in a book for his church’s Bible study class.

And you’d also have to be okay with the Massachusetts Institute of Technology canceling a lecture from Dorian Abbot, a professor of geophysics at the University of Chicago, simply because he supports merit-based college admissions rather than race-based standards.

Canceling someone because they don’t “align” with your tribe is exactly what the far left is doing all across America — in schools, universities, workplaces, clubs, even on sports teams — and their quest for purification and uniformity is making everybody angrier, meaner, and in the end, dumber.

And it has to stop.