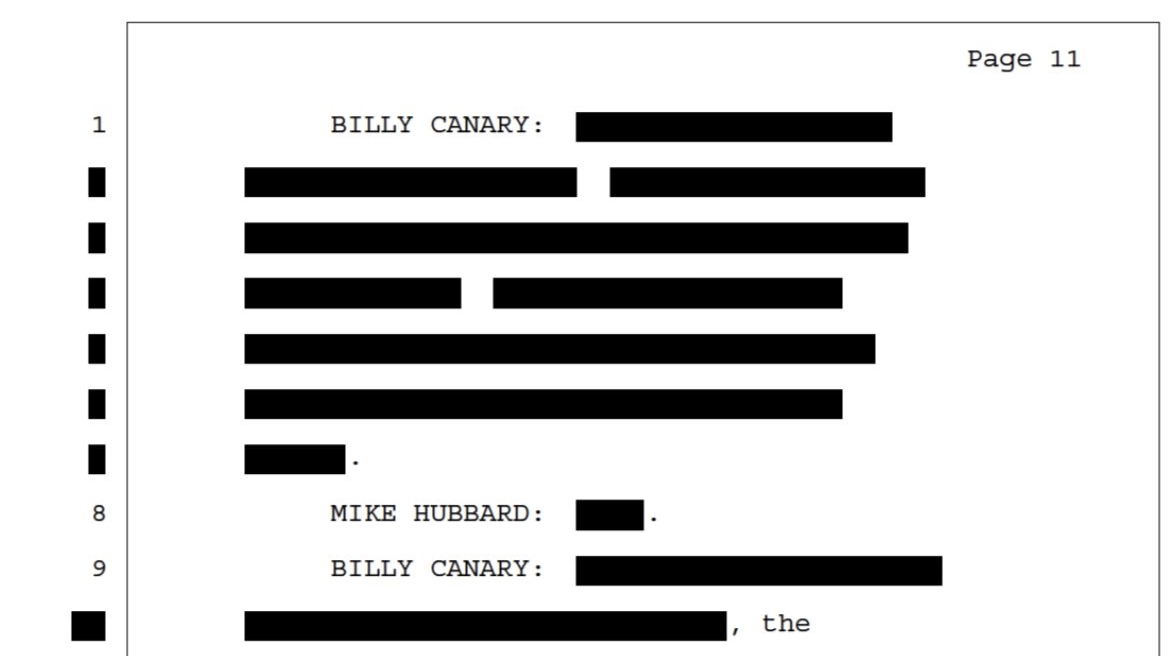 So you had to know that when the Alabama Attorney General’s Office filed a response with the court in the Mike Hubbard case that contained allegations of current Alabama legislators conspiring with Hubbard to alter criminal justice reform legislation in an effort to spring Hubbard from prison … there’s no way the names of those current lawmakers were going to see the light of day.

Not in an election year. Not with the whole state watching and waiting on the next Alabama political scandal.

They were going to bury it and then bury the shovel.

And on Thursday, that’s exactly what they did.

The AG’s office finally filed its redacted transcripts of prison phone calls between Hubbard and his co-conspirators.

The CIA would blush at the number of redactions.

Of the 348 pages filed, dozens of pages are completely redacted, with not a single word of conversation visible. All of the names of lawmakers who participated in calls or who were mentioned by the participants in calls were redacted. The names of lobbyists and friends and other interested parties were blacked out, too.

This is, after all, an election year. Political pressure is high, and you don’t move up the ladder by making public the phone calls — or even just the transcripts of phone calls — that reveal the dirty details and prison cell deal-making that goes into a scheme like the one Hubbard tried to cook up.

For those unfamiliar with the background, Alabama’s former House speaker and a handful of friends, some of whom are still serving in the legislature, came up with this three-pronged plan to get Hubbard out of prison, according to the AG’s office. He’s in there because he was convicted by a jury of 12 felony ethics counts, and he’s serving 28 months for the six felonies his pals on the Alabama Supreme Court didn’t toss.

Hubbard, his wife, Susan, his friend and former BCA head, Billy Canary, and his former attorney, Lance Bell, crafted this winning plan: 1. Write a letter to the court expressing remorse and asking for early release; 2. Get a Notre Dame law student with Alabama political ties to write a very favorable law review article about Hubbard’s case; and 3. Get Hubbard’s remaining friends in the Alabama Legislature to craft a criminal justice reform bill that includes provisions for the early release of prisoners that meet certain criteria, and make it so Hubbard meets all provisions.

We know all of this because the AG’s office tells us it’s so. And remarkably, the AG’s filing states that some lawmakers were apparently willing to go along with No. 3 in that plan, and there were phone conversations held to plan it all. Phone conversations that, like all prisoner phone calls, were recorded and stored. And the AG’s office was going to provide those recordings to the court via a thumb drive.

At that point, once the filing stamp went on the document at the Lee County Circuit Court clerk’s office, all of it — the recordings, emails, filing documents, etc. — became public records.

Except … guess what never got filed?

The recordings were mysteriously absent from the filing. Days later, when I called the clerk’s office, no one there could tell me why the AG’s office hadn’t filed the recordings with a complaint that relied upon the recordings.

A few days later, new documents were filed in the Hubbard case and they indicated that a hearing had taken place at the Lee County Courthouse and in front of Judge Jacob Walker. There was no notice of this meeting, despite the fact the clerk’s office — and Walker’s personal email — had been receiving inquiries about the case from media outlets all over the state.

We wanted those recordings.

And we wanted them because the public has a right to hear the evidence of their elected officials conspiring with a felon to improperly alter legislation.

But we didn’t get the recordings. Instead, it was determined at the secret hearing that instead of filing the actual recordings, the state would instead ask for transcripts, which could be easily redacted.

And the sanitizing began.

What was produced on Thursday is a joke. It’s the equivalent of your elected officials giving you the middle finger, patting you on the head and telling you there are some things you don’t need to know.

The redactions within the documents are absurd. They aren’t based in legal reasoning, such as protecting a law enforcement agent or maintaining the integrity of an investigation.

Instead, many appear to be redactions simply used to hide people’s names. And to hide what they did and said. To shield them from public scrutiny, despite the fact that the activity in which they were engaged was public business.

Just three days ago, the AG of this state, Steve Marshall, was on Twitter pledging “to always stand on principle and do what is right.” A laughable comment from someone with Marshall’s history in that job, and made even more laughable by these redactions.

You see, this is how we wind up with the most corrupt state government in the country every year — because we reward people like Steve Marshall for “fighting Biden” or filing frivolous lawsuits against the federal government instead of electing an AG who has solutions to Alabama problems and who can simply follow the law.

Oh, and Alabama’s history of corruption and political back-scratching is how I knew they were going to cover it up.