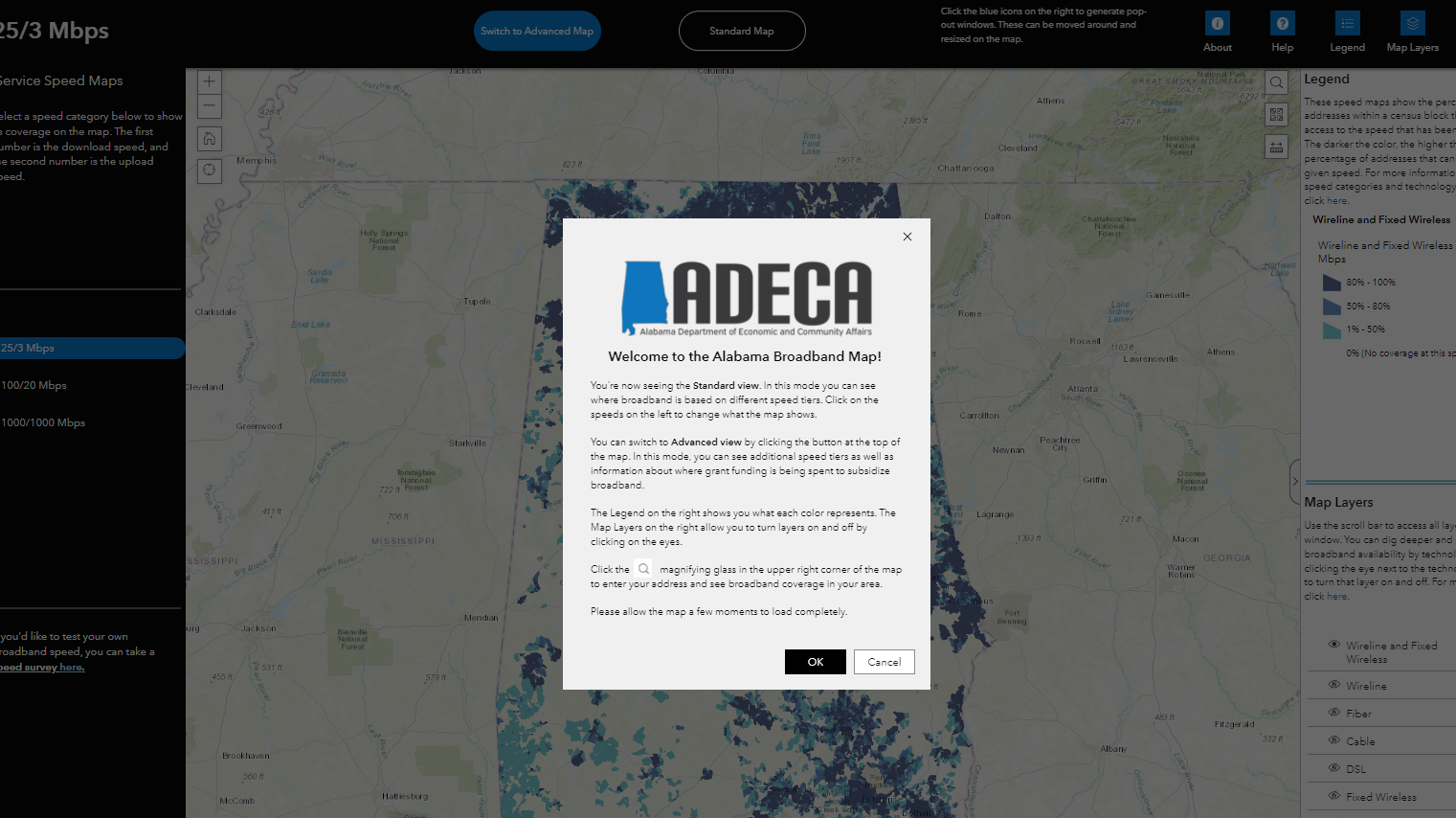 The Alabama Department of Economic and Community Affairs today released the Alabama Broadband Map, the official broadband map for the state of Alabama.

After months of collaborative work and the participation of 57 broadband internet service providers (ISPs) — the vast majority of ISPs active in Alabama – the Alabama Broadband Map will be used to better determine eligibility for state and federal broadband investment to connect unserved areas; facilitate ISPs expansion planning efforts; and provide a more accurate depiction of broadband, including speeds and technology, in each census block of the state.

Gov. Kay Ivey has long supported the expansion of broadband across the state and commended the completion of the map and plan.

“Broadband is vital infrastructure for Alabama, and this new map gives us the clearest and most accurate picture to date of broadband availability throughout the state,” Ivey said. “Expanding access to high-speed internet will help bring more jobs, improve educational opportunities and bolster our economy. I commend ADECA, the internet service providers and all others involved in this mammoth effort to create this valuable new tool that will enhance our efforts to provide broadband services to every corner of Alabama.”

Prior to the map’s creation, Alabama, like most states, had to rely on federal data that only requires ISPs to deliver service to one address in a census block to claim the entire area. Without the detail of address-level data, much of the state would be ineligible for broadband funding despite many households not actually having access to broadband services.

While the Federal Communications Commission acknowledges this current deficiency in data, improvements to its mapping system have progressed slowly. The FCC recently announced the long-awaited map updates will be delayed further, making ADECA’s mapping initiative even more valuable for the state’s efforts to support broadband expansion.

Now, utilizing ADECA’s address-level data, Alabama will be able to more accurately evaluate census blocks that are only partially served with broadband.

“ADECA is working with Gov. Ivey, the Legislature and the Alabama Digital Expansion Authority to expand access to the broadband so that Alabamians have access to the tools they need to participate fully in the modern economy,” ADECA Director Kenneth Boswell said. “We are excited about the creation of this broadband map as it gives new insights to guide these efforts while also providing resources to better inform the public.

ADECA’s effort to gain deeper insights into Alabama’s digital accessibility was made possible by the significant participation of the state’s ISPs.

The Alabama Broadband Map and website enables other uses, beyond guiding ADECA’s broadband investment. They include:

The map is the latest step in ADECA’s efforts to expand access to high-speed internet. In December, the agency established a new Digital Expansion Division, which was created through the Connect Alabama Act of 2021. The act also created the Alabama Digital Expansion Authority to oversee broadband expansion in the state. Since 2018, ADECA has awarded grants for more than 90 projects to expand broadband access to unserved areas through the Alabama Broadband Connectivity Fund.

In this article:ADECA, Alabama Department of Economic and Community Affairs, broadband, internet

ADECA will deploy the funds in the coming months through grant programs to help expand access to high-speed internet service.