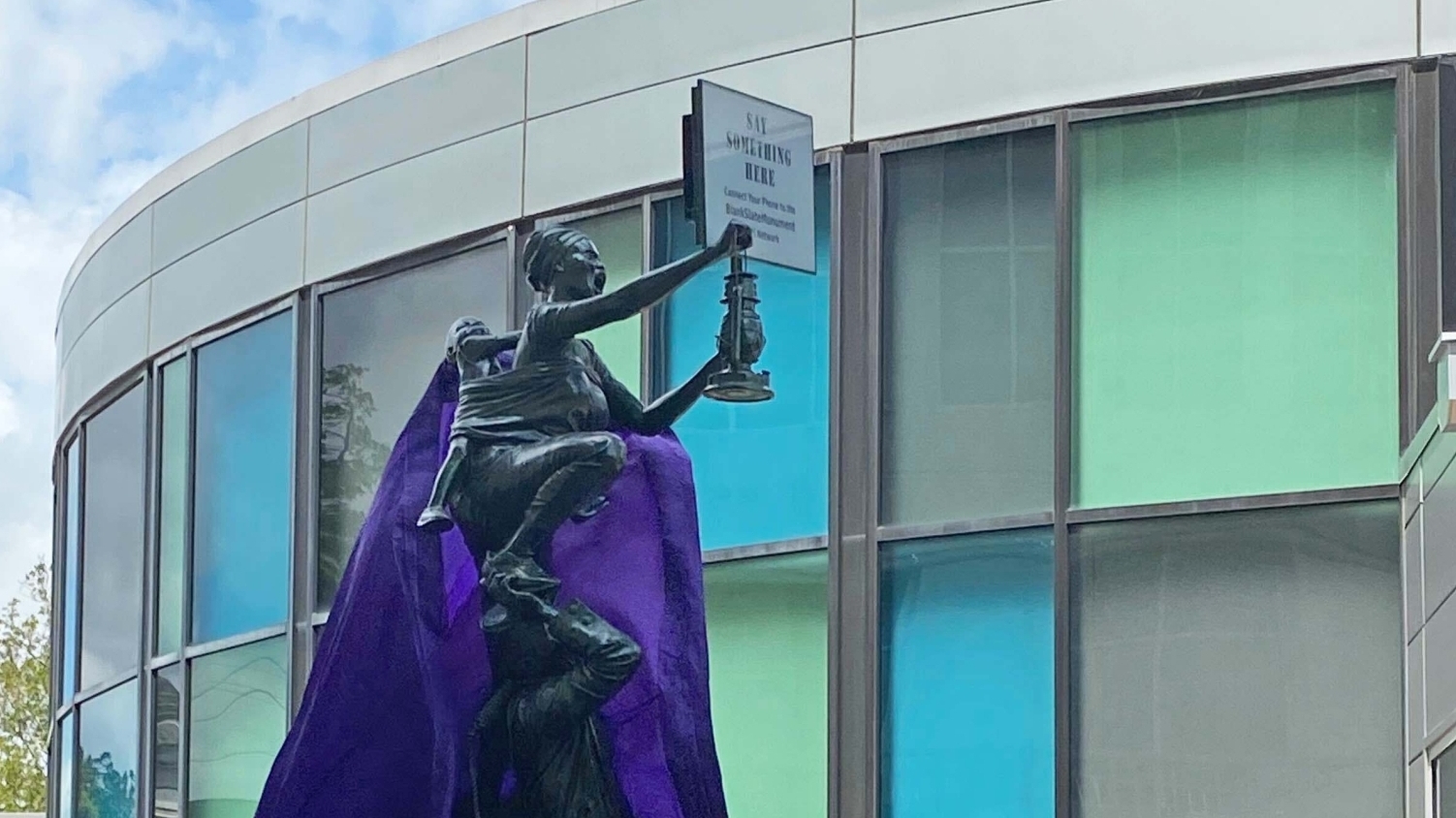 The Civil Rights Memorial Center unveiled a new interactive monument Tuesday designed to combat the prevalence of Confederate symbolism across the South.

The Blank Slate Monument, created by Ghanaian artist Kwame Akoto-Bamfo, is an interactive statue that contests the narratives promoted by Confederate memorials.

“The Civil Rights Memorial Center is honored to bring the Blank Slate Monument to Alabama and specifically Montgomery – a city critical to the civil rights movement and a city continuing to respond to injustices of today,” said CRMC director Tafeni English. “This monument serves as a reminder of the continued struggle for the liberation of Black people and the importance of preserving the truthful, rich history of Black Americans. Blank Slate also offers a unique opportunity to challenge the 175 Confederate memorials sitting in public spaces here in our state.”

The statue’s interactive component brings the community into the conversation, allowing Wi-Fi users to express their thoughts on social justice by posting their own messages on the “blank slate.” Morris Sinclair, a Blank Slate representative, provided a live demonstration to attendees during the unveiling ceremony.

“From inception, the Blank Slate Monument and her Palimpsest movement through the U.S. was inspired by the data that the Southern Poverty Law Center spent years creating and fact-checking,” said artist Kwame Akoto-Bamfo.

The statue depicts four different figures, with the base being an enslaved Black man, wincing in pain. Sinclair drew parallels to George Floyd, who was killed in 2020 when an officer held his knee on Floyd’s neck for several minutes. Standing on the back of the slave is a Black union soldier, who despite fighting for his country is shown with a noose around his neck, signifying what waited for him when he returned home.

He supports a female protestor, who wields the beacon of hope and the interactive sign to display new messages of activism. Finally, she carries on her back an infant, a sign of the future activists to come.

Earlier this year, the SPLC released the third edition of its Whose Heritage? report, data, and map, which tracks public symbols of the Confederacy across the United States. The report shows that more than 2,000 Confederate memorials are still publicly present in the U.S. and 723 of those are monuments. These dehumanizing symbols of pain and oppression continue to serve as backdrops to government buildings and halls of justice, and are prominently placed inside of and around schools, public parks, counties, cities, and military property.

“For the Blank Slate Monument to have the opportunity to join forces with the SPLC to confront America’s commitment to the Confederacy is one of our greatest achievements so far. It will take longer than our lifetimes to achieve our goal, but together we will repair this country once and for all,” said Akoto-Bamfo.

Lecia Brooks, chief of staff and culture at SPLC, said the monument bridges the gap between the civil rights leaders of the past and the continued fight ongoing today.

“Today we’re not just celebrating the work of our ancestors and our forebears who fought the struggle to bring civil rights to everyone in the United States, we are also supporting the work of activism today,” Brooks said.

The Blank Slate Monument will be featured at the Civil Rights Memorial Center through July 5, 2022.