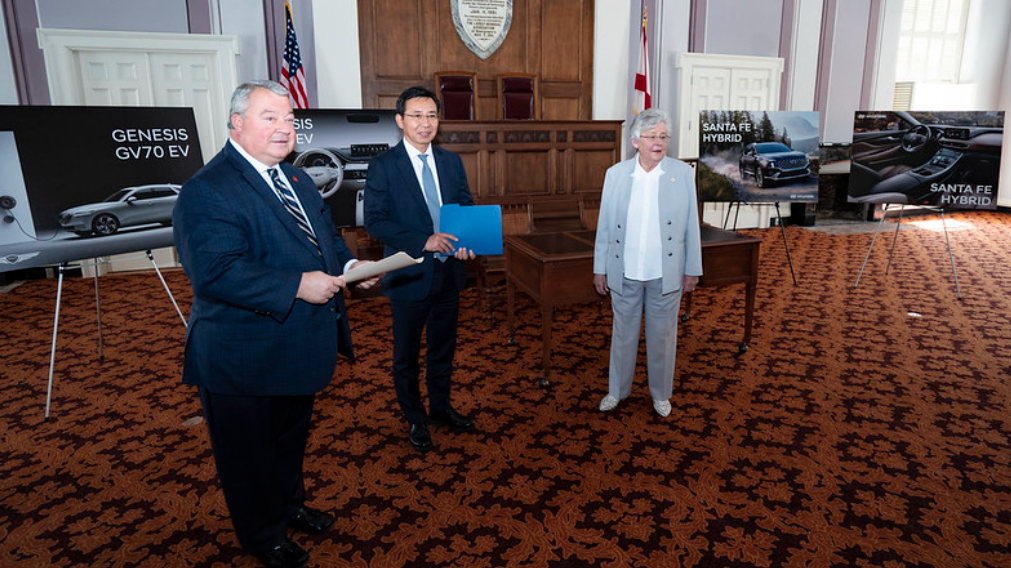 Gov. Kay Ivey at a ceremonial signing of the Hyundai plant expansion on Tuesday.

Hyundai Motor Manufacturing Alabama on Tuesday announced the company will build the hybrid version of its Santa Fe sport utility and the first electric Genesis GV70 SUV at its expanding Montgomery factory.

The $300 million expansion will create 200 jobs, according to a press release from Gov. Kay Ivey’s office.

“Over the years, we have developed an enduring partnership with Hyundai, and it’s been great to witness the profound economic impacts of the company’s continued investments in Alabama,” Ivey said in a statement. “Hyundai’s new growth plans in Montgomery will help prepare the state’s auto industry for the EV revolution while also aligning with our strategic initiatives such as Drive Electric Alabama.

Greg Canfield, secretary of the Alabama Department of Commerce, said in a statement that the introduction of EV production at Hyundai plant positions the Montgomery plant for the future in an industry that is rapidly shifting its production focus to electric models.

“With this EV expansion, Hyundai is again demonstrating that Alabama’s auto sector is concentrating on what the future holds for the industry and that it will continue to evolve to meet all challenges,” Canfield said. “This is an exciting development both for Hyundai and for our dynamic automotive manufacturing sector.”

Montgomery Mayor Steven Reed in a statement praised Hyundai for its strong support of the Alabama manufacturing plant.

“Hyundai and Montgomery have a powerful partnership,” Reed said. “We look forward to continuing to strengthen this relationship in the coming years and working to support this tremendous investment.”