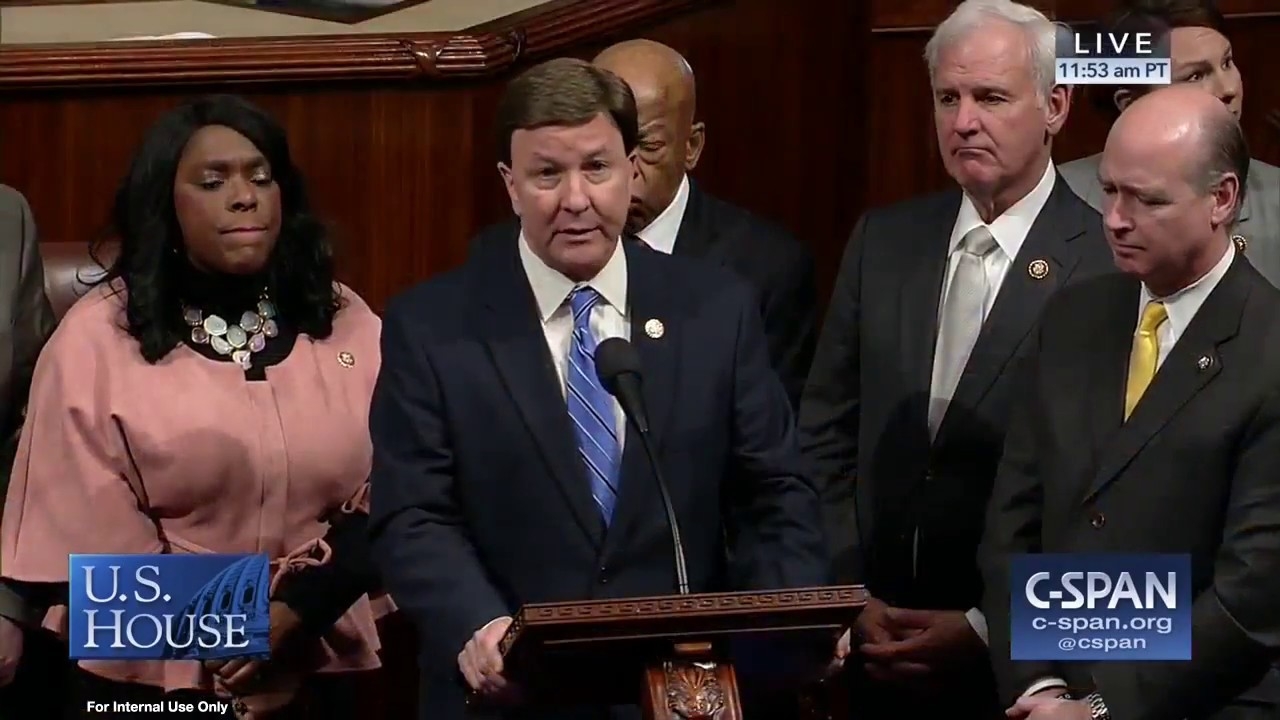 Congressman Mike Rogers speaking on the floor of the U.S. House with other members of the Alabama Congressional Delegation. (VIA CSPAN)

For several years leading up to the 2010 Census count, the national projections were that Alabama would lose one of our seven congressional districts and drop to six. When the count was taken, we surprised ourselves and the nation and kept our seven seats in the United States Congress.

Therefore, the legislature’s task in drawing our seven congressional districts was relatively easy. Except for some tweaking here and there due to growth in Madison, Limestone, Lee, Shelby and especially Baldwin counties, and the loss of population in the Black Belt, our congressional district lines were kept basically the same as they have been for the past few decades.

We essentially have six of our seven districts that are safe Republican seats. We have one dedicated majority minority African American Democratic Congressional District.

That Democratic seat is held by Congresswoman Terri Sewell. She has been in that seat for over a decade and has become a respected leader in the Democratic House leadership. The Democrats are in the majority which makes her a powerful member of the House. However, most political experts and polling indicates that this year’s election will bring a swing of 30 or more Republican seat pickups or takeovers, thus making the Republicans the majority party. This will be beneficial for Alabama since six of our seven seats are held by Republicans. It will be particularly beneficial to folks in the fourth district, who have Robert Aderholt, R-Haleyville, as their Congressman.

Aderholt is the most senior member of our delegation and is the ranking Republican on the House Appropriation Committee.

Congressman Mike Rogers, R-Anniston, is also gaining ground in seniority. He is a ranking member of the Armed Services Committee.

Congressman Gary Palmer, R-Jefferson, represents the suburban areas of metro-Jefferson, Hoover and Shelby. It is considered one of the most Republican House districts in America.

We have two freshmen Republican Congressmen, who are finishing their first two years in the House. Jerry Carl, R-Mobile, represents the coastal first district of basically Mobile and Baldwin Counties. He has taken to Congress like a duck to water.

Barry Moore, R-Enterprise, represents the second district made up of the Wiregrass and the fast growing Pike Road area of Montgomery as well as the populous counties of Autauga and Elmore.

All six of the aforementioned incumbents will be reelected without opposition.

The only excitement in Congressional politics in the Heart of Dixie will play out in the fifth district. This Huntsville-Tennessee Valley seat is currently held by Mo Brooks, who has opted to run for the U.S. Senate, thus leaving a seldom seen open congressional seat contest. There are six Republicans vying for this open fifth district seat.  The contestants are Dale Strong, Paul Sanford, Casey Wardynski, Harrison Wright, Andy Blalock, and John Roberts.

Madison County Commission Chairman Dale Strong appears to be the strongest candidate. He is far outdistancing the field in polling and fundraising. Some say that he could eclipse the field without a runoff.

There will be a large turnout in this congressional race. In fact, this Huntsville-Madison-Limestone Tennessee Valley area of the state will more than likely have the largest percentage turnout in the state. Not only is there an open congressional seat, but Mo Brooks is the local candidate for the open U.S. Senate Seat, and popular, incumbent Republican state school board member, Wayne Reynolds, will also be on the ballot with token opposition.

In addition, the only hotly contested Republican State Senate race between Tom Butler and Bill Holtzclaw is in the Madison-Limestone area. There are also three open hotly contested State House races, including filling the seats of Speaker Mac McCutcheon and veteran House member Howard Sanderford. There is also a hotly contested open sheriff’s race in Limestone County. Furthermore, the phantom candidate for the U.S. Senate, Mike Durant, claims Huntsville as his home. All of these ingredients are a recipe for a larger turnout in the Tennessee Valley than the rest of the state on May 24.

The Congressional lines and six of seven congressmen will remain the same for this 2022 election cycle. However, hold the phone.  The federal courts could change that for 2024.

Steve Flowers is Alabama’s leading political columnist. His weekly column appears in over 60 Alabama newspapers. Steve served 16 years in the state legislature. Steve may be reached at:  www.steveflowers.us.