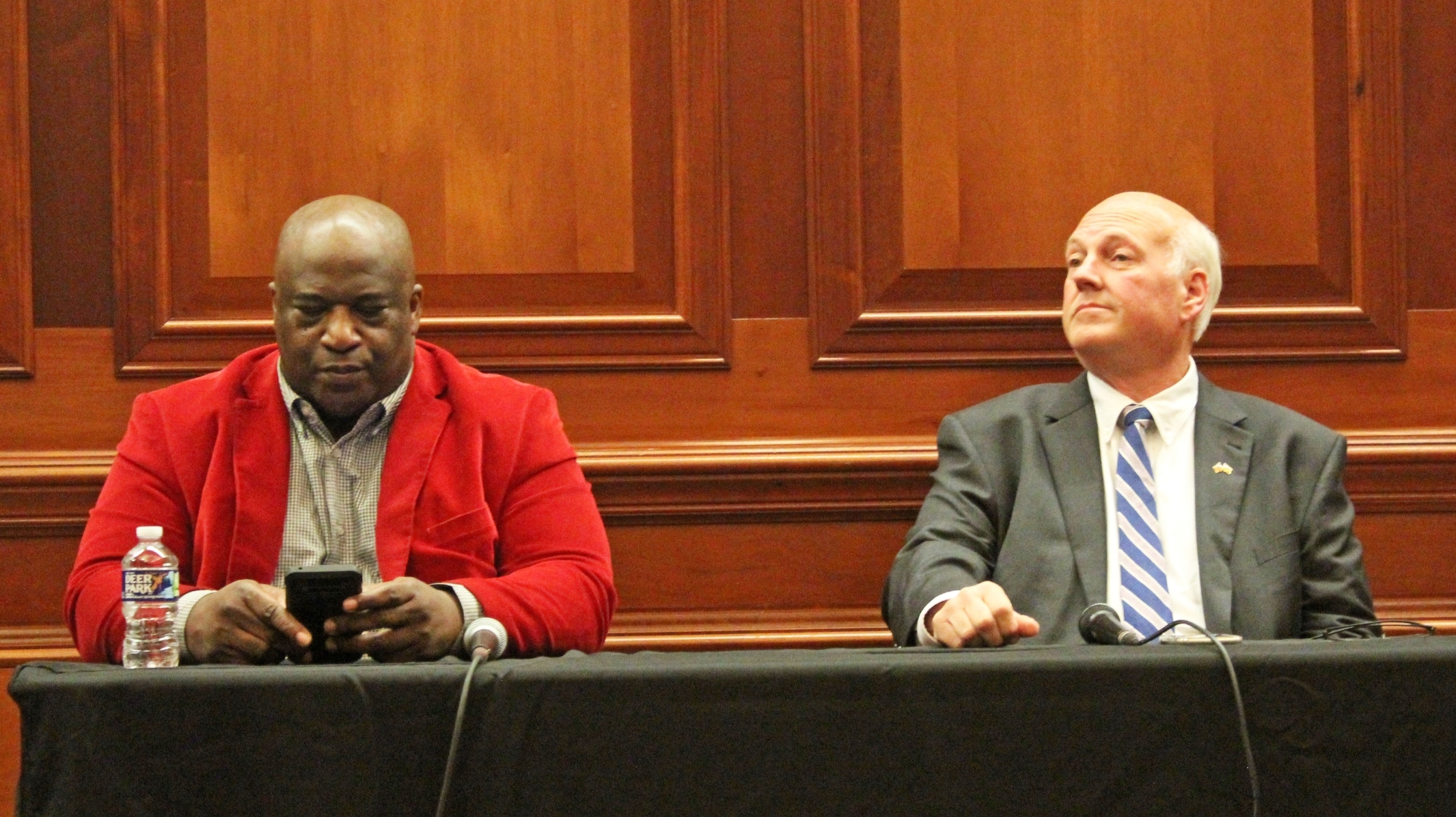 Secretary of State candidates Christian Horn and Ed Packard participate in a forum Tuesday hosted by the League of Women Voters of Alabama. (Jacob Holmes / APR)

Secretary of State candidates Ed Packard and Christian Horn answered questions about their campaigns Tuesday evening at a forum hosted by the League of Women Voters of Alabama.

Fellow Republican candidates Wes Allen and Jim Zeigler did not attend the event — LWVA Director Kathy Jones said Allen declined due to a scheduling conflict and Zeigler backed out Tuesday morning due to an illness.

That didn’t stop Horn from criticizing their absence at the forum.

“If someone wants your vote and they’re running for Secretary of State, they should be sitting here next to me and Ed,” Horn said. “They’re not here, they didn’t show up. So if they don’t show up now, how do you expect them to show up and represent you in the future?”

The LWVA kept answers to 90 seconds and directed all questions to be for both candidates and only about the requirements of the office. That prevented more inflammatory lines of questioning, including the topic of workplace sexual harassment claims made against Packard in December 2021. He resigned from the Secretary of State’s Office within the month, although he has denied the allegations.

For the most part, the two Republican candidates gave similar answers on the nuts and bolts issues.

Horn talked about his history of being the great-great-great-grandson of slaves that arrived in America on the last slave ship, the Clotilda.

“My hope is to be the dream of those who once upon a time served our country and when they came home, they could not defeat Jim Crow,” Horn said.

When asked about ensuring access for certain marginalized groups such as the disabled, homeless and out-of-area college students, Horn said he knows what it is like to be a marginalized group as a Black man and formerly being paralyzed from the neck down.

“So the first thing is the Secretary of State must not be bureaucratic, but they must lead from the heart,” Horn said. “They must have a heart to hear the concerns of those people, my people and those communities that I’ve been a part of, and certainly be able to listen to the organizations that represent their interests and have an open door— but it’s a heart-based leadership.”

Packard also said he would want to work with marginalized groups, adding that he has already been working with the National Federation of the Blind.

“I’ve been working with the Alabama Disabilities Advocacy Program over at the University of Alabama to work on legislation to make voting for people with disabilities easier,” Packard said. “And what I have put out ever since I got involved in this race back in December, is that we should allow those individuals who are disabled to vote the same way we allow overseas, military and US citizens to vote and that is electronically from the comfort of their home.”

However, both candidates stated their opposition to early voting and no-excuse absentee voting.

“I believe that to support our community and our sense of community, we do need in-person voting,” Packard said. “We do not need early voting or no-excuse absentee where it’s just done willy nilly from home. I just feel very strongly that, particularly in this day and time where our sense of community seems to be shattering or fracturing all the time, we need to do things that build that community, not further divide it or allow for it to be divided.”

Horn said he believes voting is so “sanctified” that it is “critical” for voters to go in person.

“We need to make exceptions that are rare and exceptional, that we’re able to do something to that; otherwise we open the floodgates and we don’t don’t stick to our norms of our state,” Horn said.

“I think we’re very, very vulnerable to cyber security concerns, because we’re not uniform in the platforms and the protection that we need,” Horn said. “We need people with that kind of experience like myself, the people who are going to be in our circle to know that we must protect these computer systems and these databases, these these electric grid systems, everything that’s connected to voting is at a high risk right now

Packard said there are security challenges, but does not believe the voter file is at any high risk of being hacked.

“We are in a statewide dedicated system that is uniform across the state and it has very high security already,” Packard said. “One area where I do think we need to improve is with our voting machines. Right now, state law does not prohibit our voting machines from being connected to the internet.”

Although the electronic voting committee voted unanimously against approving any voting machines with remote connectivity, Packard said that still needed to be codified in legislation.

He also suggested the need for greater penalties for violating election laws.

Packard also took aim at a bill signed into law in the previous legislative session by opponent Wes Allen, R-Troy, that criminalizes the acceptance of private funding for use in the administration of elections.

“They made that a Class B felony. That’s a $3,000 fine or six months in jail,” Packard said. “If people are bringing money in to corrupt the system that is totally inadequate, and it only applies to the county or state election officials that take the money. It does not apply to the people pumping the money in to corrupt our system. That needs to be fixed both in terms of who the law applies to and what the penalties are.

“I also believe that if you commit a felony election crime in Alabama, you should lose your right to vote until you get a full pardon from the State Board of Pardons and Paroles. Right now, although there are many felony crimes that lead to losing your voting rights, being convicted of a felony election crime does not affect your right to vote in the state of Alabama. That’s a problem. That’s a travesty and that needs to be fixed.”

Horn pushed a “real-time” database for the voter rolls, which Packard agreed with but stated that much of that is not in the Secretary of State’s control, such as notices of death.

“There’s a lot of bureaucracy that goes on behind the scenes when someone is deceased,” Packard said. “It takes a little time for public health to collect that information and pass it over to us.”

Horn said the office needs to use every platform available to reach potential voters, including the old-fashioned techniques such as publishing voter rolls in newspapers as well as through email and other internet platforms.

“We need to reach this next generation on the platforms that they actually live, work and play on,” Horn said.

Packard talked about his involvement in providing online voter registration tot he state and said he agreed that “technology should be leveraged” to contact citizens, as long as their data is protected and that they aren’t being “spammed” with unwanted messages.

Both candidates were asked about their vision for the usage of the Secretary of State’s social media platforms and whether they should be used to promote personal opinions.

Horn said he would use the social media outlets to give citizens a sense of who their elected official is and instill trust.

“We want to say ‘I’m the guy who’s going to protect your vote. I’m the guy who you can knock on my door and get answers to,’” Horn said. “That’s critically important, I believe, because you want to take responsibility.”

The Republican primary for Secretary of State is May 24. Both candidates committed to returning for a general election forum with the Democratic nominee if elected in the primary.