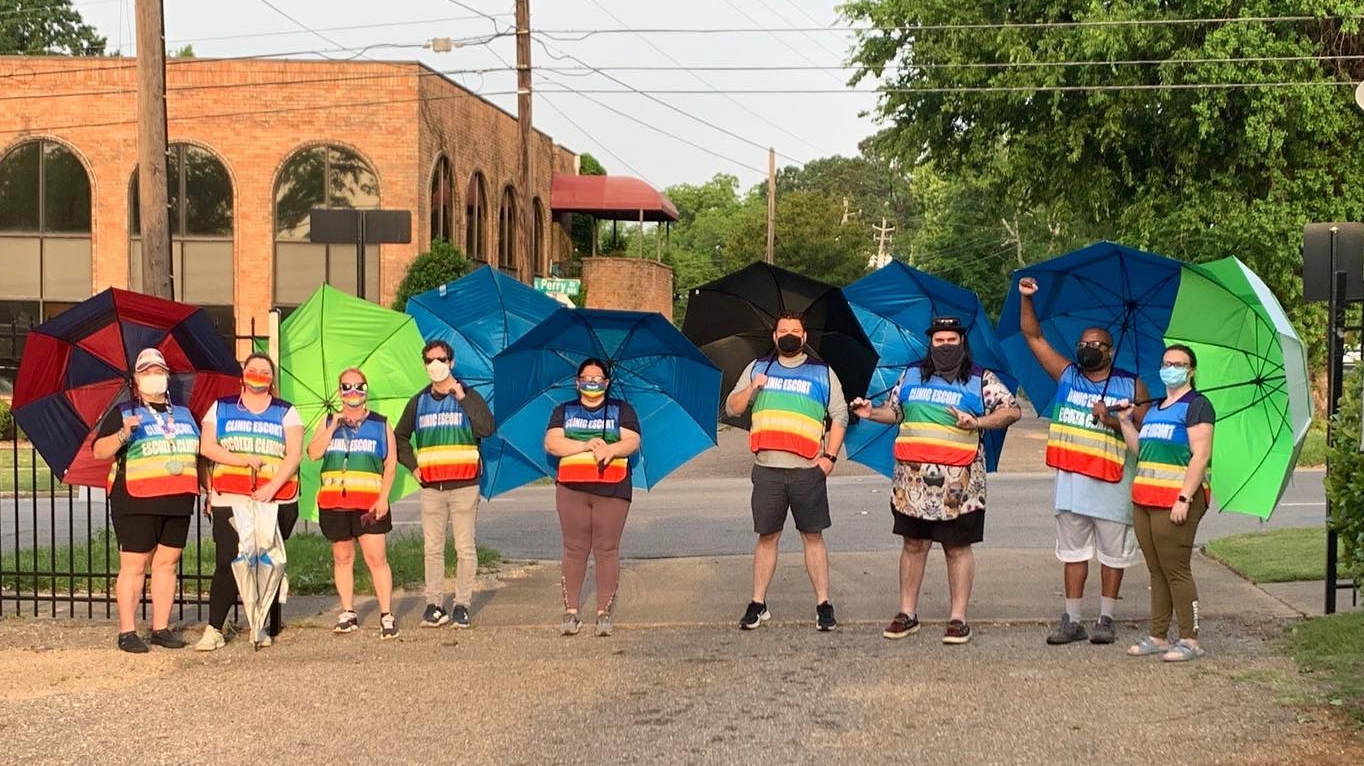 Local organizers are speaking out about what the potential overturning of Roe v. Wade would mean for Alabamians.

A group of around 50 people turned out Tuesday evening, May 3, to the Alabama Statehouse to protest the potential overturning of Roe v. Wade.

Mia Raven, executive director of P.O.W.E.R. House, a local reproductive health services coalition, helped organize the protest and spoke out about the importance of reproductive services.

“We are located next to the abortion clinic in Montgomery,” Raven said. “I also work inside the clinic.”

Raven said the Montgomery clinic serves most of South Alabama.  Raven said on clinic days, they see on average 20 to 30 people but have seen up to 50 patients in one day.

The clinic escorts aim to be a kind, friendly face in what can be a stressful environment with protestors.

The organization also offers a spacious porch at the P.O.W.E.R House for companions and patients who need to take a break from waiting at the clinic, to use their cell phones, smoke, etc. Volunteers serve as a shield between patients and the protestors.

Since children are not allowed into the clinic, companions are able to stay at P.O.W.E.R House while the patient is inside the clinic.

P.O.W.E.R House is also able to offer a place to stay for a limited number of low-income patients.

Hartline said she came to know about abortions in Alabama when she thought she might need one year ago. She wound up not needing one, but her experience with how people were treated sparked an interest in her and then she linked up with Raven.

But what keeps her going back day after day to the clinic?

“Every person who walks into the clinic keeps me going,” Hartline said. “No one really wants to be at the clinic. It’s a very jarring thing.”

Raven said they face protesters nearly every day the clinic is open.

“It’s difficult when you have 10 to 15 people screaming at you,” she said.

Hartline also spoke about the protestors.

“We get called all kinds of stuff,” she said. “I’ve been called a pedophile and whore. They try to make it personal and really unpleasant.”

She fears that banning abortion will be a blow and setback to women in Alabama and across the nation.

“People do die from complications from pregnancy,” she said. “I’m old enough to remember sepsis wards. We are going back to those days if Roe is overturned. It’s a dang right dirty shame that people would be forced to give birth.”

Hartline is also extremely concerned about the loss of life if Roe v. Wade is overturned.

Hartline spoke about the financial struggle that banning abortion in Alabama would put on women who need to go out of state to get an abortion. Hartline said many of the women seeking abortions are low-income women.

“If they have to go out of state and have children, they have to get child care for three days and find someone to keep their children and a place to stay,” Hartline said.

Currently, it costs $150 for a pre-op visit and ultrasound at Reproductive Health Services in Montgomery and $600-$900 for abortion depending on gestation.

“P.O.W.E.R. House won’t go anywhere,” Raven said. “Even if that means we have to be in the clinic until 11:59 the night before (the law takes place). Even if the clinic closes, we will stay open to help those who will need to travel outside of Alabama to obtain abortion care. There’s not many people who can navigate the complex laws and abortion clinic systems than people who have worked inside clinics and volunteered at clinics – that’s us.”