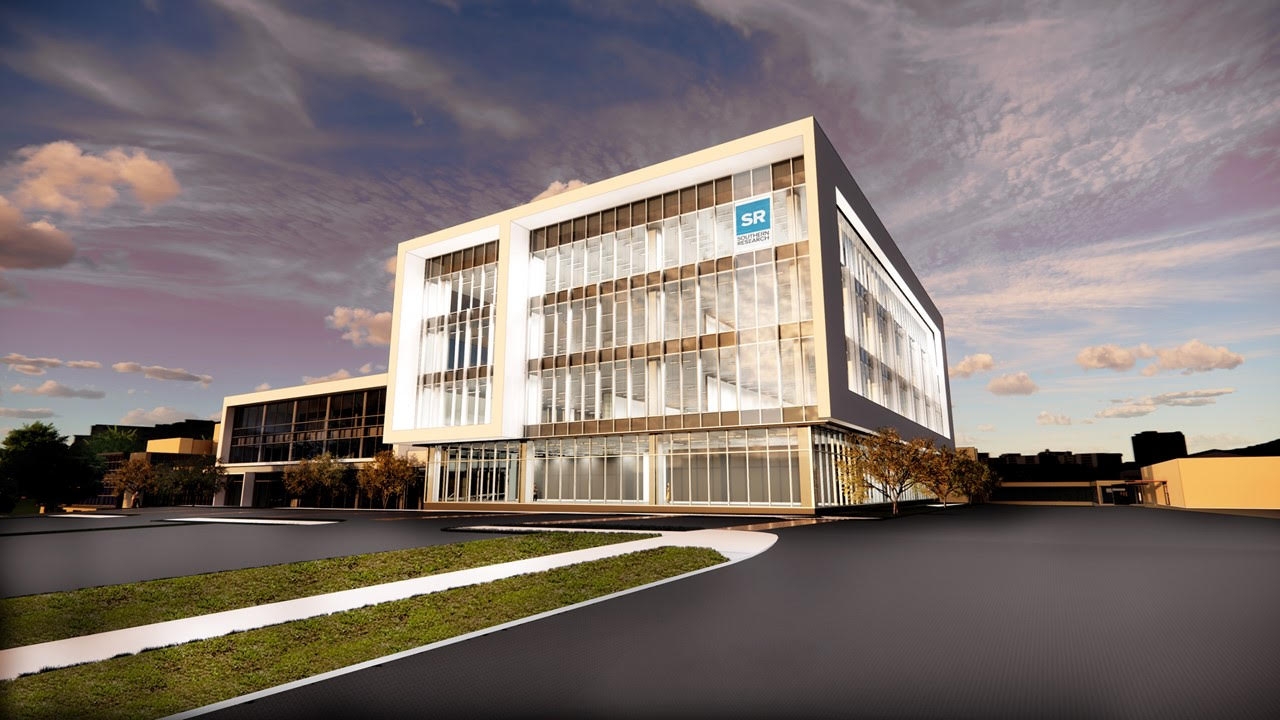 Southern Research Birmingham a rendering/concept for the new building.

Southern Research today broke ground on a flagship biotech center that will anchor the development of 200,000 square feet of new or renovated wet lab space for life sciences. The new facility, located on the corner of Richard Arrington Jr., Blvd., and Ninth Avenue South, will double the organization’s lab space for researching infectious diseases and greatly expand its work to develop new treatments for cancer and other serious illnesses.

The new center is expected to create 150 new jobs at Southern Research and to double the institution’s annual economic impact to $300 million a year.

“This project represents a major investment in the city of Birmingham and in the great work being done by our Southern Research team,” said Josh Carpenter, Ph.D., president and CEO of Southern Research. “It builds on our strengths and puts us in a position for dynamic growth in the future.”

The Alabama Legislature included $45 million for the Southern Research building in the state budget for 2023, marking the state government’s first-ever investment in the 80-year-old campus.

“This represented an opportunity to create high-paying jobs in Birmingham and to support one of the state’s most important industries,” Gov. Kay Ivey said. “Scientific and technical innovation is a major driver of Alabama’s economic growth, and Southern Research has long been a key player in making it happen.”

In addition to expanding space for research on infectious diseases like COVID-19, the new facility will allow Southern Research to ramp up its efforts to target common diseases that have a profound impact on the well-being of Alabamians and communities.

In addition to this new facility, Southern Research plans to renovate much of its campus and build new space to advance genomic diagnostics work over the next few years.

The city of Birmingham and Jefferson County have each been asked to provide funding alongside Southern Research and the State of Alabama to help accelerate this capital investment. While the contributions have not been approved at the City or the County, officials on both sides of Linn Park expressed support for the expansion.

“This is a transformational moment for Southern Research and for Birmingham,” said Birmingham Mayor Randall L. Woodfin. “As someone who benefited from a COVID-19 treatment developed with Southern Research’s experts, I am especially grateful to the scientists who work here and I’m proud to help them take their work to the next level.”

As Economic Development Committee Chair of the Jefferson County Commission, Steve Ammons called the Southern Research project yet another example of local leaders working across partisan and jurisdictional lines to benefit the entire Birmingham metro area.

“When we work together, we can do big things,” Commissioner Ammons said. “This expansion at Southern Research is an important project that will create economic ripples across this county and state.”

Ray Watts, MD, president of the University of Alabama at Birmingham and chair of the Southern Research board of directors, said the new facility will help fulfill his vision of creating a world-class biotech corridor that stretches from the UAB campus to Southern Research and Ascension St. Vincent’s Birmingham.

“Between UAB and Southern Research, we are working to ensure that Birmingham and Alabama become the biotech commercialization center of the Southeast,” Watts said. “This new facility will help us incubate new biotech entrepreneurs and attract top talent to this area. Southern Research and its vision for this center are intricately tied to the future success of Birmingham.”

Alongside the new construction, Southern Research has contracted Brasfield & Gorrie to help renovate more than 40,000 square feet of its existing campus facilities in Birmingham’s Southside. Investments include building out more vivarium space and launching a new clinical diagnostics lab.