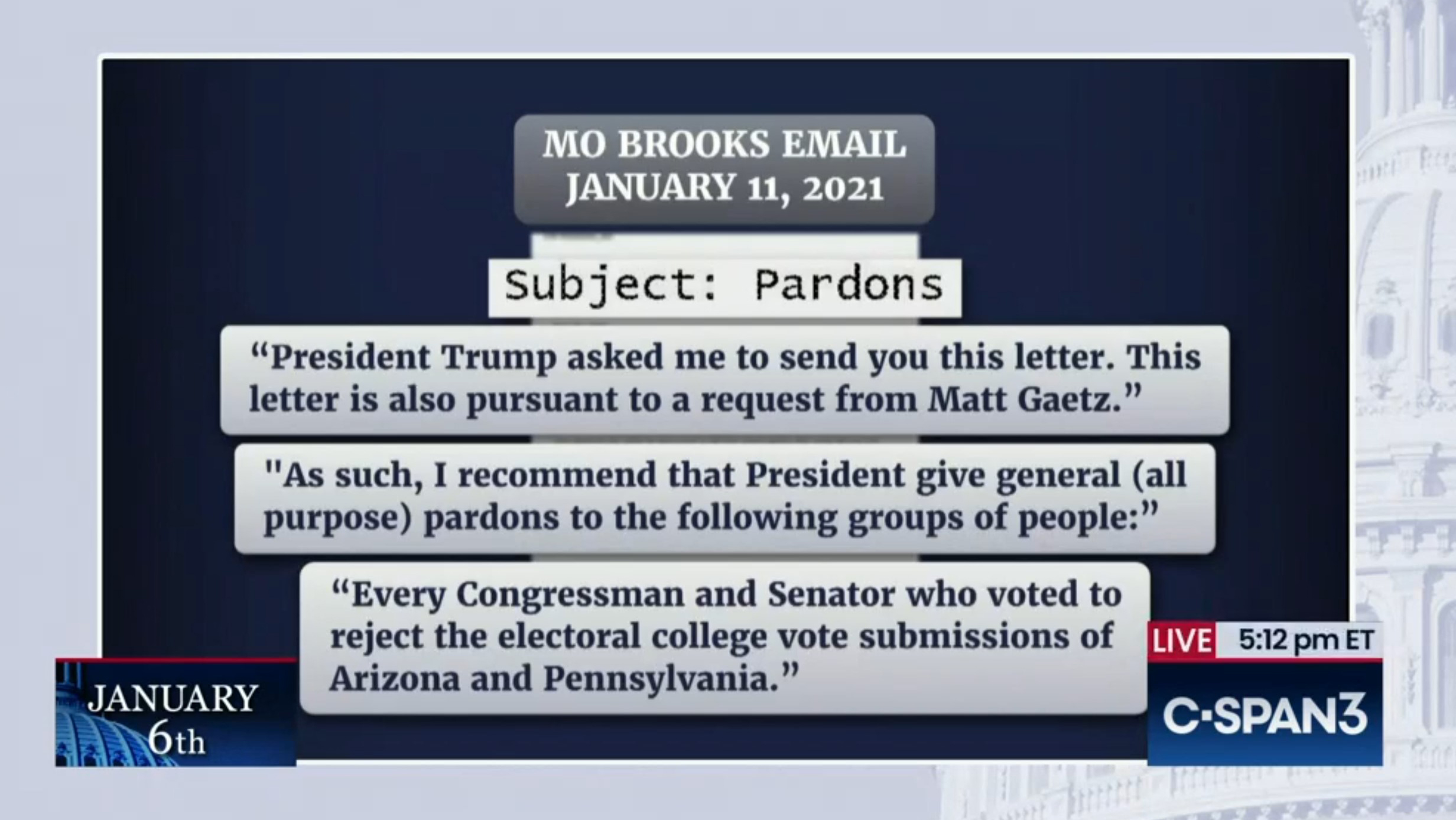 An exhibit from the January 6 committee hearing showing an email sent by Congressman Mo Brooks requesting a pardon from President Donald Trump.

Alabama Congressman Mo Brooks asked former President Donald Trump for a pardon in the days after the Jan. 6 Capitol insurrection, and also asked that the president pardon Florida congressman Matt Gaetz and more than 140 other Republican congressmen and senators who signed onto a Texas lawsuit and voted against certifying the 2020 election results.

In a letter revealed by the Jan. 6 Committee, which held its latest public hearing on Thursday, Brooks wrote to Molly Michaels, Trump’s former executive assistant at the White House, to ask for the “blanket pardons.” Brooks letter claims that he feared “socialist Democrats” would abuse the U.S. Justice Department and wrongfully prosecute Republicans who pushed the Big Lie rhetoric that the 2020 presidential election was stolen.

Brooks and several other Republicans spent weeks both before and after the November 2020 election claiming massive fraud and attempting to cast doubt on the results by claiming that efforts to make voting easier during a worldwide pandemic were instead part of a sinister plot to “steal” the victory from Trump. More than 100 investigations into those fraud claims, along with dozens of audits of voting processes, have revealed no more than average fraud cases, and in numbers well below the amounts necessary to alter the presidential election outcome.

In a response to “Rolling Stone,” Brooks released the full text of the email he sent and said his cause for asking for the pardons was exactly what was stated: He “feared that Democrats would … jail Republicans” for exercising their first amendment rights.

However, Brooks was not done releasing documents. Also on Thursday afternoon, Brooks released a formal response to the Jan. 6 Committee, in which he agreed to testify if the committee would honor his list of conditions: that his interview be public, that only congresspeople ask questions, that the questions be limited in scope to Jan. 6, that he be provided beforehand any documents the committee plans to reference and that his interview coincide with a date in which Congress is expected to be in session.

Brooks’ testimony could be key to the committee’s investigation, which appears headed towards a determination that Trump and his closest advisors concocted a scheme to both hold power and fundraise off of anger they stoked in numerous voters. Brooks has been accused of playing a central role in the planning of various rallies and was one of the first lawmakers to publicly back Trump’s claim of election fraud.

Brooks also has made public statements in recent months – particularly in the days after he lost Trump’s endorsement in his failed U.S. Senate bid – that appear to indicate that Trump was actively recruiting congressmen to a scheme to undermine the election.

In a TV interview in March, Brooks provided specific details of a conversation he had with Trump, during which Trump repeatedly asked Brooks to help “rescind the election.” Brooks said he told Trump that what he was asking was illegal and impossible.

Other elected officials from swing states, such as Georgia and Arizona, have recounted similar conversations with Trump and his associates in the days following the 2020 election. Many of those state officials, all of whom were Republicans, recounted in detail the shocking ways in which they were pressured and threatened – and in some cases turned into public scapegoats – for refusing to commit illegal acts or violate the constitution.

Much of Thursday’s testimony, which centered around the manner in which Trump and his team misused the Department of Justice, came directly from Trump’s closest staffers, who detailed their conversations with lawmakers.