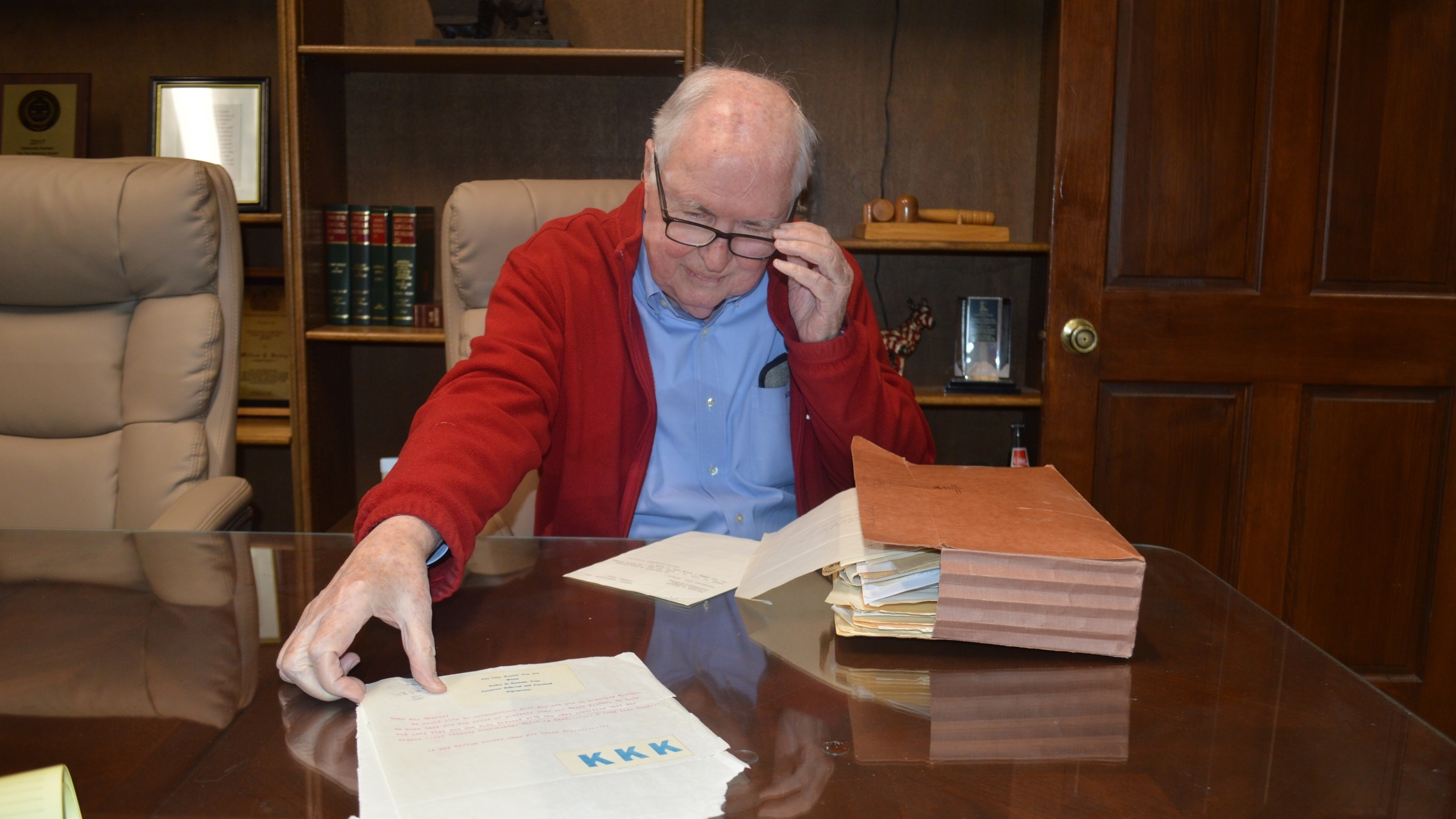 William Baxley, former Alabama Attorney General, with some of his files at his law offices. (LIZ RYAN/SPECIAL TO APR)

The 1970 Governor’s Race between George Wallace and Albert Brewer overshadowed every other political race in the state that year. However, one of Alabama’s legendary political figures burst on the scene in 1970, when Bill Baxley was elected Attorney General of Alabama. The Attorney General’s race was below the radar screen of the titanic war waged by Brewer and Wallace.

Bill Baxley’s victory was a major upset. Baxley was a 28-year-old district attorney from the Wiregrass. He beat a veteran Attorney General MacDonald Gallion in a close race.  Baxley became the youngest Attorney General in the nation when he was sworn in at the January Inauguration. He had just turned 29. His historic rise at such a young age made him fodder for national publications like Time Magazine, who featured him as one of the brightest rising stars in the nation. His brilliance gave new meaning to the word prodigy.

It was not immediately apparent to the voters of Alabama that they had elected a true progressive liberal as their Attorney General. They soon did when Baxley began aggressively attacking the Big Mules in Birmingham and throughout the state and consistently fought for the downtrodden in the state. He sued every Big Mule in sight, including U.S. Steel, for pollution and other environmental concerns during his 20-year career in state politics. Baxley never deviated or backed down from his progressive Democratic ideology, even when it might have been politically expedient to do so. He could not be bought. He was his own man and a true Alabama political statesman.

When Baxley won the 1970 Attorney General’s race over MacDonald Gallion, he openly and unashamedly courted liberals, labor and blacks to win the race. He did not do it for expediency, but because his heart was in it.  Baxley was a true progressive Southern Democrat. He openly courted, embraced and built an overt friendship with labor leaders and black leaders such as Joe Reed.

Baxley was certainly a contrast to our race-baiting Governor George Wallace. Ironically, Wallace loved Baxley. Deep down Wallace was a hardcore, progressive who had lived through the Depression. He cut his teeth as a New Deal Democrat. Baxley forged a political career with epic historical milestones in Alabama politics. He was elected Attorney General in 1970 and again in 1974. He ran second for Governor in 1978 when Fob James came out of the blue to upset the “Three B’s” – Bill Baxley, Albert Brewer, and Jere Beasley in the governor’s race.

Bill Baxley came back in 1982 and was elected Lt. Governor. He served closely with George Wallace, who was serving his fourth and final term as Governor. They had a special friendship and spoke on the phone constantly. I think Wallace admired Baxley for being true to his principles.  He also respected Baxley’s understanding of some of the golden rules of politics and that is “your word is your bond” and also “you dance with the ones who brung you.”

Bill Baxley was the Democratic nominee for governor in 1986. He was upset by Guy Hunt, who became the first Republican governor since Reconstruction that year. Bill Baxley left politics after that race and did what he really loved. He became one of the most prominent trial lawyers in Alabama. He loves the practice of law. He was born for it. For the last 36 years, he has been one of Alabama’s top lawyers and probably one of the most expensive. Baxley now resides in Birmingham and takes prominent cases all over the state.

Baxley was born and raised in Dothan. His daddy, Keener Baxley, was a well-respected Circuit Judge in Dothan. The Baxley’s were a prominent family and among the earliest settlers of Houston County. Young Bill Baxley grew up loving the law, politics and baseball. He grew up in his Daddy’s courtroom in Dothan and learned to love the law. There was never any doubt in his mind that he would be a lawyer by profession because he probably was not going to be a major league baseball player, which was every young boy’s dream at that time.

He was always brilliant, academically, and was gifted with a photographic memory. He skipped a grade in school and finished high school at age 15. He entered the University of Alabama at age 16. He graduated from college at age 19 and the University of Alabama Law School at age 22. After law school, he returned to Dothan to practice law.  He was elected District Attorney for Houston and Henry Counties at the ripe old age of 25. Three years later he was elected Attorney General of Alabama. The rest is history.