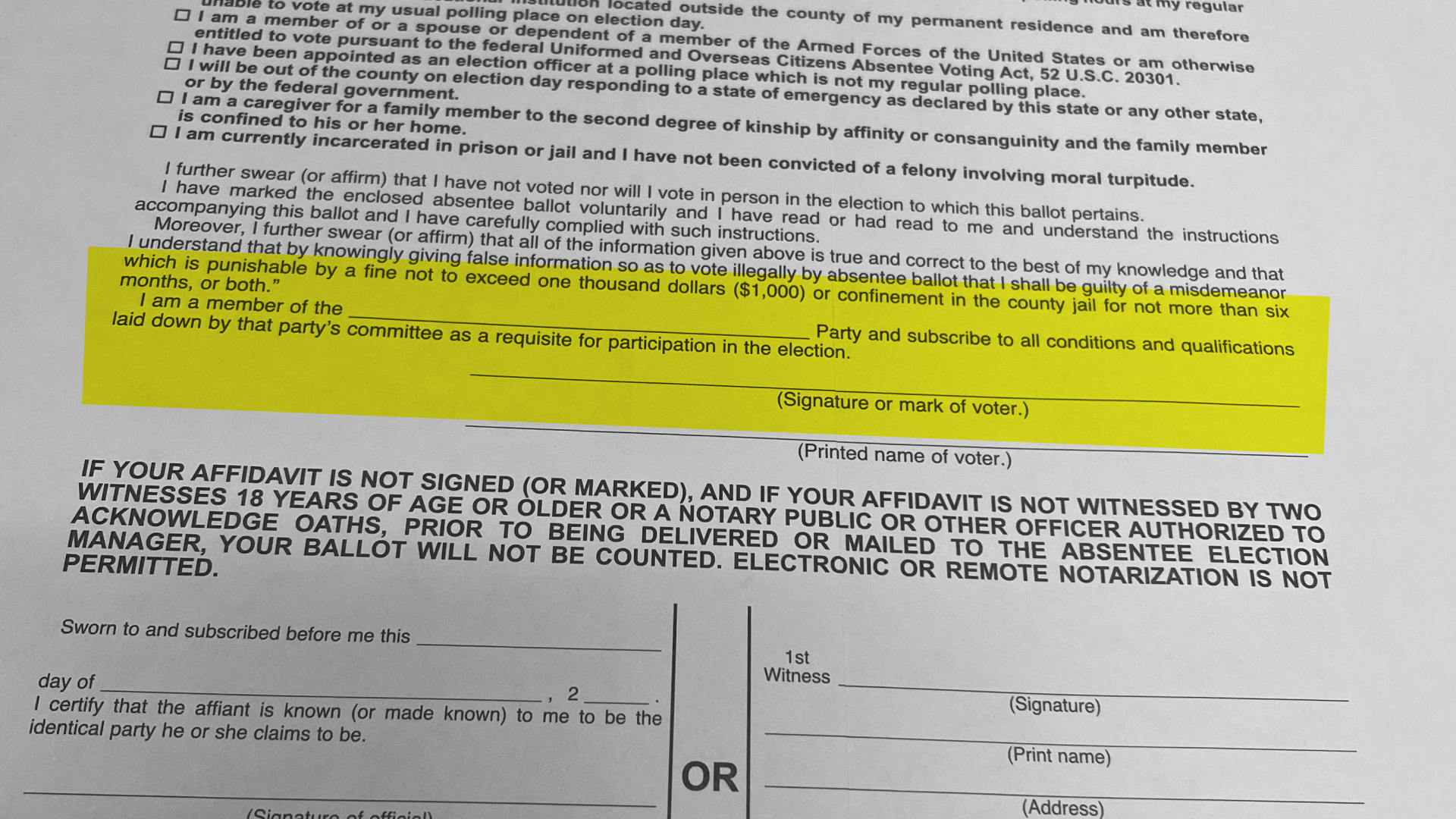 A curious byline related to party affiliation within the mandatory affidavit printed on each and every absentee ballot envelope sent to voters who choose to vote absentee in Alabama has raised many an untrained eyebrow in the wake of the recent midterm primaries.

When voting absentee in Alabama, prospective voters are required to fill out this affidavit before sealing their ballot inside the envelope and mailing or hand-delivering the package to the office of the Absentee Election Manager for their respective county.

The section in question lies just above the warning that if a voter fails to have the affidavit witnessed “by two witnesses 18 years of age” or notarized, it will be spoiled and not counted.

“I am a member of the [Name] Party and subscribe to all conditions and qualifications laid down by that party’s committee as a requisite for participation in the election,” the section reads.

Though somewhat innocuous at first glance, this section could and has led to an amount of confusion for would-be voters who question why they need to declare a party affiliation when voting absentee.

APR contacted the Alabama Secretary of State’s Office with regard to this party affiliation section in the affidavit and asked specifically if this section of the affidavit was used in the processing of votes during an election.

According to Clay Helms, director of elections for the Alabama Secretary of States Office, there are three components of the affidavit that are required to be completed for the ballot to be unspoiled: A voter’s signature, a witness signature or notary public signature, and the reasoning for voting absentee.

Party affiliation, though required to be on the affidavit envelope by Alabama code §17-11-8, is not one of the three components of the affidavit that, if left unfilled or incomplete, would result in that ballot’s disqualification, the office said.

Alabama Secretary of State John Merrill reiterated this point by stating that an individual could not be disqualified if they received a ballot that was inconsistent with the party they declared on the affidavit.

“If somebody had been a lifelong Democrat [and] they voted Republican, had a Republican ballot in there, and they wrote Democrat on that line, they wouldn’t be eliminated from having their ballot counted,” Merrill said.

The primary elections, which officially ended last week, continue to be a controversial area of debate due to the revelations of a small number of primary elections being contested due to out-of-district votes and narrow margins of victory.

In their decision, the party’s steering committee counted two defective absentee ballots for Whatley, alongside a single provisional ballot by a previously unregistered voter, and discovered approximately 90 votes from out-of-district voters in Russell County were allowed to be cast during the May 24 Primary; disproportionality favoring the incumbent, according to a source familiar with the primary contest hearing last Saturday.

The final results of that primary will be determined in a coin-toss, with Alabama Gov. Kay Ivey acting as a witness.