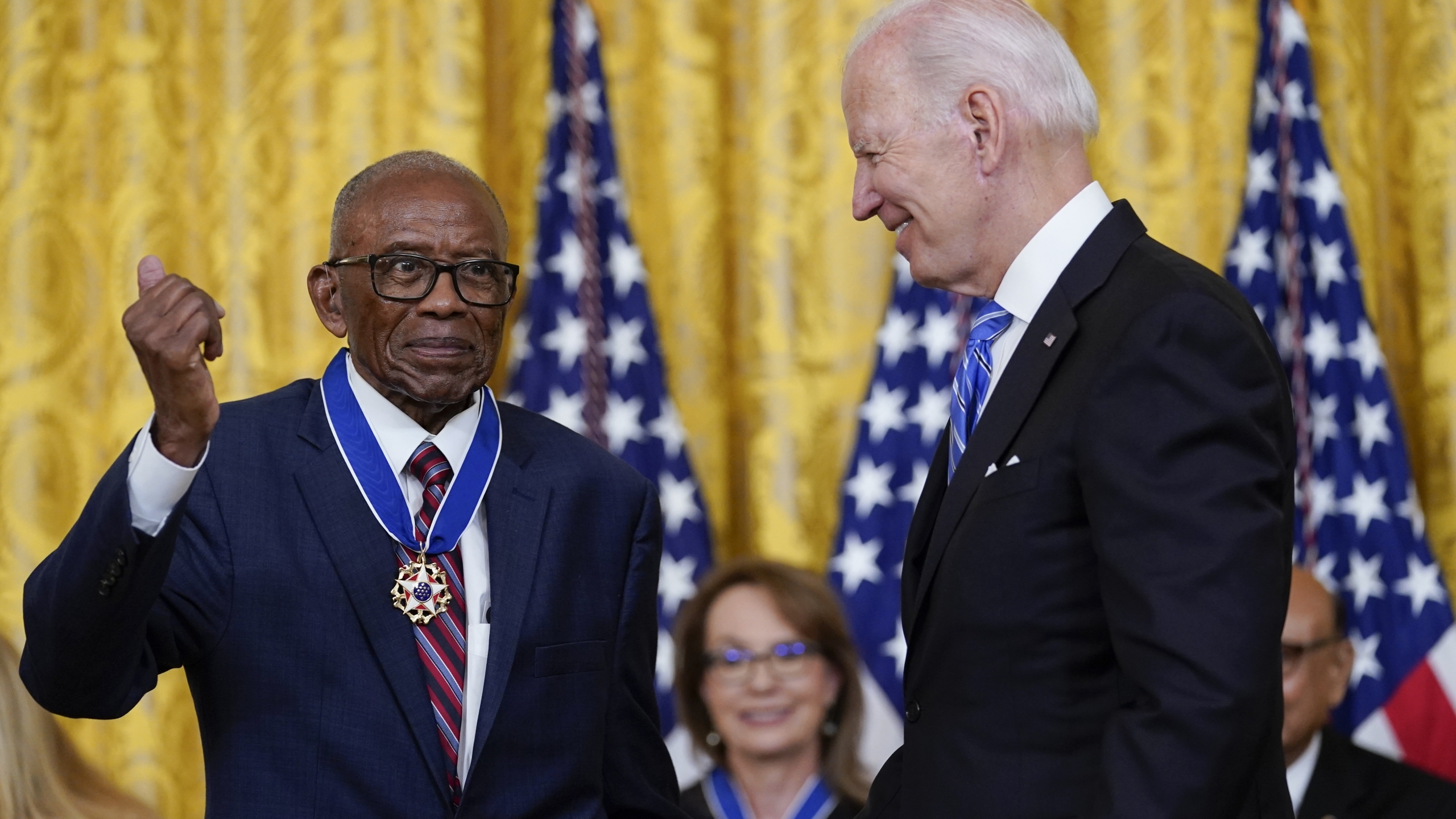 President Joe Biden awards the nation's highest civilian honor, the Presidential Medal of Freedom, to Fred Gray during a ceremony in the East Room of the White House in Washington, Thursday, July 7, 2022. (AP Photo/Susan Walsh)

Fred Gray finally got his medal.

At a ceremony at the White House on Thursday, the famous civil rights attorney from Tuskegee joined 16 others who received the Presidential Medal of Freedom from President Joe Biden.

“When Rosa Parks refused to move to the back of the bus, Fred Gray represented her at the front of the courtroom,” began Gray’s introduction during the medal ceremony. Gray stood alongside Biden, as a brief history of his accomplishments were listed.

“Fred’s legal brilliance and strategy desegregated schools and secured the right to vote,” Biden said. “He went on to be elected as one of the first African Americans elected to the Alabama legislature since Reconstruction. An ordained minister, he imbued a righteous calling that touched the soul of our nation.”

In a prepared statement, Gray, naturally, accepted the Medal of Freedom on behalf of his unnamed clients – the 623 men who were brutalized during the Tuskegee syphilis study, the unnamed marchers who went from Selma to Montgomery in 1965, the hundreds of people who participated in sit-ins, bus rides and other protests, students in desegregated schools and those who also decided to take on segregation and discrimination.

Gray was, for all intents and purposes, the lead attorney for the Civil Rights Movement.

His clients were some of the most recognizable figures in American history – Parks, Martin Luther King Jr., the NAACP, Vivian Malone, Ralph Abernathy, and a nearly unending list of plaintiffs in some of the most important and well known civil rights cases in history.

“Let me share with you what Congressman John Lewis, another Alabamian who received this award, told me in a conversation a few days before his death in 2020: I asked him, ‘Considering your long, superb civil rights record, what do you want me to do?” Gray wrote. “He said, ‘Brother, keep going, keep pushing and keep the record straight.’

“So, I say to all who are interested in civil rights: we must keep going, keep pushing, set the record straight and complete the task of eliminating racism and inequality. We must do it in a nonviolent manner, until justice rolls down like water and righteousness like a mighty stream.”

At 91, Gray still actively practices law and can be found most days in his Tuskegee law office.