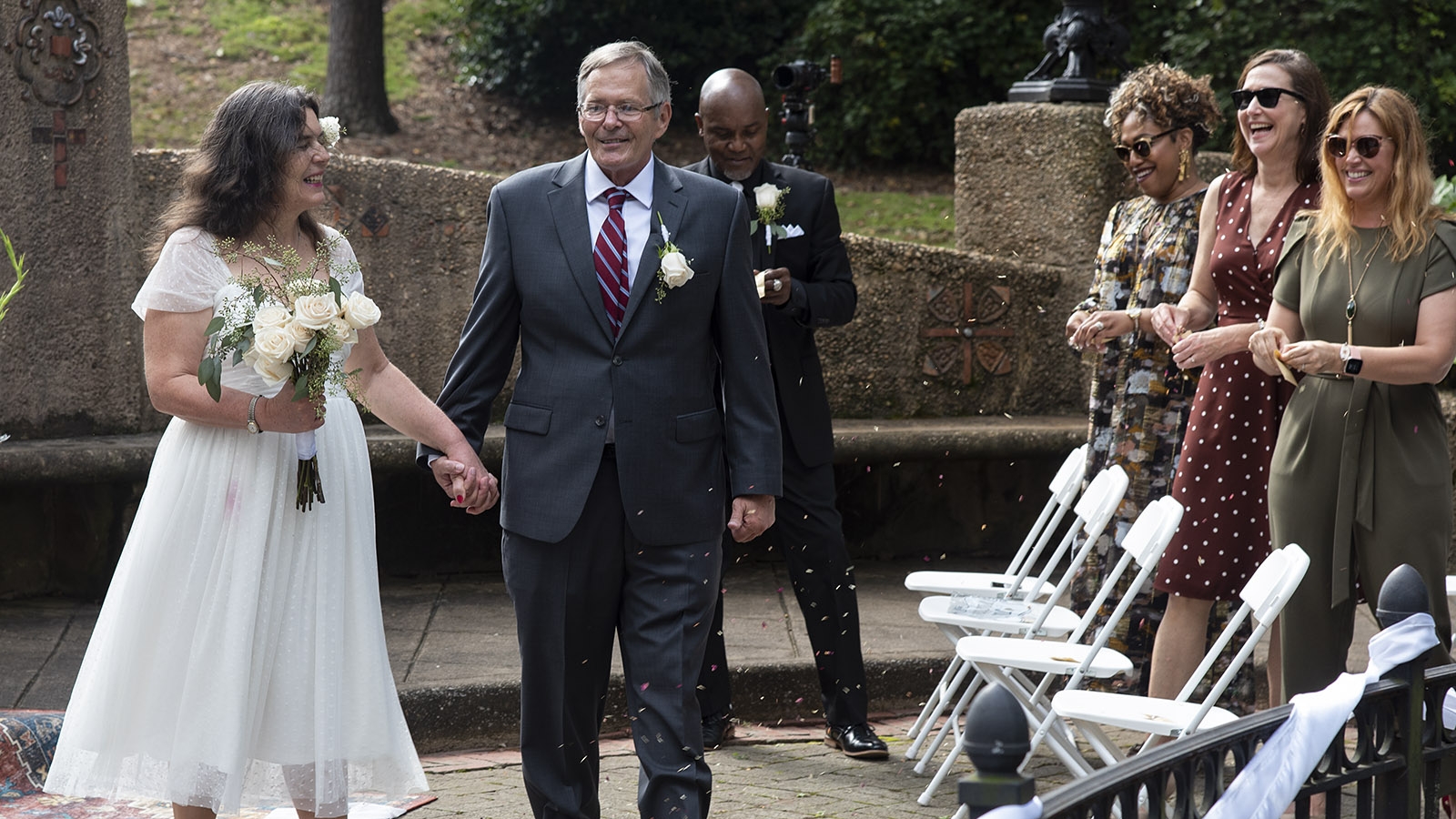 Michael Schumacher and Kathlyn Sprague get married at a ceremony provided by Alabama Appleseed on Oct. 12, 2021.

When Michael Schumacher married Kathlyn Sprague on Oct. 12, 2021, it felt like a dream.

Schumacher had met Sprague in 1993, eight years into his sentence of life without parole in Donaldson Correctional Facility, and even married her that year. But after four years with no progress appealing his sentence, the two went their separate ways, and Schumacher continued his lonely sentence for another 28 years.

Now his story has been put to film in the new documentary short “Love Without Parole” by Greg Womble and Elaine Witt, to premier at the Sidewalk Film Festival in Birmingham during the Alabama Spotlight Night, a 90-minute package of short films concluding with Schumacher’s story.

Elaine Witt, a journalist with decades of experience at newspapers including the Montgomery Advertiser and the Birmingham Post Herald, learned about the story through Alabama Appleseed, a nonprofit organization whose work includes advocating for incarcerated individuals facing lengthy sentences.

She brought in Greg Womble, who has taken to making documentaries alongside his work in marketing, to bring Schmuacher’s story to life in film.

“I’m a sucker for a love story,” Womble said. “I immediately was more drawn to this sort of crazy love story than I am to anything else, but the social justice message and the love story, I think they come together as a bit of a goulash.”

In the film, Schumacher describes the hopelessness of his time in prison, seeing “murderers and child molesters” walking free while he remained in jail with no chance of getting out.

He had been convicted under Alabama’s Habitual Felony Offender Act despite never being involved in a crime where anyone got hurt. Two of his offenses came when he was 17, and he was sentenced t life without parole when he was 24 years old after he stood watch during a robbery with a broken pool stick.

“I have always wanted to apologize for the (emotional) pain I caused (the victim) and her daughter, who happened to be in the store at the time of the robbery,” Schumacher said. “I can only pray that the survivors of this horrible crime have found some solace and inner healing of the pain and suffering inflicted on them so many years ago.”

Schumacher had never physically hurt anybody, but still faced the likelihood of never seeing the outside of the prison again.

In 1993, he began putting out letters in newspapers with the hopes that someone might respond and send him a letter.

Sprague said her mother convinced her she would be a good person to write Schumacher, and the two became pen pals. A few months later, she flew from New Jersey to visit him.

“I could see what a gentleman he was even in the circumstances he was under, there was just something special about him,” Sprague said.

For a few years, Sprague had the gusto to help Schumacher appeal and attempt to free him from prison to begin a life together.

But after three years of getting nowhere, Sprague said she realized it was a dead end, and she and Schumacher decided to get a divorce.

Schumacher wrote at the time that it put him in a “state of haze” and he soon after learned that he could no longer appeal his conviction.

So he continued serving out his life behind bars, until he saw an article where Alabama Appleseed had succeeded in releasing a man much like himself.

“The guy lived in the dorm next to me. We didn’t know each other, but I was sure happy for him,” Schumacher said. “They mentioned the lawyer’s name who represented him so I wrote it down. From what I gathered, his crime was just like mine. So I figured I would write the attorney a letter and see if she could give me any help or advice. I really didn’t think I would get a reply, but it was only a stamp and I had nothing better to do at the time.”

Things moved quickly and Schumacher was released from prison, allowing him to reenter a world that had greatly changed and paving the way for him to reconnect with Sprague.

The week of his release, Sprague said she and Shumacher were on the phone every day.

“And I don’t recall when we got all tangled up in love again,” Sprague said.

Witt and Womble were there for the wedding, put on by Appleseed, as Schumacher and Sprague finally began the marriage they had longed for so many years ago.

Womble said the very limited screenings of the film have garnered an emotional reaction.

“I’ve been changed by this thing. It makes me more grateful,” Womble said. “It makes me pay attention tot people and the simple things more and I hope it does that for more people.”

Witt said Schumacher’s story gives something to connect to for peole when they are thinking about parole.

“I worked out of the Montgomery Advertiser in the 1980s covering courts and all that time hearing about these draconian laws and the lives that are unnecessarily wasted, but this film just puts a beautfiul human face on that and a beautiful love story,” Witt said.

The trailer can be viewed here: trailer.

For more information and tickets to see the film at the Sidewalk Film Festival next Friday, click here.