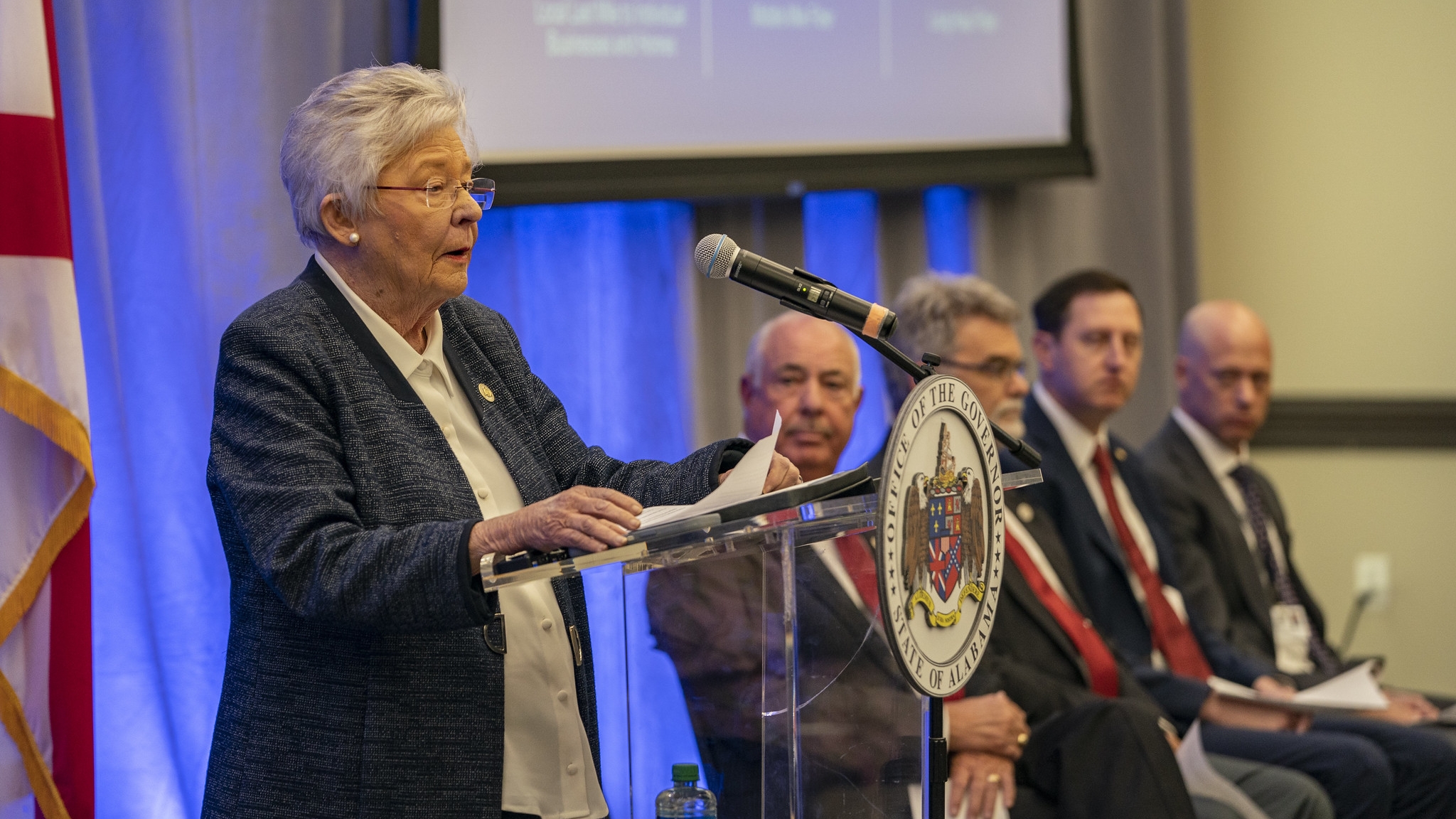 Gov. Kay Ivey speaks to guests gathered at Central Alabama Electric Cooperative outside of Prattville about the $82.45 million "middle mile program" to expand broadband in the state. Governor’s Office/Hal Yeager

Nearly 3,000 miles of existing and new fiber infrastructure will be connected over the next three years thanks to an $82.45 million grant announced by Gov. Kay Ivey and other state leaders Tuesday.

The grant is part of the $276 million commitment the Alabama Legislature made to broadband expansion out of the state’s ARPA funding.

Ivey and others announced the grant at Central Alabama Electric Cooperative near Prattville Tuesday, one of eight electric cooperatives that make up the Fiber Utility Network, which will be using the funds to make the fiber connections. The seven other co-ops are Coosa Valley, Covington, Cullman, Joe Wheeler, North Alabama, PowerSouth and Tombigbee.

“Achieving full broadband coverage is a journey, not a short trip, and today is an important step toward completing that journey. The Alabama Middle-Mile project – the infrastructure setting part of this journey – is going to lead our state to be the model for the nation when it comes to providing broadband capabilities,” Ivey said. “In 2022, being able to be connected at home, work or on the go is absolutely necessary, and this is certainly key to making that a reality.”

The Alabama Department of Economic and Community Affairs is administering the award through its Alabama Digital Expansion Division. The division was created by the Legislature and Governor Ivey to specifically target methods and means to supply broadband services to unserved and underserved areas of Alabama.

“The project is the springboard to supplying broadband services for rural residents, businesses, educational facilities and other community anchors,” said ADECA Director Kenneth Boswell. “I commend the Fiber Utility Network for their willingness to undertake this necessary step to ensure more Alabamians have access to these services.”

The “middle mile” will set up the infrastructure necessary to extend broadband out to the “last mile,” as the state gears up to bring high speed internet into every address in Alabama. Ivey said the middle mile program will impact some 300 Alabama towns.

Kim Evans, an elementary reading teacher from Greensboro, said the infrastructure is going to give rural students the resources necessary to be proficient.

“This is going to be huge for our babies,” Evans said.

Several key organizations have also played an important role in bringing this broadband infrastructure effort to the state. Officials said the Alabama Rural Broadband Coalition — which includes groups such as Alabama Power, the University of Alabama system, ALFA, Auburn University,  the Energy Institute of Alabama, economic healthcare organizations and many others — played a key role in focusing the priorities to make rural broadband expansion a reality.

Senate leaders joined Ivey in emphasizing the importance of making broadband available to everyone in the state.

“This is going to be a gamechanger,” said Senate minority leader Bobby Singleton. “Where I might wake up in the end zone and (Sen. Clay Scofield) may wake up on the 50-yard line, we’re about to wake up on that same 50-yard line.”

“This announcement is when we change our state for the better for generations to come,” said Scofield, who serves as chairman of the Alabama Digital Expansion Authority board. “This will really put us at the forefront of broadband in Alabama, and it will help us expand much quicker and at a more economical cost.”

Rep. Randall Shedd, co-chair of ADEA, agreed: “This project is probably the most significant step we’ve taken to get high-speed internet access to everyone in Alabama.”

About 13 percent of the state doesn’t currently have access to the FCC definition of broadband, and 19 percent falls short of minimum internet speed standards set by the state. The state’s goal is to supply broadband to every home and business in the state by 2032.