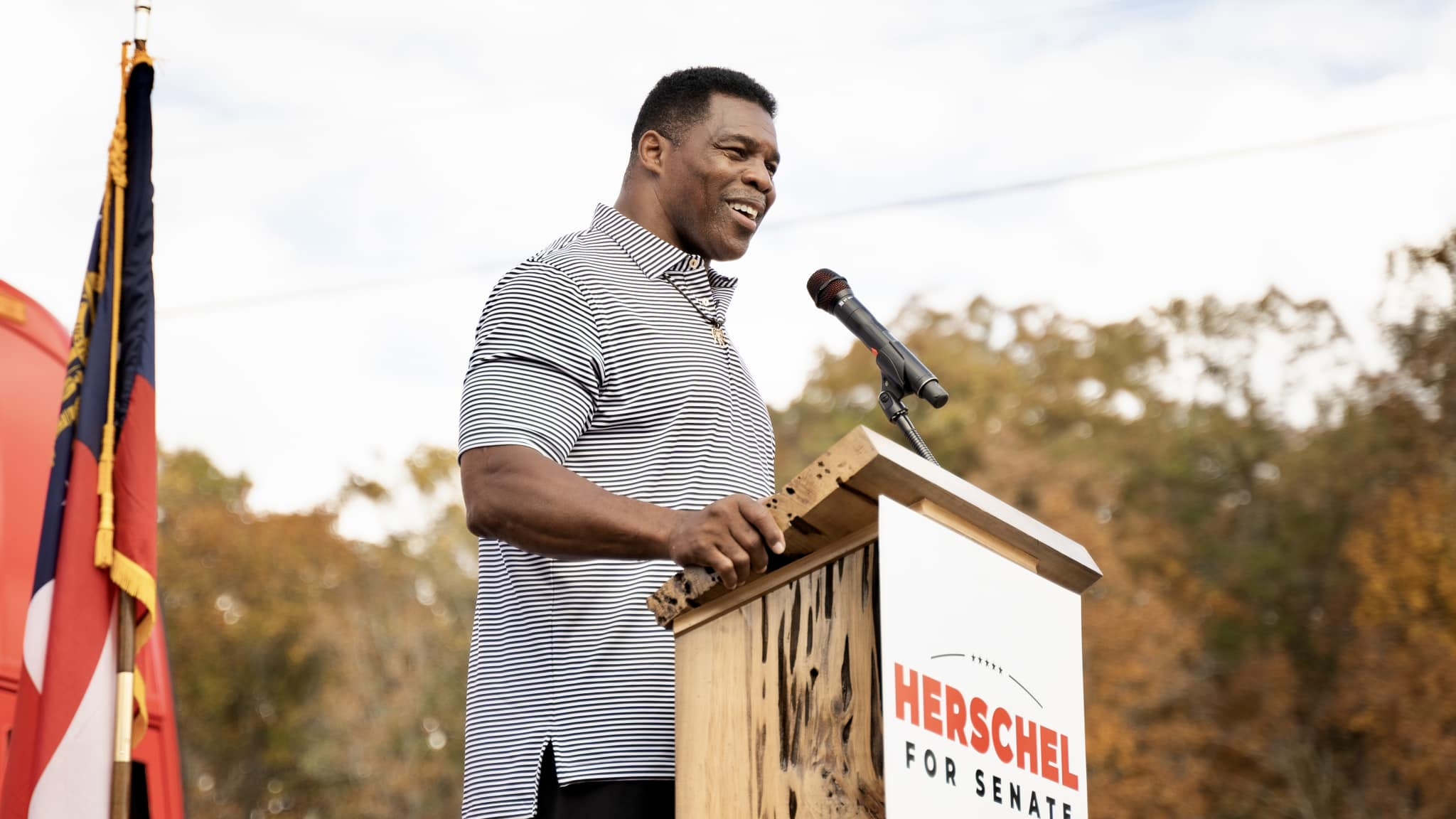 Think it’s inevitable? We may wake up Wednesday morning (or maybe a couple days later) to find that Georgia has elected Herschel Walker as a U.S. Senator.

Yes, it will be a tragedy if that happens, not only for Georgia, but for America.

Walker has shown himself to be morally blank, an outright liar (his main residence is in bat-guano crazy Texas), and, well, not especially that swift. Get beyond vampires and werewolves, and Walker stumbles around like somebody hit a few too many times in the head on a football field.

Or he may just be stupid.

I interviewed Walker when he was a star running back for Georgia as part of the old SEC Skywriters Tour. Sports journalists (that was me, then) flew from SEC city to SEC city over a week, and everybody wanted a part of Walker when we landed in Athens. But he was, let’s say, less impressive off the game field. No doubt, Walker was one of the best running backs in college football. But he’d be my last choice if I were captain of a Quiz Bowl team.

But don’t think he can’t possibly replace the intelligent, even-tempered incumbent, the Rev. Rafael Warnock, a Democrat who led to the Democratic sweep that snatched U.S. Senate control away from Republicans.

Of course, one might assume that Republicans would be giddy about a protestant minister heading off to Washington, with their “devotion” to “godly things” and “family values.” After all, Walker has reportedly financed the abortions of his former lovers. He was even disavowed by his son. But see, “family values” only matter to Republicans if you are in their families. And what’s this obsession with vampires and werewolves? It’s just another point we in the media can use to show this “world-class athlete” is little more than a back-county blunderbuss.

And why, your thinking brain asks, is Joey spending all this time on Georgia’s election.

Because if Warnock does win (and I think it won’t even be that close, but I’m terrible at predicting these things), it’ll be because Georgia has a powerful early voting system that gives more Georgians – Republicans and Democrats and independents – the opportunity to cast their ballots at times more convenient to them. More than 1 million Georgia residents voted early. Whether that benefits Walker or Warnock, well, the experts say, “who knows?”

I’m not an expert, but I think I know. Tens of thousands of voters have already cast ballots in early voting who did not vote in the General Election Nov. 8. My guess is that tens of thousands of agnostic Republicans did not suddenly feel the urge to get off their butts to vote for the “Vampire Slayer” (werewolves are stronger than vampires, claims Walker). More likely, they mosied on down to cast an early ballot AGAINST Walker (vampires, unite!).

We have no early voting in Alabama. Our two-term, lame-duck Secretary of State John Merrill doesn’t believe in it. Too expensive, he says, for what you get. I love it when politicians who can make a difference pull out the “too expensive” card. They never do it when discussing tax cuts for the rich or ripping reproductive rights away from women. They never do it when they want to build billion-dollar walls to keep people out, or when they deny life-saving medical care to fragile transgender children. It’s never too expensive to build new super-max prisons to inadequately warehouse humans, or the latest military tech that’ll cost taxpayers billions.

But it’s too expensive to let people vote early, so we’re left to juggle a Tuesday schedule that might not even allow us to vote at all.

To Republicans, that’s a win.

One terrible fact in Alabama is that we have an oppressive one-party system, and we cannot fault Republicans for that. The Alabama Democratic Party is so disorganized and inept it hardly puts up a fight. Democratic candidates are on their own in Alabama. The state Republican Party supports its candidates, and voters have enthusiastically responded, if, indeed, clueless.

In Georgia, they have potent voter-registration and get-out-the-vote campaigns. In Alabama, we have … U.S. Sen. Tommy Tuberville (R-Florida).

We elected a candidate for U.S. Senate much like Walker, the waning football legend. Tuberville was never a legend in coaching circles or anywhere, except in his own mind. Even so, we found out quickly he knows little about our how our Constitution and nation work. He even may have been involved, like former U.S. Rep. Mo Brooks, in the coup attempt on the U.S. Capitol Jan. 6, 2021.

We turned out U.S. Sen. Doug Jones, an intelligent, even-tempered incumbent, and, instead, elected a far-less qualified, failed football coach who lived in Florida. Only because he was a Republican. No other reason. A Republican.

Georgia’s trying to do the same. Please, let’s not make this déjà vu all over again.

Still, in Alabama, early voting is too expensive.

That’s just one more way the current secretary of state has helped make sure Republicans continue their dominance not by having better ideas, but by keeping as many nonRepublican voters away from the polls as possible.

After their disastrous midterms, some Republicans wanted to raise the voting age from 18 to 21. I say lower it from 18 to 16. Young people have led every successful progressive social justice campaign in this country, so Republicans don’t want them anywhere near a ballot box.

Republicans want to tell people what to do, when to do it, and where to do it. They already know they can’t win a nationwide election, and this midterm shows voters are tiring quickly of their idealess campaigns. The only way they can win is to change the rules, so they don’t have to have ideas. These include the brainless who support Donald Trump’s effort to suspend the U.S. Constitution.

Sure, some people tell me that John Merrill hasn’t been as bad a Republican secretary of state as some others. Or as he could have been. That’s supposed to be a comfort? “Not as bad” doesn’t mean “good.” It certainly doesn’t mean “great.”

It’s been a long time since Alabama had a true “everybody-vote” philosophy in the Secretary of State’s office.

And Merrill’s successor will be even worse, we’re told. That’s probably right, which again is an example of how far Alabama is behind the times.

Most states rejected their crazy, anti-voting, Republican-only candidates in the November election. Not Alabama. If you weren’t a Republican, you weren’t going to win. No matter how

Because where campaigning and organization are concerned, Democrats have nothing. Zero. Zilch. Nada.

Republicans have it all, and with the misinformed voters’ blessings, keep getting more.

You know, like Coach Tubby. We hope Georgia doesn’t go there. It’s a dark, scary dead-end alley. Filled with werewolves and vampires. And Republicans.