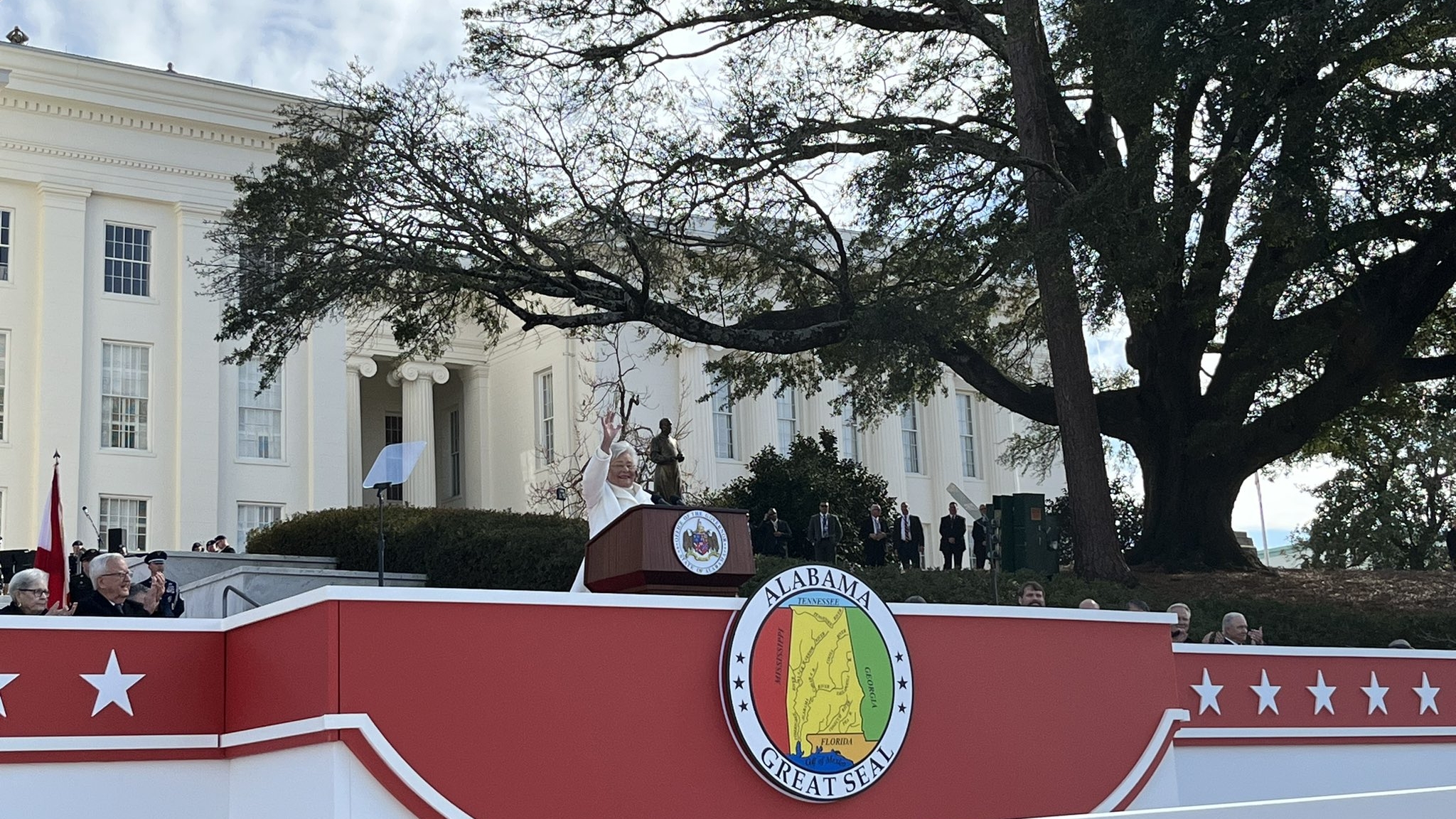 Gov. Kay Ivey during the inauguration ceremony on the Capitol steps in Montgomery. Governor's Office/Twitter

During her inauguration ceremony Monday, Gov. Kay Ivey said “Everyday issues” will be at the top of her agenda for her final term as governor, with education as her “number one focus.”

Ivey emphasized the importance of parental involvement and emphasized her support for expanding school choice, beginning with “reforms to our charter school options.”

Ivey pledged to have the state in the top 30 for education by the end of her tenure as governor. Alabama has consistently ranked near the bottom of education rankings.

“I pledge to you that we will no longer accept the existence of a failing elementary school,” Ivey said.

Ivey, 78, will begin her second full term as Alabama’s governor after also filling the unexpired term of Robert Bentley to begin her time as the state’s top leader.

In the inaugural address, Ivey criticized the Biden administration and said the state is working to dull the impacts of inflation.

“We don’t need to sugarcoat it,” Ivey said. “An unprecedented pandemic has led to the federal government spending way more money. This has resulted in rapid high inflation, which means higher costs everywhere that you turn.”

Ivey signaled a continued focus on road and bridge construction and repair as well as broadband expansion as the state looks to improve critical infrastructure.

Growing up as a young girl in Wilcox County, Ivey said she could have never imagined a world where Alabama was electing a female governor and female U.S. Senator, while also having to “fight for our girls to have a fair chance when competing in sports.”

The comment was Ivey’s only reference to the state’s recent slate of bills targeting transgender youth, but Attorney General Steve Marshall elaborated on the state’s current legal fight during his speech.

“I’m fighting the far left gender ideology of the Biden administration to defend our law prohibiting dangerous experimentation on our children,” Marshall said. “This is being challenged by the United States Department of Justice, and frankly, Merrick Garland needs to pack up and get out of here. These are some of the many victories that we celebrate. But we know that the war rages on across our nation to subvert our traditions and our values, those targets including our children, our schools, our families, our communities, and our governments.”

The challenge to the law has led to an injunction keeping the law from being enforced, as U.S. District Judge Liles Burke stated the plaintiffs are likely to win the case on the merits based on what he saw in a preliminary hearing last year.

Marshall compared himself and other attorneys general to the Roman Triarii as the last line of defense for the states.

“If we are to win this fight, and to preserve everything that Alabama holds so dear, we can’t sit back and rest on our defenses,” Marshall said. “We must have a united front line that’s advancing our cause, not just defending it.”