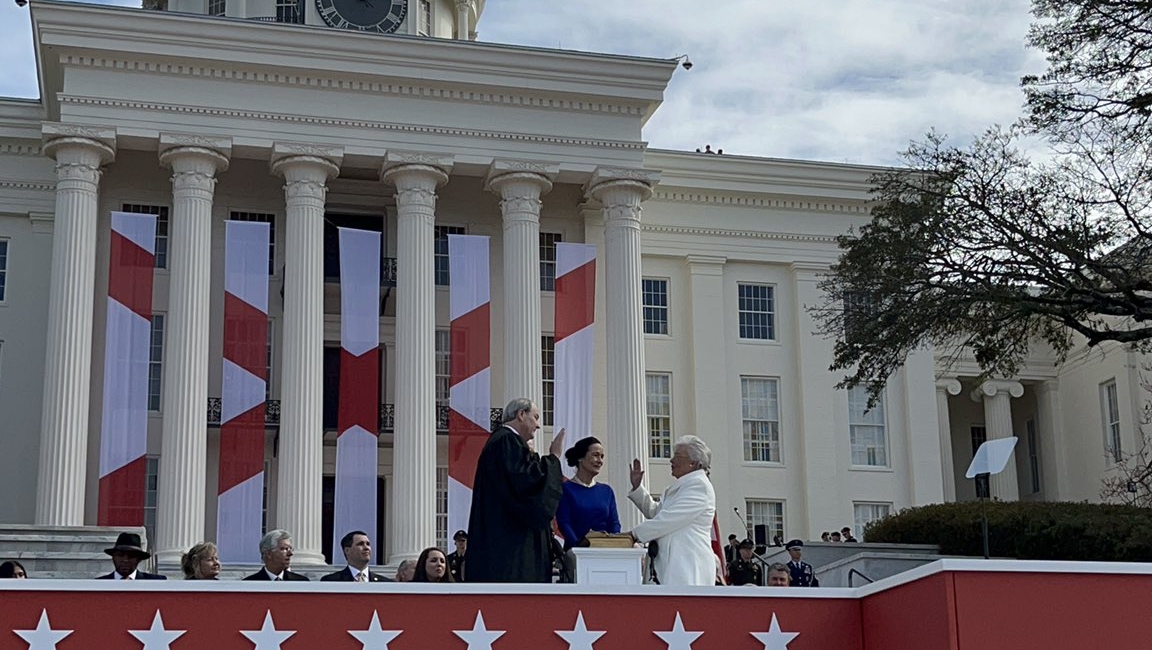 The Inauguration of our Alabama Constitutional officials was Monday. Our state constitution calls for the inauguration to be held on the third Monday in January.  As you would expect and as Almanac’s suggest, it is usually a cold day. Over the years I have had countless folks harken back to their high school band experiences of marching in the Inaugural Parade, especially ladies who had been majorettes.  They had to march and twirl a baton in 20 degree weather with skimpy, legless, bathing suit style attire.  It left them with a lasting indelible memory of an Alabama Gubernatorial Inauguration.

Mind you, I was not there, but every old timer who has talked politics with me over the years and who have seen a good many inaugurations, will remark that the January 1963 George Wallace initial inauguration as governor was the coldest.  There was a lot of frost bite that day.  However, the inaugural address from George C. Wallace was hot and heavy.  That was the day that Wallace threw down the gauntlet and declared “Segregation today, segregation tomorrow, and segregation forever.” That was exactly 60 years ago.

A lot has changed since that day.  It was during the Wallace era that the Civil Rights movement changed the political landscape of the nation and especially in the south. Wallace was an integral part of that historical era.  He watched it all unfold from his Goat Hill office overlooking Dexter Avenue and he was the reason for a lot of the bloodshed.  Every time I see an inauguration on the Capitol steps, I reminisce about the history that has been made in that block of Dexter Avenue in Montgomery.

The men who wrote Alabama’s overtly racist 1901 Constitution and the crowd that howled in defiance as Wallace made his 1963 declaration, would marvel at the change and diversity of today’s Alabama.  It is poetic and ironic that this year’s Inauguration Day, January 16, 2023, was on the same day as Martin Luther King Day, a state and national holiday.

Kay Ivey grew up in the heart of the Wallace Era in Wilcox County.  She cut her political teeth campaigning for the Wallaces.  She was especially involved with Lurleen Wallace’s 1966 governor’s race when she was a student at Auburn University.  After Auburn she worked for a while in Banking and teaching in Mobile.  She began her Montgomery career as the reading clerk in the Alabama House of Representatives under the tutelage of Speaker Joe McCorquodale.  Black Belters, like McCorquodale, controlled the House and the Senate.  Kay Ivey’s melodious, pronounced Black Belt accent drew folks’ attention to her reading even the most mundane legalese for hours on end.  She later became associated with the Alabama Commission on Higher Education.  As their Public Relations and Governmental Affairs Director, she learned the legislative process.  She entered the political arena in 2002, when she was elected State Treasurer.  She served eight years in that post.  She was then elected Lt. Governor in 2010 and reelected in 2014.  In the middle of her second term, she became Governor after Dr. Robert Bentley vacated the governor’s office.  She served out the last 18 months of his term and was elected in her own right as Governor of Alabama in 2018.  She was reelected, overwhelmingly, last year.  If Kay Ivey finishes out this four year term she will have been Governor of Alabama longer than anyone else besides George C. Wallace.  She is the first woman to be elected as a Republican.  She is the second female governor, the first being her idol, Lurleen Wallace, 56 years ago.

Jeremy Oden and Chip Becker were sworn in for four-year terms on the Public Service Commission.

It was a big day in Alabama politics.