Over 130 tea party activists and candidates filled the meeting room at Hoover Tactical Firearms Thursday night to celebrate their success and make plans for the 2012 election.

Zan Green who is the founder and the President of the Rainy Day Patriots said that their first rally three years ago was in a thunderstorm and only 20 people showed up.  President Green said that over 10,000 people attended their second rally.  Ms. Green told the crowd, “the tea party is not dead and it is not going anywhere.” RDP President Green said, “It is an American heritage.” The Tea Party was founded by those patriots that dressed up as Indians (the Boston Tea Party) and “We are not going anywhere.”

Birmingham area talk radio host Matt Murphy said, “The death of the tea party has been greatly exaggerated.”  “I meet people every day who have given up hope in America.”  Murphy said that the liberal media wants Americans to give up hope. “The opposition is not just the socialists and the liberals it is the media too.”  Murphy said that it always frustrated him how the liberals always seemed more unified than the conservatives and libertarians.  Matt Murphy said, “Our purpose is unified by one thing….the Constitution of the United States.”  “Whatever your issue it is it has its basis in the Constitution.”  “The liberal media has tried to use the primary process to fracture the conservative movement.”  Murphy urged that all the conservative and libertarians faction need to come together to vote out Barack Obama in November.  Mr. Murphy hosts a radio show on 100.5 FM in Birmingham weekdays between 6:00 am and 10:00 am.

The featured speaker of the night was Michael Patrick Leahy, a conservative author and cofounder of the Tea Party Movement.  Mr. Leahy told the conservative audience “We are going to win.” “Don’t listen to the naysayers.”  Mr. Leahy said that he started Top Conservative On Twitter (TCOT) “in the dark days of November 2008.” “Very quickly I understood that there were many Americans who did not like the direction we are going.  Leahy said that conservatives have to spend every one of the next 230 days to get out the vote. Leahy said, “They (liberals) are trying to create a collectivist yoke to impose on us.”  “Tonight all over the country tea parties are meeting, and they are focused on getting out the vote.”  “The good guys are going to win.”

Conservative talk radio host Gina Gentry Loudon, “Dr. Gina,” said, “One of the things that happened is that I started to notice as the tea party got off the ground was the fracturing.”  Dr. Gina said that she supported Rick Santorum for President, other people in the room support Mitt Romney, Newt Gingrich, Ron Paul, and some want a brokered convention electing to go to someone else like Sara Palin.  Dr. Gina said “All our differences make us strong.” “This is our moment.” “We all stand for one thing reclaiming our Republic for the Constitution.”  Gina Gentry Loudon’s radio show is on 101.1 FM weekdays between 4:00 pm and 7:00 pm.

Talk radio show host Lee Davis also spoke to the gathered crowd.  Mr. Davis said, “Talk radio has been driven by the Tea Party movement. “ “A lot of people are watching desperate housewives.  A lot of people are watching Project Runway.  A lot of people are keeping up with the Kardashian girls.”  “Yes we disagree on things.  Let don’t emphasize what divides us.”  “What unites us is the U.S. Constitution.”  Davis quoted Ann Coulter ‘We have a stupid party (Republican) and the Evil Party (Democrat).  We can make the stupid party smart but we can’t make the evil party good.’ Davis concluded, “Remember the main thing is sending Barack Obama back to Chicago, back to Hawaii, back to Kenya, or back to where ever he wants to go,” Lee Davis said.  Lee Davis hosts a talk radio show on 101.1 FM weekdays from 11:00 am to 1:00 pm.

Peyton Zarzour is the owner and operator of Hoover Tactical Firearms.  He said that he is a very strong supporter of our 2nd amendment rights.  He spent 32.5 years in law enforcement and moved to the new store (a former Food World) on Hwy 31 in November.   The future of our 2nd amendment rights is unclear.  “EPA and OSHA is doing everything to keep the small man down.” “I don’t know that much about candidates, but I do know judges.  The only judges I back are law and order judges.”  Mr. Zarzour said that the state should put the criminals in jail that do the gun crimes.  Zarzour said we need to change the laws where “a gun crime is not 2 years, not 3 years, not 5 years, but maybe 30 years”.  Mr. Zarzour’s new facility sells tactical weapons, handguns, and combat knives and accessories.  It also has a deli, a target range, and meeting rooms for birthday parties and other events. “Our facility is a family oriented facility.”  Mr. Zarzour said that it is important for children and adults to know how to properly handle and use firearms to avoid accidents.

Hoover Tactical Firearms will be the new home of Rainy Day Patriots meetings.  The next meeting is the 6th district congressional debate next week on March 1 at 7:00 pm.

To learn more about the Rainy Day Patriots

The Alabama Sheriffs Association opposes both bills, arguing they put law enforcement and the public at greater risk from gun violence. 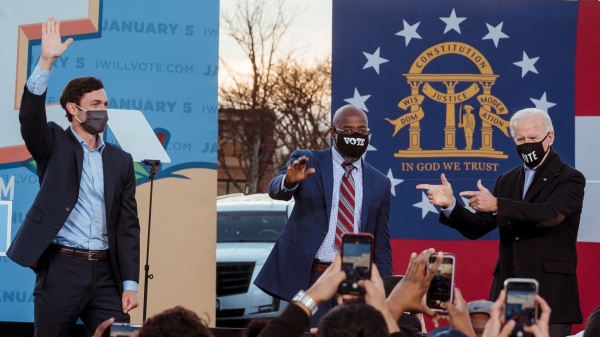 Alabama Sens. Richard Shelby and Tommy Tuberville now find themselves in the minority.