MONTGOMERY–The Alabama Senate has passed SB571 which will help the Teachers’ Insurance Fund save hundreds of millions in prescription drug costs.

Senate President Pro Tem Del Marsh said, “I’m pleased that we were able to catch this discrepancy in the law while we were in session, this situation is one that could easily have bankrupted PEEHIP or forced teachers to pay unbearable premiums.  Thanks to Senator Pittman for bringing this bill, the teachers’ insurance board will now be able to continue negotiating reasonable rates and providing affordable coverage to our teachers.”

The bill was sponsored by Sen. Trip Pittman (R) from Montrose.  Sen. Pittman said, “This bill will help the state avoid costly and prolonged litigation to resolve an issue we can very easily resolve through legislation.”

Sen. Marsh’s statement said that without this clarification of the law, PEEHIP could possibly be sued and could perhaps cost the state “at least $200-$300 million annually for prescription drug costs.”  Sen. Marsh said that if PEEHIP were forced to pay the full retail price for medications it would have led to increases in premium for members by as much as $100 to $200 a month.

PEEHIP was established in 1983.  It provides health insurance benefits for both active and retired Alabama education employees.  PEEHIP is run by the Retirement Systems of Alabama (RSA).  PEEHIP stands for Public Education Employees Health Insurance Plan.  Employees pay a modest premium that is deducted from their pay checks. Filling prescriptions for drugs that are covered in the PEEHIP formulary usually require a $6 copayment.

All law enforcement agencies would be required to share information about all of their officers.

The bill authorizes the secretary of state's office to audit the 2022 election results of three Alabama counties. 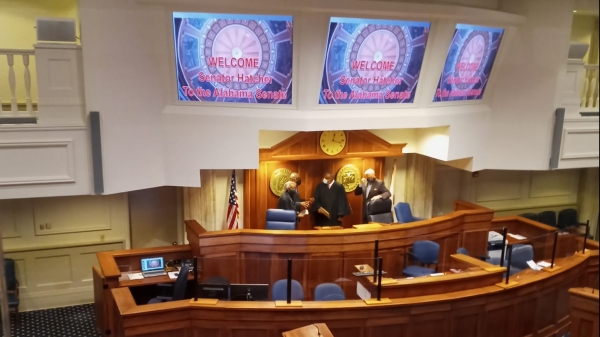 Hatcher was sworn in to represent District 26 in the Alabama State Senate.

The appointment of investigators by a DA would not be subject to a county personnel system.