Alabama Republican leaders were quick to announce the party’s support for Governor Romney following the second Presidential debate at the University of Hofstra on Tuesday.

Chairman Armistead said in a written statement, “Once again, President Obama failed to offer a plan to get America’s economy back on the right track and instead continued to blame past presidents and Congress for his failure. The truth is that after four years of Obama’s economic policies our economy remains stalled and Americans are still struggling to find work and pay their bills. It’s time for a change and Romney clearly made the case tonight that he has the experience and the plan to turn things around. His five point plan includes pursuing energy independence, training American workers, enforcing fair trade policy, cutting the deficit and championing small businesses  and these policies will create the jobs Americans so desperately need. Governor Romney showed what American leadership will look like in a Romney Administration, where he will not be afraid to call terrorism what it is, evil. President Obama and his administration have failed in leading our country on the economic front and foreign policy front.”

During the debate the Speaker of the Alabama House, Mike Hubbard (R) from Auburn said on Facebook, “Big Bird, again? Does the President truly believe we care more about budget cuts to Big Bird than we do about budget cuts to our men and women in uniform?”  Hubbard also posted, “There are 3.5 million more women living in poverty today than the day President Obama took office,” and “Kicking things off with a young voter. Good. 1/2 of them are unemployed or underemployed under Obama. His policies hurt them more than anyone. Romney = more jobs for those kids. Period.”

State Representative Phil Williams (R) from Huntsville said on Facebook, “I have enjoyed the debates. I think we all see what we want to see but the fact remains:   Our country is in deep financial trouble. The debt has been called the “greatest threat to our security”.  Forgetting for a moment all I heard tonight, I get back to the fact that government spending at all levels is unsustainable.  We simply can not risk a second term of this President and his policies that will further cheapen the dollar and incur greater than $20 trillion in debt.  We need a grassroots movement that will put our children before our own wishes for government that is just way too over-extended.”

On Facebook, the Alabama Republican Party posted, “CNN viewers give Romney the W on deficit, taxes, health care, and economy. The fact is, Obama didn’t offer any vision or plan for how he would improve the economy in the 2nd term. And the only thing he was crystal clear about tonight? He is very excited about raising taxes.”

The Political Director of the Alabama Federation of College Democrats Cody Jones declared the debate a stalemate on Facebook: “Post-debate analysis: I was glad to see a bit more sparring. The debate agreement made it appear as the two would avoid hard-hitting confrontation. These have been some of the more dynamic debates. Overall I really think this was a stalemate. Which strategically is a net gain for Obama.  Romney needed the win more than he did. I also expect the media coverage to be an, ‘Obama found himself’ theme. On substance there were a few critical points. Romney’s appeal to women voters was weak, just having a few on his staff. Also, look for Obama’s stance on gun control to hurt him in Virginia, Nevada, and even Colorado. Obama did seem to finally provide a strong argument for his support of traditional energy while Romney answered the Bush-era Republican policy question as well as he possibly could. This election will go down to the wire.”

Chairman Armistead said,  ”President Obama had the audacity to say in the debate tonight that he called the attack on our Libyan embassy and the murder of U. S. Ambassador Chris Stevens terror the day after the attack.  In reality, the Obama administration sent U.N. Ambassador Susan Rice on four Sunday TV news shows saying that the Administration had no evidence that it was a terror attack and blamed it on a YouTube video. The situation would be comical if it were not such a serious matter of national security. President Obama continues to put his head in the sand on the issue and that was on display tonight. It is time for new leadership in the White House! We look forward to not only delivering Alabama’s electoral votes to Governor Romney in November, but we are also proud to be sending Alabama Patriots to battleground states such as Florida and Ohio to help ensure Romney/Ryan victories there as well.” 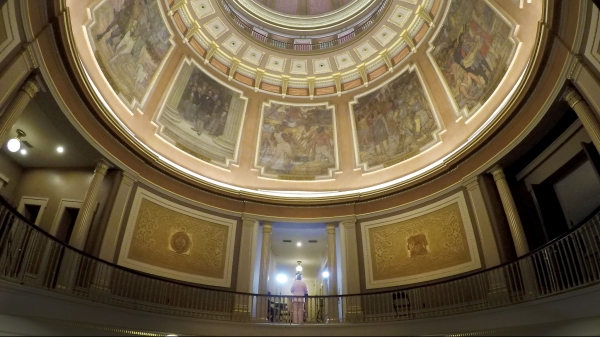 The 400-member ALGOP Executive Committee will elect a new chair on Feb. 27 in Montgomery.