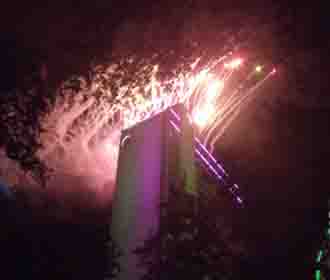 Mobile is the party capital of Alabama and they proved that with a mammoth New Year’s Day Celebration that Monday Night in the streets of Mobile.  The “Alabama Political Reporter” was on hand to report on the festivities. The Commodores were on the stage performing their many career hits.  The giant Moon Pie dropped from the 34 story RSA Bank Trust Skyrise Tower at midnight.  A laser light show illuminated the night sky, fireworks erupted in the night sky.  Everyone was having a good time.  ‘The Alabama Political Reporter’ was photographing the fireworks, then suddenly everything changed as at least three gun shots (by my count) opened up somewhere in the crowd gathered near the Main Stage at St. Joseph and St. Francis Streets to hear the Commodores and watch the MoonPie drop and fireworks.

I threw my companion to the ground and dove to the ground myself, while most of the gathered crowd in the local vicinity ran for their lives.  Dozens of Mobile Police officers rapidly rushed to the scene en masse on foot and on horseback.  I saw one man down with police and shortly thereafter paramedics providing emergency first aid.

‘The Alabama Political Reporter’ asked the police at the scene for more information on what had happened and if the victim was likely to live.  Understandably, under the circumstances, they declined our request for information.  The victim eventually left the scene in an ambulance.   Al.com is reporting as of press time that the gunshot wound is non-life threatening.

Afterwards some of the spectators in Downtown Mobile were visibly shaken and some were openly weeping.  Most of the tens of thousands of spectators were unaware than anything had happened.

This year the free events were all outside.

Mobile Mayor Sam Jones said prior to the event, “We looked at several locations and wanted to bring the Moon Pie Drop and stage location closer together to build more enthusiasm.  The combination of the great entertainment, the uniqueness of the Moon Pie Drop, and an anticipated large crowd have the makings of one amazing evening.”

The Alabama Political Reporter was on hand for all of the evening’s festivities.

Mobile also had three stages with diverse performers.  The Mardi Gras Park Stage at the corner of Government and Royal Streets featured the Perfect Image Show & Band, Elmo & the Bluesmen, and Grayson Capps. The Bienville Square Stage had live entertainment featuring Hotwire. The Main Stage at St. Joseph and St. Francis Streets featured the Wet Willie Band and the Commodores.  There was also a fireworks and laser light show.

The Mobile New Year’s eve event is considered to be the largest New Year’s Eve event in the country in the Central Time Zone.