Lord, I know you look after the little ones. And, I know Your Word tells us to have the faith of a tiny mustard seed. But sometimes it’s so hard. Those kids and teachers in Connecticut didn’t deserve the terror that Satan sent to their school that Friday morning. Lord, why do things like that have to happen? That was an elementary school. I know they were all afraid.

Lord, I know they’re with you now. Hold them close. They all need a hug. Lord, their parents and family really need you too. (We all need you).

Lord, you know I’ve spent the majority of my life associated with Law Enforcement. And, Lord, I can say without question, that every man and woman I’ve ever served with would have given everything to have been standing inside that elementary school when Satan burst in. What an honor that battle would have been. But, that wasn’t to be. Lord, that morning an unimaginable evil was released on the unprepared and the innocent. But, Lord, you know that is the world we now live in. And, from both sides of the social and economic tracks, evil is targeting those unprepared and innocent.

Lord, the evil that walked into Sandy Hook Elementary School is an evil most people don’t believe can come to their neighborhood. Some people really don’t believe Satan is real.

Lord, you know the number of times I’ve turned to you in anger and frustration. Those times when it seemed Satan’s evil was always one step ahead. You’ve heard my prayers.  Lord, I continue to pray for your guidance, protection, grace, and mercy. Not just for me, but for our nation.

Lord, throughout the years you have shown me the importance of staying in Your Word.  How Your Word strengthens the areas in my life Satan loves to target. At the right time Your Spirit has often lead me to the words and the message I needed. Lord, as a Law Enforcement Officer, I thank you especially for the story of Peter and Cornelius.

Acts 10:1-2 At Caesarea there was a man named Cornelius, a centurion of what was known as the Italian Cohort, (2) a devout man who feared God with all his household, gave alms generously to the people, and prayed continually to God.

Lord, throughout my years in Law Enforcement I’ve often thought of Cornelius.  Thank you for the encouragement of his story. Lord, you chose a Roman soldier, a Law Enforcement Officer, as the first gentile to be baptized. Wow, you really do want Godly men and women on your front lines fighting the evil one.  Lord, on behalf of the godly men and women I’ve served with, we thank you for Blessing us with the opportunity to serve you.

But, Lord, lately it seems like our numbers are few, and evil is everywhere. There are shootings, and killings, almost every day. Lord, Satan has been successful in blinding the unbeliever, and some believers, with his smoke-screen of violence, fear, and in-your-face arrogance. (You know a lot of your people appear reluctant to step out and confront arrogance.) I will continue to pray this is temporary meekness, and not weakness.

Lord, Satan continues to use race, sex, poverty, and even success, to turn us against one another. He has purchased professional politicians with success, and they have repaid him by taking Your Word out of our schools. He has also used knowledge You gave us to create a line of feel-good television preachers who should once again be run out of the temple.

Mark 5:9-13 Then Jesus asked him, “What is your name?” “My name is Legion,” he replied, “for we are many.” (10) And he begged Jesus again and again not to send them out of the area. (11) A large herd of pigs was feeding on the nearby hillside. (12) The demons begged Jesus, “Send us among the pigs; allow us to go into them.” (13) He gave them permission, and the evil spirits came out and went into the pigs. The herd, about two thousand in number, rushed down the steep bank into the lake and were drowned. 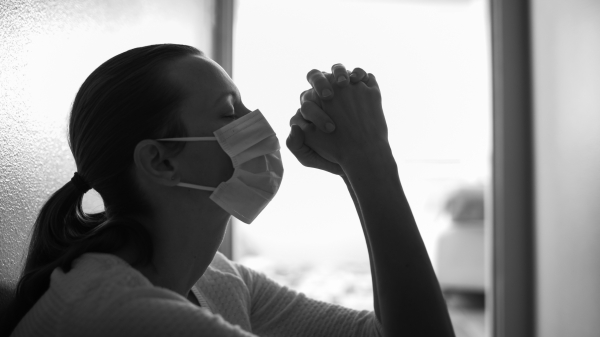 Opinion | God sends us help; some of us mistakenly turn it away

What is striking, however, is how many people of deep faith refuse to wear masks or take the available vaccines for COVID.

Controversy over administration’s prayers for divine intervention in coronavirus crisis

Whether or not the president and vice president should be praying out loud during the COVID-19 coronavirus crisis has become a partisan issue. After...