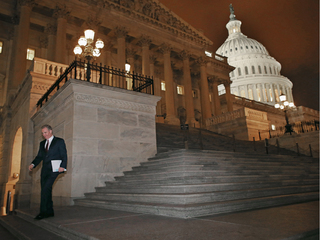 The Senate overwhelmingly passed a fiscal cliff deal 89 to 8 on Monday night that was crafted by Vice President Jo Biden (D) and Senate Majority Leader Mitch McConnell (R) from Kentucky. Alabama Senator Richard Shelby (R) voted “no” while Sen. Jeff Sessions voted for the measure. The U.S. House of Representative passed the Senate measure on Tuesday night by a margin of 257 to 167.

The deal addresses the fiscal cliff crisis which threatens to raise taxes on almost all American workers. The agreement would negatively impact far fewer Americans than the package of automatic sequestration cuts and mammoth tax hikes which went into effect at Midnight.

Under the terms of the deal, most Americans would pay the same income tax than that they did in 2012. Americans who make more than $400,000 would see their tax rate jump from a 2012 rate of 35% to a new rate of 39.6%. For joint return filers that threshold would be $450,000.Wealthy households are already seeing a tax increase of 3.5% on their investment earnings due to a new tax that went into effect in 2013 as part of Obamacare.  Individuals making more than $250,000 a year and households making more than $300,000 will see their ability to itemize deductions limited. The deal would protect existing tax credits for having children and sending a family member to college.

The deal would restore the current estate tax threshold of $five million; but Americans with estates larger than that would see the government seize 40% of their assets upon their deaths instead of the 2012 rate of 35%.

The McConnell – Biden plan simply postponed sequestration for a new crisis in sixty days that will include raising the debt limit. Essentially this plan kicks that crisis and the raising the debt ceiling crisis down the road just a matter of weeks. To the disgust of fiscal conservatives there were no significant spending cuts or entitlement reforms in this package.

Congresswoman Martha Roby (R) from Montgomery said of Facebook, “Today many of us expressed disappointment with the plan passed by the Senate.  What’s wrong with the Senate/Biden plan?  It doesn’t cut spending.  In fact, it adds more to the deficit. Really.”

Rep. Mo Brooks (R) from Huntsville said on Tuesday, “I will vote no on the Senate’s Fiscal Cliff Bill. The bill increases America’s deficit by $330 billion in what’s left of Fiscal Year 2012-13, and by $353 billion in FY 2013-14. I also cannot, in good conscience, condone with my vote a flawed process that denies the American people an opportunity to participate in their Republic on issues of this magnitude.”

Without a fiscal cliff deal every income tax bracket would have paid more taxes in 2013 than they did in 2012 and many more Americans will pay income taxes.  Drops in several tax credits would have affected almost everyone including low wage earners.

Congress also passed a one year extension of the current farm bill on Monday.
President Barack H. Obama (D) said he will sign the legislation into law on Wednesday.  President Obama said,

“A central promise of my campaign for president was to change the tax code that was too skewed towards the wealthy at the expense of working middle-class Americans. Tonight we’ve done that. Thanks to the votes of Democrats and Republicans in Congress, I will sign a law that raises taxes on the wealthiest 2 percent of Americans while preventing a middle-class tax hike that could have sent the economy back into recession and obviously had a severe impact on families all across America.  I want to thank all the leaders of the House and Senate. In particular, I want to thank the work that was done by my extraordinary Vice President Joe Biden, as well as Leader Harry Reid, Speaker Boehner, Nancy Pelosi and Mitch McConnell. Everybody worked very hard on this and I appreciate it. And, Joe, once again, I want to thank you for your great work.”

According to President Obama the bill will raise taxes by $620 billion.

Brooks said Thursday that both his opponents "will go negative" ahead of the Republican primary.

The congressman’s campaign detailed the incident in an email to supporters on Wednesday.