While America did not go over the fiscal cliff and most of the Bush tax cuts were retained in the Biden/McConnell deal which was supported by House Speaker John Boehner (R) from Ohio the bipartisan plan did very little to address the longterm issues of the budget. Fiscal conservatives and budget hawks were openly disappointed by the plan.

U.S. Representative Martha Roby (R) from Montgomery said on Facebook, “For months I have been hopeful Congress could agree on a reasonable plan to reduce the deficit and finally begin to address our national debt. I have repeatedly stressed that a truly balanced plan must include cuts to mandatory government spending. Unfortunately, the deal forged by the Senate and the Vice President does not contain real spending cuts, and I cannot support it.”

Rep. Roby voted against the plan in the House.

Senator Richard Shelby (R) from Alabama said, “‘I do not support this agreement. Our economy needs spending restraint by the federal government and fundamental tax reform that eliminates corporate welfare and lowers individuals’ rates. Instead, this package raises taxes, increases spending, and will lead to more borrowing. This deal is certainly no cure-all; rather, it falls far short of the measures necessary to promote job creation, economic growth, and fiscal stability.”  Shelby was one of just five Republican Senators who voted against the agreement.”

U.S. Representative Mo Brooks (R) from Huntsville who voted against the package in the House said in a written statement, “This extraordinarily complex legislation dramatically impacts taxes, revenue, the economy, our debt, health care, and a myriad of other issues.  It is wrong to rush monumental legislation through Congress in a way that denies the American people an opportunity to review, understand, and share their insight with Congress.  I could not, in good conscience, condone with my vote a flawed process that denies the American people an opportunity to participate in their Republic on issues of this magnitude.”

Alabama State Representative (R) Jay Love said on Facebook, “I am taking off my political hat and putting on my small business owner, father of 4, and concerned citizen hat. The Congress and President have let all Americans down tonight. We have raised taxes on all Americans and done nothing about cutting the deficit and the long term debt problem. We are leaving our children a weakened country and with the right leadership we could have begun to fix it.”

Rep. Roby said, “I ran for Congress campaigning on the need to get government spending under control. A last-minute deal that raises taxes without cutting spending goes against my core beliefs and against the conservative values of Alabama’s Second Congressional District. Alabamians didn’t send me to Washington to raise their taxes so the President can spend more of their hard-earned dollars. They sent me to get control of spending so we can ensure America’s promise for the next generation.”

Rep. Brooks said, “According to Admiral Mike Mullen, former chairman of the Joint Chiefs of Staff, America’s greatest national security threat is its debt.  America should heed Admiral Mullen’s warning.  The Senate’s Fiscal Cliff bill, by itself, irresponsibly increases America’s debt by $4 trillion over the next decade.  Rather than cut spending, it increases federal spending by $50 billion in FY 2012-13 and $55 billion in FY 2013-14.  These spending increases will aggravate America’s risk of a debilitating insolvency and bankruptcy.”

State Rep. Love said, “The average American will be paying $1000 more in payroll taxes in 2013 than they did in 2012. Payroll taxes touch everyone who has a job.”

Rep. Roby said, “Washington doesn’t have a taxing problem; it has a spending problem. We have $16 trillion in debt. We spend more than a trillion dollars more than we take in every year. It’s past time we get serious about this country’s spending problem and restore fiscal sanity to the budget.”

State Rep. Love said, “We can’t tax the top 10% our way out of this. We could take every dime they make and it barely makes a dent. We can manage our way out of this if we have a hard cap on spending and if the economy were to grow at an accelerated rate as it did during the 90’s.” 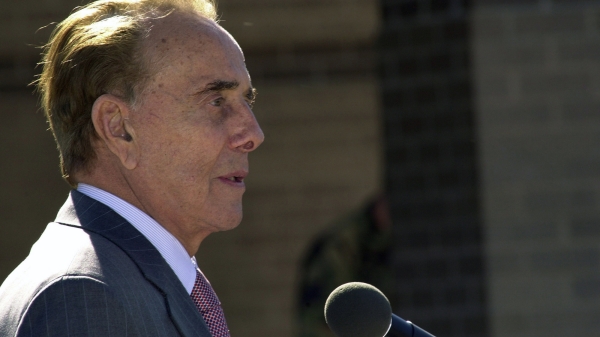 Dole, 98, announced in February that he was being treated for advanced lung cancer.