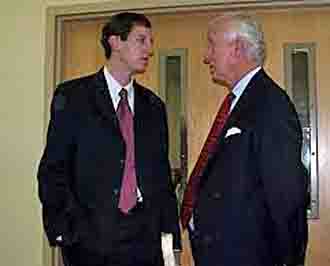 On Tuesday former Alabama State Senator Hinton Mitchem (D) from Union Grove passed away at age 74.  Sen. Mitchem was a businessman who served in the Alabama State Senate for over 30 years.  In his last term, Mitchem served as the Senate Pro Tempore for two years.   Mitchem served in the legislature for over 30 years.  His successor Clay Scofield (R) from Arab honored his passing with a statement on Facebook.

Senator Scofield said, “It’s a very sad day for Senate District 9 and the State of Alabama. My predecessor, Senator Hinton Mitchem has passed away. Hinton left a legacy for our District and our State that generations to come will benefit from. At my swearing in ceremony, at which Hinton was present, I told him and the crowd that I had big shoes to fill, and I meant it. He did so much for our area that many people may not even realize but I see it everyday. He was an honest man and true statesman and I thank the Lord that I had the opportunity to get to know him. There were times that I consulted him and he passed on advice to me that I still use today and always will. My thoughts and prayers go out to Judy and the family. He may be gone, but his legacy will always live on.”

Senator Mitchem retired from the State Senate in 2010.

Mitchem is survived by his wife Judy, his four children, and four grandchildren.