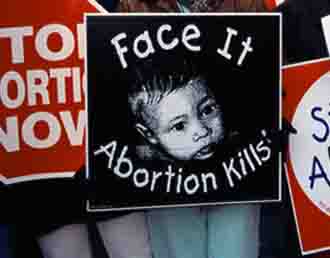 On Friday, over 500,000 Pro-Life activists gathered in Washington D.C. to protest the 55 million legal abortions that have occurred in this country since the controversial Roe vs. Wade U.S. Supreme Court Decision on January 22, 1973.

On Tuesday, U.S. Representative Robert Aderholt (R) from Haleyville said on Facebook, “Sadly, today is the 40th anniversary of Roe v. Wade. I am proud to stand up for life and today I reaffirm my commitment to protecting the lives of the unborn.”

U.S. Representative Mike Rogers (R) from Saks said, “As Roe v. Wade turns 40 today, I remain committed to passing laws that save the lives of the unborn and protect women.”

Rep. Aderholt said, “Since I first ran for Congress, I have been committed to defending our traditional, conservative Alabama values in Washington.  That means protecting families, respecting the sanctity of all life, and recognizing the role that religion has played throughout our nation’s history.”

Rep. Aderholt is a member of the Pro-Life Caucus in the House as well as the House Values Action Team, the Congressional Caucus on Fatherhood and the Congressional Coalition for Adoption.  Rep. Aderholt said, “Through my membership in these groups I’m able to work with like-minded Members to push conservative, values driven legislation in Congress.  I continue to work towards passage of the Constitution Restoration Act which I first introduced in March 2005.  This bill would help ensure that both state and local governments across the country are able to recognize God in the public arena, something that I believe was of utmost importance to our Founding Fathers.  I also wholeheartedly believe that we should look for ways to curb and stop abortions in the United States.  The rights of the unborn continue to be of the utmost concern to me.  All life is precious.  When people discuss abortion there is a tendency to couch the argument in terms of it being simply a choice or decision.  That’s not what it’s about. It’s about protecting the innocent lives of the most vulnerable among us.”

The Alabama House Republican Caucus are proposing the Women’s Health and Safety Act to address long standing dangerous and unsanitary conditions in the Alabama abortion industry.  The Caucus wrote, “Questionable Supreme Court rulings have eliminated the state’s ability to prohibit abortions altogether.  However, states may enact meaningful abortion-related reforms, and the Women’s Health and Safety Act is such a measure.  With this bill, House Republicans make clear that should a woman choose to have an abortion, it should be performed in the safest pre-and-post operative environment available.  Specifically, this legislation would require direct physician involvement and set mandatory standards for nursing care and post-operative follow-up visits at abortion clinics as well as establishing severe penalties for non-compliance.”

Rep. Chris Smith (R) from New Jersey is the co-chairman of the Congressional Pro-Life Caucus.  At the 2013 March for Life Rep. Smith said, “Forty years ago this past Tuesday marks the U.S. Supreme Court’s infamous, reckless and inhumane abandonment of women and babies to abortionists.  Forty years of victims — dead babies, wounded women, shattered families.  Forty years of government sanctioned violence against women and children.  Since 1973, more than 55 million children have been killed by abortion — a staggering loss of children’s precious lives — a death toll that equates to the entire population of England.  The passage of time hasn’t changed the fact that abortion is a serious, lethal violation of fundamental human rights. And that women and children deserve better. And that the demands of justice, generosity and compassion require that the right to life be guaranteed to everyone.”

Rep. Smith concluded, “Yet, President Obama systematically and aggressively promotes abortion at home and overseas.  Despite the fact that taxpayer-subsidized Planned Parenthood claims direct responsibility for killing over 6 million unborn babies, Planned Parenthood remains President Obama’s favorite organization.  Someday, future generations will look back on America and wonder how and why such a seemingly enlightened society could have failed to protect the innocent and inconvenient. They will wonder how and why a Nobel Peace Prize-winning president who spoke eloquently about caring, cherishing and safeguarding all our children could also simultaneously have been the “Abortion President.”  Know this Mr. President, we will never quit. In adversity, our faith and trust in God is tested, but it also deepens and overcomes and forges an indomitable yet humble spirit.  Know this: The pro-life movement is comprised of noble, caring, smart and selfless people. It is an extraordinarily powerful, non-violent, faith-filled human-rights struggle that is growing in public support, intensity, commitment and hope.  And know this Mr. President: The pro-life movement is not only on the side of compassion, justice and inclusion; we are on the right side of responsible science and of history.”

According to the March For Life’s website the group favors the adoption of a Mandatory Human Life Amendment to the Constitution of the United States. “Such an amendment would be simple and require that individuals and society provide protection for the right to life of each human in existence at fertilization. It would require that State laws conform to the Constitution and provide the same protection.”