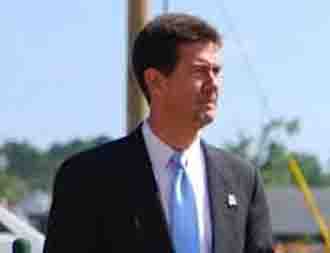 On Wednesday Alabama State Representative John Merrill (R) from Tuscaloosa held a rally at the Alabama State Capitol to announce that he will be running for the Republican nomination for Secretary of State in the 2014 election.

Alabama Commissioner of Agriculture and Industries John McMillan (R) said on Facebook, “My good friend, State Rep. John Merrill of Tuscaloosa, today held a rally at the State Capitol to announce his candidacy for Alabama Secretary of State. He’s high qualified and will make an outstanding constitutional officer. I wish him the best!”

Rep. Merrill said that Secretary of State is an office that he had wanted since he was a boy and has followed in closely in recent years.  Merrill said that he would like to improve the adoption process in Alabama.  After assisting some constituents on an adoption Rep. Merrill said, “I recognized that there were a number of issues that were probably going unreported to me, or other members of the Legislature or other people throughout the state when it came to certain things that people have to deal with every day, and adoptions are one of them.”

John H. Merrill was elected to the Alabama House of Representatives in the historic class of 2010 when Republicans swept both Houses of the state legislature due to widespread voter dissatisfaction with the Democratic leadership of the Alabama legislature and the liberal policies of President Barack H. Obama (D).

Current Alabama Secretary of State Beth Chapman (R) can not run for a third term because of term limits.  Merrill praised the job that Chapman has done and said he would not have run against her.

John Harold Merrill is the son of former Cleburne County Probate Judge Horace S. Merrill and retired teacher Mary T. Merrill.  Merrill grew up Heflin in Cleburne County.  Merrill is a graduate of Cleburne County High School.  John graduated from The University of Alabama where he was President of the  Student Government Association (SGA) in 1986-87.  While at University, Merrill served two Congressional Internships in Washington, D.C. for Congressman Bill Nichols (D) and U. S. Senator Howell Heflin (D).

Merrill works as a bank manager and has served as a National Account Executive and Manager at Randall Publishing Company, the Director of Business Development for the Chamber of Commerce of West Alabama (1993-94), and the Director of Community Relations and Community Education for the Tuscaloosa County Board of Education.   His wife Cindy is the principal at Westwood Elementary in Tuscaloosa County. They have two children.

Voter file maintenance is a four-year process that uses a two-step mailing program to identify voters who may have moved.