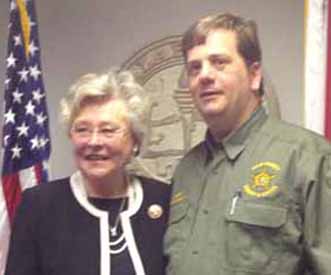 MONTGOMERY–On Thursday, Dale County Sheriff Wally Olsen received a standing ovation from the members of the Alabama Senate. The Senate recessed early for lunch but asked members to remain on the floor. As Olsen approached the podium all members stood and greeted him with applause. Olsen was the sheriff in charge of the coordination and rescue of Midland City 5-year-old student Ethan. Olsen took office in 2007 and is serving his second term.

In late January, 65-year-old Jimmy Lee Dykes boarded a school bus, killed driver Charles Albert Poland Jr., 66, and kidnapped Ethan holding him in a bunker on Dyke’s property for a week. Poland died protecting 21 other children that were on his bus. Olsen reminded the press that there were other children involved in this incident.

During that week the state of Alabama held its breath as did the community in Dale County. Ethan was rescued and Dykes was shot to death on February 4 ending the weeklong holdout.
Ethan suffers from Asperger’s syndrome and ADHD requiring medication. Dykes did allow the medication to be delivered via the 4-inch pipe that went into the bunker and was also used as a communication device between him and law enforcement.

About the accolades, Olsen said, “I’m doing what I was elected to do and that is take care of the people in my county. It is an honor to serve them as their sheriff and an honor to serve amongst the sheriffs of the state of Alabama.”

He went on to say, “Everything we do we have to have help, my support comes from God. I give him credit for everything I do.”
Senator Holley said that there were over 300 people that held vigil at the site. Olsen made sure they had food, water and other accommodations were available, all while running the operation.

Olsen said, “The support we received from our community and surrounding areas. Federal law enforcement came up to me after it was over and said we have seen a lot of things but we have never seen any community come together like this.”

Olsen said the situation was overwhelming and that “the best trained men and women in the country had never experienced a situation like the one that came up in Dale County. By the grace of God we were able to get him out alive.”

Senator Harri Anne Smith (I-Slocomb), represents that area of the state. She was in constant contact with Ethan’s family and law enforcement throughout the whole ordeal. She said of Olsen, “We are truly blessed in the Wiregrass Area to have Sheriff Wally Olsen. He was always in charge even when they brought down the top notch FBI, SWAT teams from Washington they let him remain in charge.” She said that Olsen did not sleep for 7 days.

“Publicly, our gratitude from the whole state, thank you for what you did and what you do every day,” said Smith.
Olsen said they are still unsure what prompted Dyke to take Ethan but that he kept saying that he had a story that he wanted to get out. He never relayed the story to law enforcement. Dyke’s kept telling officers that if his demands were not met what he was going to do was really, really bad. Olsen would not say what those demands were but said that they would have been impossible to meet.

There were two explosives, one in a pipe and one in the bunker, they were not disarmed when law enforcement began to go in. One Dykes was able to detonate was by the road. It was in PVC pipe and when law enforcement began to enter the bunker with Dyke he detonated the explosive. Officers had found the device earlier and were able to secure it before it was detonated to keep anybody from getting hurt. He said they secured it with sand bags and “things of that nature” to cover it and put up a perimeter around the area to keep people away. The IED that was in the bunker he was never able to detonate. Olsen said the bombs were powerful enough that they could have been fatal.

Olsen said they now believe that Dykes had formed a friendship with Poland prior to the incident. Olsen said he believes that Dykes had the plan during the whole time that he had befriended Poland. He said that Dykes had cleared out an area close to his property where Poland could turn the bus around because it is a dead end road. Olsen said there were many contributing factors that indicate Dykes befriended Poland while planning the abduction and murder. He said that there are “a lot of writings and such that are still being analyzed” but could not release any details.

When asked about Ethan, Olsen responded, “Ethan still has a long way to go but he has a lot of support. Everybody is trying to pull together to make sure he is okay as well as the other children. You’ve got to remember there were a lot of other children that were involved in this incident and we want to make sure they are taken care of as well.”

About the standing ovation, Olsen said, “It was an honor.”