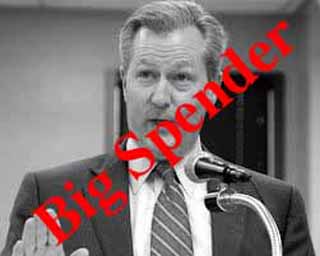 Editor’s Note: All financial data for this report is according to state spending records on www.open.alabama.gov.

Warning: Tea Party activists, small-government conservative or, any taxpaying citizen of Alabama should sit down before reading any further. Maybe bind your head with duct-tape, because it just might explode.
Hubbard, a man who has claimed that he is a real republican, increased spending in the Speaker’s office over his democratic predecessor by 82.6 percent.

In 2008, under then-Speaker of the House Seth Hammett, a Democrat, the Office of the Speaker spent thousands of dollars in public money on “Services” provided by outside consultants. It was $2,880 to be exact.

Last year, under Republican Mike Hubbard, Alabama taxpayers paid $135,820.74 for “Information and Research” – with most of that going to one of Hubbard’s top political consultant.

To be clear —that is a 4700 PERCENT INCREASE in the amount of taxpayer dollars spent by the Office of the Speaker of the House on political consultants under Hubbard, a Republican and so-called fiscal conservative.

In fact, under Hubbard’s leadership the Office of the Speaker has increased spending beyond what can rationally be called responsible or conservative. No office in Alabama government, has grown government by such a wide percentage. Hubbard has proven by his actions that he has more in common with tax-and-spend liberals than small government conservatives.

A comparison of total spending for the Office of the Speaker of the House shows that Mike Hubbard has been anything but a fiscal conservative when it comes to spending the public’s money on the perks of his office.

Between the fiscal years 2008 (when Democrat Seth Hammett was Speaker) and fiscal year 2012 (the most recent complete year of spending under Hubbard), total taxpayer dollars spent on running the Office of the Speaker of House nearly doubled. Total spending for the Office of the Speaker of the House increased 82.6 percent– from $488,638 under Hammett to $892,492 under Hubbard last year.

The office payroll line item increased 54.5 percent under Hubbard, from $364,014.30 in ’08 to $562,511 last year. Perhaps the most shocking increase comes in the amount of taxpayer dollars Hubbard spends on contracts with political consultants. Of the $135,820.74 in public money spent on outside contracts in Fiscal Year 2012, $96,000 of that was paid by Alabama taxpayers to Azbell Communications, the one-man operation run by David Azbell. Azbell was the co-writer of Hubbard’s vanity book publication, Storming the Statehouse.

Hubbard said he would reduce the size of government, but has increased his own office to standard’s unknown to his democratic preprocessor. In a time when all state agencies are being faced with austere measures of fiscal constraint, the Speaker has ignored his responsibility to do the same.

A Google search of the name “Mike Hubbard fiscal conservative” yields only a handful of returns, and they mostly refer to the fact that Hubbard says he uses money raised by his PACs to “to support conservative, pro-business candidates for public office.” It would seem that Hubbard sees taxpayer dollars as a part of his pro-business agenda, meaning he is in the business of being a big spending business-republican.

While Hubbard has worked to cut state-workers, deny pay-increases and downsize government for everyone else, he has overseen what can clearly be described as a growth industry of government—the Speaker’s office.

In 2012, Hubbard’s Chief of Staff Josh Blades pulled down an executive salary of $105,000. In what conservative universe does a young man like Blades, working for what is meant to be a part-time Speaker doing making a six digit salary?

What type of ‘information and research’ does Azbell conduct for the Speaker, hit jobs on reporters, other republicans? It is widely known that Azbell saw a big increase in pay when he was writing Storming the State House, yet, the book is finished and Azbell is still living large off the taxpayer’s dime.

Hubbard’s office appears to be on target to keep pace or outspend taxpayer money in FY2013. Not figured into the double digit-growth of the Speaker’s Office is the tremendous amount that has gone into remodeling the StateHouse and especially the Speaker’s suite of offices. Construction cost and decorating expenses have been hidden and multiple requests for information have been denied.

The Speaker’s Office now adorned with new carpet, new paint and expanded spaces are just a few of the new trappings of power. The Speaker’s suite is outfitted with multiple flatscreen televisions one completely dedicated to a continuous rotation of pictures featuring Mike Hubbard with political dignitaries. The Speaker routinely travels with an entourage and personal body guard, many times in two black SUV’s with tinted windows. Transportation more suited to the President or the Governor not the people’s representative. It is the Speaker’s privilege to be provided a state employee for protection, however, few have ever accepted such a high level of security.

Where is the outcry from those who promised the voters of Alabama that they would end frivolous government spending? Hubbard has outspent Democrats by an unprecedented amount. Yet, not one peep is heard from his followers on the fourth floor of the StateHouse, which has also been graciously remodeled.

No one dares stand-up to “Diamond Mike” because they fear retaliation. One can only hope that once those in the Tea Party and those who still stand for small government are made aware of his reckless spending they will take a stand.

Speaking to the Anniston Star in 2011, Hubbard spoke of the budget crisis facing the state, “This crisis gives us an opportunity to examine every dollar the state spends. Now, I can promise you there are wasteful programs. We need to find them and reduce those wasteful programs and reduce the workforce.”
When will people demand a Real Conservative Republican in the Speaker’s Office, instead of this  tax-and-spend one.