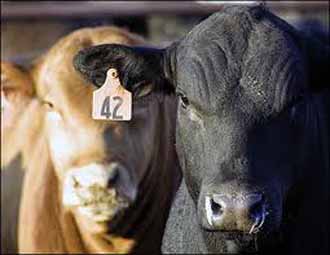 Auburn University Agriculture Economics Professor Walt Prevatt addressed the membership of the Alabama Cattlemen’s Association about the outlook for cattle prices in 2013 at their 70th annual convention in Birmingham.
Prevatt said that the stock market is rosy because of U.S. monetary policy.  The Federal Reserve has been printing money which has influenced the Dow Jones.

Prevatt said that beef is the preferred meat of choice; but that beef demand is hurt when consumers have limited incomes.  Prevatt said that the U.S. Senate passed a $trillion in tax increases that night, but he did not expect that to pass the Congress.  Prevatt said, “I am concerned about additional taxes we may see in the future.”  The combination of increasing taxes which reduce disposable incomes and a still weak employment will likely mean that consumers could have less discretionary income for steaks this year.  “I am real concerned about demand.”  “We need more people employed.”

Prevatt said that total meat consumption per consumer has been dropping for the last several years due to an aging population.  The amount of beef that the average American eats has been declining since the 1970s.  Turkey consumption is flat and per capita chicken consumption has been down since 2004.  “Consumers are not spending as much on meat.”  People are making different choices and choosing to spend their money on things like cell phones.
Choice beef prices have climbed to 530 cents a pound up from 290 cents in 2000.  The restaurant business dropped during the Recession; but demand for ground beef rose as steak demand weakened.  The steak demand came back strong last year.  “Export demand outlook looks good.”  Beef exports have risen to 2.3 billion pounds after it crashed during the mad cow disease scare and the value of that beef has risen to $5.5 billion in exports.

Prevatt said that Japan has opportunity of improvement in the amount of American beef that they concern, but he is not optimistic about the Mexican market.  The U.S. is getting competition from New Zealand.  “Right now New Zealand is putting an awful lot of product on the market.”  Beef exports to Russia, Mexico, and Vietnam are all down, but total exports are up because the currency exchange rate is favorable due to U.S. monetary policy.  “I don’t fully understand what the government is doing.” Prevatt said that the weak dollar helps us with our exports and decreases imports.  “The weak dollar has really helped us with beef exports.  If you strengthen the dollar you will reduce the amount of product we are shipping.”

Prevatt said that declining cattle inventories are not just profitability driven but is also limited by available land resources.  Prevatt said that a lot of that land has been plowed up and turned into cropland, planted in pine trees, or sold as rural home sites.  Prevatt said that the U.S. has lost a half million head of beef cattle just since 2010.  “We are going to have to retool and hold some replacement heifers back,” to replace their aging mothers.  Prevatt said that we will see a significant increase in prices in this market when those heifers are retained to become cows instead of sold to the feedlots for the beef market.

Prevatt said that the U.S. is importing up to 1.4 million head of live cattle from Mexico and another 700,000 head from Canada.  The industry is also making up for the declining cattle numbers by growing out the cattle longer so that they are harvested at much higher carcass weights.  In recent years, the hot carcass weight (the weight of the carcass shortly after the head, hide, blood, hooves, stomach contents, and organs are all removed) has climbed to 880 pounds….up from 830 pounds just a few years ago.  It was 475 pounds in 1975, but the genetics of the cow herd have changed substantially since then too larger, growthier animals.

Prevatt said. “I think you are going to see less supply in 2013.”  Dr. Prevatt is also predicting weaker demand so cattlemen could see slightly lower prices in 2013 than they received in 2012.

Another large factor to consider is the price of grains especially corn and soybeans.  Alabama cattle are born on the farm and grow up on pasture eating a forage based diet.  However since the American consumer prefers the flavor of grain fed beef, those half grown calves travel to the west where they are ‘finished’ on grain in feedlots.  When the cost of grain is up those feedlots pay less for the Alabama calves.  For the last few years grain prices have been up as more grain production went into ethanol production.

Corn has traded as high in some places as $7; but the futures price has recently dropped from $6.60 a bushel to $5.65 a bushel.  Prevatt said that he is hoping that 99 million acres of corn is planted in this country this year.  If that happens and there is a strong harvest Prevatt said some experts have predicted corn trading in the $4s; but much of this year’s corn crop is already pre-sold at the higher prices.  Prevatt however warned that Kansas, South Dakota, Nebraska, Colorado, and many of those other states have been unusually dry this winter.  If they don’t get enough moisture less acreage will be planted, harvests will be lower, grain prices will be up, and the sell prices of those calves could drop when they go to market as the feedlots are forced to pay more for the available feed grains.

Prevatt said that the cost of breakeven per calf for the Alabama cattlemen was based on the cost of hay and feed to get the cows through the winter months, the cost of fuel and fertilizer used to grow the hay and pastures, the percentage of cows who successfully raise a calve each year, and the weight and sell price of those calves.  Prevatt said that ranchers with costs of less than $500 per cow, a 90% calf weaning rate, and weaning weights in excess of 600 pounds are likely to do well financially.  Ranchers with production cost of greater than $600 per cow need greater production levels and higher cattle prices for them to breakeven.  If productions costs are higher than $700 per cow, the rancher will make money only in the best possible combination of production and high prices.
Prevatt said that cattlemen have to look at seasonal price trends to make purchases of commodities like feed grains.  ”Where we can, join with neighbors to buy in bulk.  “That corn production we have been banking on may not materialize.”  Prevatt said that average annual temperatures have been increasing since the mid 1990s, which if it continues potentially could lead to more frequent droughts.  “We are not going to see the cheap feedstuffs we have seen in years past.”  Prevatt said many cattlemen in Alabama need to decrease their stocking rates so that they have to purchase less grains to supplement their cows in droughts and winter.  Prevatt told the cattlemen, “If you are currently profitable now is the time to grow your operation.”

In this article:Alabama, beef, corn