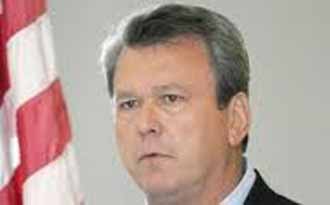 On Thursday the Jefferson County Commission’s Administrative Services committee is expected to consider a resolution Thursday to hire Bolin as lead county attorney.

The Republican and former Jefferson County probate court judge has not yet formally resigned, as he has not been formally resigned yet.  Alabama Governor Robert Bentley (R) will appoint a judge to finish out Justice Bolin’s term.

Chief Justice Roy Moore told al.com’s Mike Kason said, “I know that Jefferson County is going to get an excellent person as their attorney.  He will be a good leader there as he has been on the court. I applaud him for his willingness to face what he’s going to be facing. But I know he’s the man that can do it.”

Jefferson County is currently in bankruptcy, the largest government bankruptcy in American history.

“The state of Alabama will not allow such an authoritarian power grab to go unchecked," Attorney General Steve Marshall said.