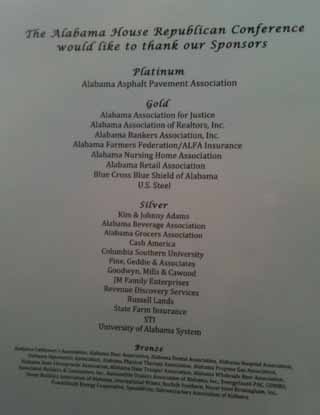 MONTGOMERY—Last week (May 15th, 2013) with legislation still pending before the Alabama House of Representatives, all business stopped for a House Republican fundraiser.

The Alabama House Republican Conference—led by Speaker of the House Mike Hubbard—raised around $100,000 dollars at the 90 minute event. Thus putting an exclamation point on the new republican transparency.

The who’s-who of Montgomery’s well-heeled lobbyists and Big Business donors climbed the steps of the RSA Terrace building—across from the Statehouse— to fill the coffers of the politically partisan non-profit.

The Alabama Political Reporter had a reporter inside the building but was asked to leave by Rep. Micky Hammon (R-Decatur) who said that reporters were not welcome to cover the fundraiser.

As a non-profit foundation the Alabama House Republican Conference is under no legal obligation to disclose its donors and has not publicly done so. However, inside the event a large board touted the names of the gala’s sponsors.

So successful was the financial recruiting that a Platinum category had to be established to accommodate Alabama Asphalt Pavement Association, who has as their lobbyist SAHR led by Speaker Hubbard’s closest associates Dax Swatek and David Azbell.

The Alabama House Republican Conference secretary of state filings show the non-profits mission is “education.” With over 50 lobbying groups and big business organizations in attendance it begs the question, what type of education were these special interest groups receiving for their $5000 dollars checks?

The invitation claimed that special remarks would be given by Speaker Hubbard and the House leadership during dinner and drinks. Certainly, Alabama voters would like to have this type of exclusive information but most Alabamians don’t have an extra few thousand to lavish on such political affairs.

While narrowly within the confines of Alabama’s Fair Campaign Practice Act, the Alabama House Republican Conference strains to point-out that, it, “is not a Political Action Committee.”

Hubbard, recently told the Associated Press that the Alabama House Republican Conference was used to “mostly educate ourselves.”

According to the man who has acted as the GOP chief-fundraiser, and spokesperson for so-called “real-conservatives,” Hubbard has remained quiet as to the real reason the people’s business was halted in the House so that he could entertain lobbyist and corporations.

What private advice was handed out to these high-end donors during the 90 minute cash-call?
Tea Party activist—like the ones who have lobbied on behalf of conservatives values during the 2013 session—and concerned citizens seem to have not received an invitation to receive education from Hubbard and company.

This type of secret-fundraising has become a national trend especially among republicans.

During the 2010 elections many watch-dog groups worried about the impact of SuperPACs on campaign fairness. But in reality it was the 501 (c) (4) non-profits that played the biggest role in unreported campaign funding.

The study found that more than 100 non-profit 501(c)(4)s spent roughly $95 million on political expenditures in the 2010 election compared with $65 million by super PACs.

The Alabama House Republican Conference, established in 2011 appears to be positioned to take advantage of this growing trend of skirting campaign finance laws through “social welfare,” education.

A recent Senate Bill 445, sponsored by Bryan Taylor (R-Prattville) and Mike Ball (R-Huntsville) would give groups like Hubbard’s Alabama House Republican Conference the ability to transfer funds in a manner mimicking PAC-to-PAC transfers, while allowing political contributions to remain unreported.

The House Judiciary Committee will consider legislation on Wednesday to allow medical marijuana in Alabama.