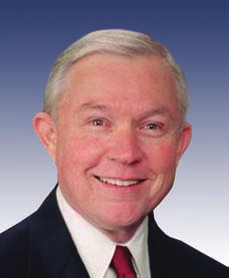 On Friday U.S. Sen. Jeff Sessions (R) from Alabama said that the Gang of Eight should be straight with the American people on their plan, which Sen. Sessions said, “weakens current law, undermines future enforcement, and puts amnesty—not enforcement first.”

Sen. Sessions continued, “Now the bill has been reviewed and there can be no dispute: it weakens current law, undermines future enforcement and puts amnesty—not enforcement—first. So new promises of amendment ‘fixes’ to save the bill should be viewed with great skepticism: every time, on every issue, the promises have not matched with reality. They promised back taxes—but the requirement isn’t there; they promised tight restrictions on welfare benefits—but state and local benefits, as well as tax credits, will be available immediately and federal welfare access is granted to millions of illegal immigrants starting in five years; they promised to protect workers—but this bill would devastate workers by tripling the number of legal immigrants over the next decade and doubling the number of guest workers.”

Sen. Sessions concluded, “No small cosmetic fix can save this bill, with so many provisions clearly authored by special interests whose chief desires are lower wages and amnesty—rather than a lawful, rational system of immigration. As the ICE officers’ association warned: ‘instead of cracking down on the Administration’s abuse of power, S. 744 places unprecedented new restrictions on interior enforcement—making the current situation much worse and much more hazardous. It is as if S. 744 were explicitly written to handcuff law enforcement officials—binding their hands while giving virtually unchecked authority to executive branch officials to prevent future removals, including removals of criminal aliens.’ And as the USCIS adjudications officers warned: ‘the legislation was written with special interests—producing a bill that makes the current system worse, not better. S. 744 will damage public safety and national security and should be opposed by lawmakers.’”

Sen. Sessions has long been an outspoken critic of the “Gang of Eight” Immigration plan. He believes it will lead to a flood of new immigrants (legal and illegal) and will depress wages of American workers and worsen an already bad employment situation particularly for younger and less skilled Americans.

Despite Sessions opposition, the immigration reform bill advocated by President Obama appears to enjoy enough bipartisan support that it appears likely to pass in the U.S. Senate. House Republicans appear divided on the issue with conservatives opposing amnesty without strong measures being in place to enforce immigration laws and moderates supporting the U.S. Chamber of Commerce backed immigration reform legislation.