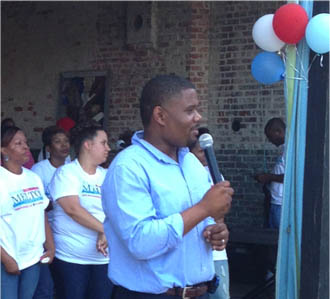 The event was free and open to the public to come together for “good food, good music and wonderful people.”

Melton criticized the Republican supermajority in Montgomery, especially calling out the Republicans who passed the Alabama Accountability Act. He said that many legislators “want us to go back” but he believes “we have a future, and we have a great imagination.”

Putting that “great imagination” to use, Melton asked his supporters to,

Melton was joined at the microphone by several prominent elected officials who offered Melton their endorsement, including District Judge Bob Armstrong and Probate Judge Kim Ballard.

“He’s a man of integrity, he does what he says he will do and he’s a great public servant,” he said. “I think he’s done a great job. I couldn’t endorse or be behind anybody any stronger,” Armstrong said.

“I personally did not support Darrio when he ran the first time. He knows that. We’ve had discussions about that. I don’t see anyone out there who I would support unless I decide to run for State Representative,” Ballard said.

Orville Mayor Louvenia Lumpkin also spoke on behalf of Melton, saying he reminded her of “a modern-day Joshua.” Lumkin also emceed the event.

Selma Mayor George Evans and several City Council members arrived to the event at the end. Evans had planned to speak on behalf of Melton but the City Council’s regularly-scheduled work session ran late.

Several local musical groups performed at the event, including Pure Praise and Majestic Voices. Selma native and University of Alabama student Charlie Argo performed the opening act. The choir from Melton’s church, where he serves as an associate pastor, joined him on stage for his remarks and performed both before and after he spoke.

So far, no other candidates have declared an intent to run for Melton’s House seat.