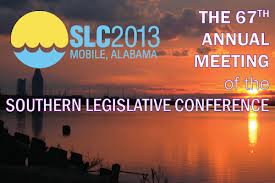 MONTGOMERY–The Southern Legislative Conference kicked off in Mobile over the weekend. It is expected to draw in more than 1,000 people from 15 southern states.

According to the Alabama Comptroller’s Office, the state is paying $100,000 to help put on the event alongside corporate sponsors like Alabama Power, Blue Cross Blue Shield of Alabama, Altria Client Services, International Paper and the Mobile Bay Convention and Visitors Bureau.

The SLC’s annual meeting is repeatedly the largest convention held within the Council of State Governments. The program is designed to “provide policymakers with an opportunity to engage regional and national policy experts on the issues that matter most to them and their constituents, sharing their experiences with others facing similar challenges and opportunities.”

Alabama Speaker of the House Mike Hubbard (R-Auburn) is the Chair of the Southern Legislative Conference. He estimates that the event will bring in nearly $1.8 million in economic impact to the Mobile area.

Although the event is scheduled for Mobile, the SLC was originally intented on holding the conference in Biloxi, Miss. Mississippi State Representative Billy Broomfield (D-Moss Point) was elected as the First Vice Chair of the Southern Legislative Conference in July, 2011, at the SLC meeting in Memphis, Tenn., however he was unable to be elected Chair in 2012 for several reasons.

In 2010 at the SLC meeting in Charleston, S.C., Tennessee Senate Majority Leader Mark Norris was elected the next chair of the conference, succeeding Robert W. Harrell, Jr. of South Carolina, the previous chair of the Conference.

In an Associated Press article, Broomfield said that he thought Mississippi’s chance to host the event was “sabotaged” by Republican leadership. House Speaker Philip Gunn and Lt. Gov. Tate Reeves said they could not raise the funds to cover the $800,000 tab for the event in the short timeframe.

While Gunn said that the fault lies wholly on Broomfield for not starting the fundraising process earlier, Broomfield feels that his race and party affiliation played a role in the lack of cooperation to host the event.

Gunn and Broomfield have clashed over SLC conferences before, which ultimately cost Broomfield the Chairmanship of the SLC. In 2012, Gunn refused to appoint Broomfield as a Mississippi delegate to the convention in Charleston, W.Va. When Broomfield was not in attendance, he was not able to be elected 2013 SLC Chair, although he was in line for the position. The 2013 chairmanship went to Alabama Speaker Mike Hubbard, and the convention came to the chair’s home state, as is SLC tradition.

The opening plenary session on Monday features guest speaker “Bo” Jackson, who was named ESPN’s “Greatest Athlete of All Time.” The closing session on Tuesday will feature Impact Alabama founder Stephen Foster Black. Impact Alabama “collaborates with colleges, universities, and communities throughout the state to develop and implement substantive service-learning projects designed to engage students in addressing human and community needs and enhance students’ senses of social and civic responsibility,” according to the SLC website.

The convention will wrap up Tuesday with a reception and state dinner. The 2014 SLC Convention is scheduled to take place in Arkansas, home of the 2014 SLC Chair Senator Keith Ingram.