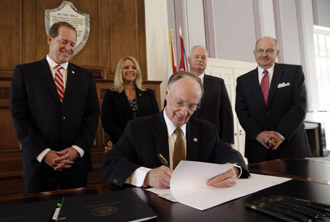 MONTGOMERY – Governor Robert Bentley on Monday held a ceremonial signing for three bills aimed at decreasing the abuse of prescription drugs in Alabama.

“Used properly under a physician’s direction, pain relievers and other prescription drugs bring much-needed comfort to many Americans, but their abuse is a serious and growing threat,” Governor Bentley said.  “As a physician, and as a governor, I understand the importance of fighting prescription drug abuse.  These bills are designed to help us address this problem while also protecting the rights of patients.”

According to the Centers for Disease Control and Prevention, in 2012, Alabama had one of the highest rates of prescription painkillers sold per 10,000 people.  Three bills that were approved during the 2013 Legislative Session will help decrease the abuse of prescription drugs.

Bills that are part of the Prescription Drug Abuse and Diversion Package include:

“There are many good physicians treating patients who have legitimate issues with pain, and we want to encourage the continued treatment of those patients,” said Buddy Smith, MD, Chairman of the Medical Association of the State of Alabama Board of Censors.  “Some states that have tried to combat prescription drug abuse have passed legislation that had disastrous effects on patient care and placed tremendous burdens on physicians.  This package presents a workable solution.  It comprehensively tackles this growing problem in our state, and we appreciate Representatives Weaver and McClendon, Senator Ward and the Governor for fighting prescription drug abuse.”

“A lot of work has been put into these bills over the past year, and it’s exciting to see them become law,” Representative Weaver said.  “Prescription drug abuse is on the rise, and healthcare providers across the state can confirm that the cases are becoming more frequent.  By addressing prescription drug abuse at the point of prescribing, our goal is to focus on this issue at the beginning of the process while also protecting patient confidentiality and preserving the rights of healthcare providers.”

“This package of new laws will help take prescription drugs off of the street corner, reduce drug abuse and make it easier to identify those involved in the illegal sale of prescription drugs,” Representative McClendon (R-Springville) added.

“Prescription drug abuse is a threat to the public health and safety of our citizens,” Senator Cam Ward (R-Alabaster) said.  “I was proud to work with Governor Bentley in the Senate to tackle this growing problem for our state.”