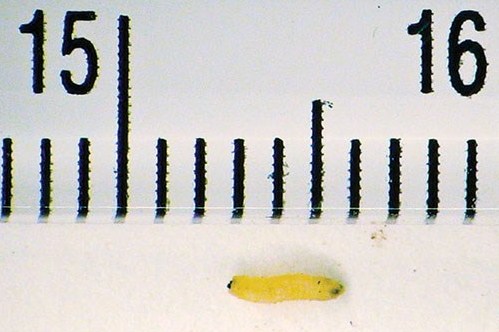 Alabama Cooperative Extension Specialist Henry Dorough spoke to the St. Clair County Cattleman’s Association about a new threat to one of Alabama’s most important forage crops…..bermudagrass.

According to an extension handout written by Drs. Hudson (U. of Ga), Hancock (U. of Ga), and Flanders (Auburn) and agent Dorough, in 2010 a small fly from Asia, Atherigona reversura, was found for the first time in the United States in Pierce, Jeff Davis, and Tift Counties in Georgia. By 2011, the fly (commonly called the bermudagrass stem maggot) had multiplied and was found in Alabama. By 2012, the invader was in all counties in Alabama and most of the Southeast and Hawaii.

No one knows how the fly, which is native to a range stretching from Japan, to China, and as far west as Oman and Pakistan.

The fly, which is only afflicting bermudagrass and stargrass, lays its eggs on the stem of the plant. When the maggot hatches, it bores a hole into the stem near a node. The maggot eats the stem from the inside effectively killing the portion of the plant above the ravenous maggot. The maggot is only one eighth of an inch long and the fly itself is tiny even compared to other flies.

Bermudagrass fields that are infested with the bermudagrass stem maggot have a frosted appearance. The bottom parts of the plants are green and growing while the upper leaves are withered and dead. This can dramatically decrease the yield of the field particularly if the infestation is heavy or rainfall is limited.

Losses are limited in fields that are being actively grazed by horses or cattle because the grazing livestock eat the maggots with the grass so provide some level of natural control and preventing the population of the flies from expanding out of control. Coarse varieties of bermudagrass like Tifton-85 withstand the flies better than finer stemmed varieties like Coastal, Russell, Alicia, and common Bermudagrass.

Bermudagrass, especially Coastal Bermudagrass, is one of the most important hay crops in the Southeast particularly for horses, who often show poor performance on Fescue hay.

Dorough showed the St. Clair County farmers and ranchers samples of both the flies and the damaged grass that he had collected early that afternoon from a field in St. Clair County. Dorough recommended harvesting the hay from an infected field immediately and then spraying the field with a pyrethroid based insecticide. According to the Aces publication, farmers should remove the hay from the field immediately as the hay could possibly be a source of re-infestation for the field.

This is a very new threat to Alabama’s farms and fields and both farmers and agronomists are still developing the best practices to combat this new challenge.

For more information ask your ACES office for the publication, Biology and Management of Bermudagrass Stem Maggot or click here: