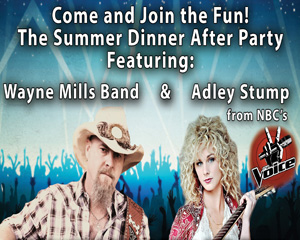 On Friday, Jonathon Barbee is kicking off his campaign for the Republican nomination for Public Service Commissioner with a Friday night party after the annual GOP Summer Meeting.

Barbee said in his invitation to the 860 Republican leaders and supporters,

“Come and join the fun at the Summer Dinner After Party, featuring Wayne Mills Band and Adley Stump from NBC’s ‘The Voice.'”

The after party event starts Friday night, August 23rd at 8:30pm and continues until 12:30am at the Rail Yard Brewing Company in Montgomery just one block from the Renaissance Hotel. Beer & Wine will be provided.

The event is free and is sponsored by Jonathan Barbee for Public Service Commissioner and Small Business Alabama. The Rail Yard Brewing Company is located at: 12 W Jefferson St, Montgomery.

Jonathan Barbee is also the Executive Producer at Media Works Communications, a TV and Film production company with locations in Birmingham and Nashville. Barbee has over 17 years experience in the TV and Film industry and has received numerous regional and national awards.

Barbee has been making videos since he was 15 when Barbee produced football, prom, dance, graduation, and occasional wedding videos.

Barbee was the Co-Executive Producer of “Tucker Time,” the Co-Producer of “Operation Valkyrie: The Stauffenberg Plot to Kill Hitler,” (the History Channel documentary), the Producer of the “Gator Bait” reality series, the Producer of the world award winning short film “We’re the Government and You’re Not,” as well as many commercials, music videos, and other productions.

Jonathan Barbee has been a member of the Republican Party since 2008 and was instrumental in working with legislators to create a film incentive bill for Alabama. Barbee, along with the Birmingham Regional Chamber of Commerce, the Alabama Film Office and other production companies helped to finally pass the Alabama Entertainment Bill (HB 69) in March of 2009.

On his website, Barbee said that legislation will help create more jobs and bring a new industry to Alabama. Barbee also serves on the board of directors of “Kid One Transport” and the “Educational Arts Corporation”in Birmingham, AL, which are both focused on helping kids.

Jonathan Barbee graduated from Hewitt Trussville Highs School and studied Broadcast Management and Criminal Justice at the University of Alabama.

On facebook Barbee said, “We can’t let Obama’s liberal agenda hurt Alabama’s Clean Coal Industry. There are over 5,000+ Alabamians who could lose their jobs and our utility rates would sky rocket. Let’s work together and stop this agenda…This is why a knowledgeable and conservative Public Service Commissioner is important for Alabama. We must fight this ‘go green’ liberal scam. It’s all about money and government grants from ‘Obummer.’ They don’t care what it costs us in the long run.”

Barbee will likely face incumbent Terry Dunn (R) who has been widely criticized by Alabama conservatives for his alleged ties to liberal environmental groups. The winner of the Republican Primary will represent the party on the November 2014 ballot.