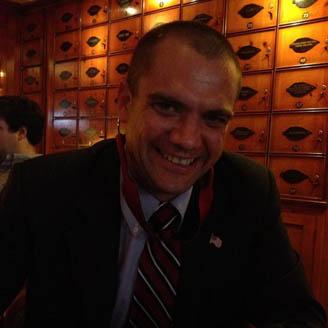 Five are solidly in Republican hands.

A sixth (the First Congressional District) is vacant following Congressman Jo Bonner’s retirement early this month, but, most political observers expect that it will stay in Republican hands.

The Seventh District is drawn intentionally to be majority minority. It cobbles together much of Birmingham, Bessemer, part of Tuscaloosa, Selma, Demopolis, and some of Montgomery, with vast swaths of rural Black Belt areas to find enough Black voters for their to be a majority minority congressional district in Alabama.

Tuscaloosa political consultant Matt Jenkins believes that the Seventh is winnable for Republicans.

“There is something missing in America and here in the 7th District of Alabama, ‘Front Porch Politics.’ Many people, friends and colleagues of mine have told me that having a Republican US Congressman in the 7th District will never happen, and Matt you are just wasting your time. Well friends, I am going to keep wasting my time. When we have Republican Donors throwing money into Terri Sewell’s Campaign War Chest (A Fact, not mentioning the source, we as Republicans should be fired up).”

“We as Republicans should be pissed-off at the fact that 12 of the counties in the 7th District do not have Republican Executive Committees. The only ones that have one are Tuscaloosa, Jefferson and Montgomery Counties and those my friends are split districts.”

“WHEN ARE WE AS REPUBLICANS GOING TO TAKE A STAND AND TRULY COMMIT TO MAKING THIS ENTIRE STATE RED? Every Republican out there in the rest of Alabama needs to realize one thing, the Democratic Machine is alive and well in the US 7th Congressional District. Every Republican out there needs to understand that our Unemployment Rate is high and things are not getting better, they are getting worse. The only exception to this is Tuscaloosa, where times are up on the upswing thanks to the University of Alabama and Mercedes Benz for expanding. Mayor Bell and his Democratic Machine is destroying our largest city, Birmingham.”

“Yes, Chairman, I am calling out the Republican Party in our State we voted to unite yesterday. Well…let’s unite Chairman and wear out our shoes and hit the pavement from Jefferson to Wilcox County and destroy the Democratic Machine and let’s bring hope to All Alabamians. I am one Republican and American that is dedicated to this cause and ask all my friends to join me in painting the rest of the State Red.”

The Seventh District was held by U.S. Representative Earl Hilliard, until he was unseated in a primary challenge by Rep. Artur Davis. The centrist Artur soon became tired of his role and ran for Governor of Alabama. The Democratic Party moderate grew tired of Washington and ran for Governor of Alabama in 2010, but lost the Democratic Primary to the more liberal Ron Sparks from Dekalb County. Davis has since changed his party affiliation to the Republicans and has moved to Virginia.

Terri Sewell (D) from Selma was elected to the seat in 2010 and won reelection in 2012, defeating White Republican Don Chamberlain by lop sided margins both times.