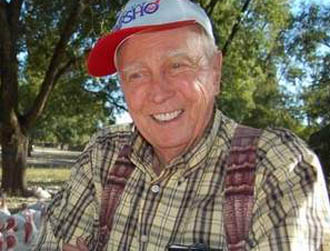 Noted Fort Deposit turkey farmer, restauranteur and Republican Bill Bates has died. Alabama Republican Party Chairman Bill Armistead, Ag Commissioner John McMillan and Alabama Governor Robert Bentley (R) were among the Alabama leaders who issued statements regarding the death of Bill Bates, who has donated a turkey to Alabama’s Governors since the 1940s.

Chairman Armistead said, “We were saddened to learn of the passing yesterday of Bill Bates. Most probably remember him as the founder of The Bates House of Turkey in Greenville, AL. He was also known as the turkey grower from Fort Deposit, AL who helped Alabamians celebrate Thanksgiving for more than 60 years and regularly brought one of his prize turkeys to Alabama’s Governor to receive a “pardon”.

“Bill Bates was one of the finest men I knew. A veteran of World War II, Bill served his country with honesty and integrity. He was a member of the greatest generation who loved God, his family and his country. Since 1949, Bill Bates has provided a turkey to the Governor on Thanksgiving. It is an annual tradition for Bill to bring Clyde the turkey to the pardoning ceremony at the Mansion. This year’s ceremony will not be the same without Mr. Bates.”

Chairman Armistead said, “Dianne and I extend our prayers to the entire Bates family during this difficult time. Those of us who have been involved in the Alabama Republican Party know of Bill’s decades of service to our Party and the State. Bill was a staunch conservative who actively supported Republican candidates for decades. Many Republicans have succeeded in winning their election in great part due to the support of Bill Bates.

“Mr. W.C. “Bill” Bates was an Alabama legend on so many levels, including his serving as a model citizen and outstanding entrepreneur in agribusiness. Mr. Bill passed away at his home yesterday at the age of 89. He built a successful business, Bates House of Turkey, from scratch when he returned home from WWII. The Bates family of Lowndes County have long been civic leaders and stalwart supporters of the Republican Party. My sincere condolences and best wishes to the Bates family.”

Chairman Armistead wrote, “My fondest memories of Bill were when we attended Republican National Conventions together and the inauguration of Republican Presidents. Bill was always the joy of every social function and frequently brought treats from The Bates House of Turkey that everyone enjoyed. We will all miss Bill so very much. From the day he was born to the day he passed, Bill spent a lifetime working with and growing Turkeys. Whether that was raising and growing them to smoking them, cooking them or serving the finished product in his restaurant.”

Chairman Armistead concluded, “Bill Bates lived a life that most people could only dream of living and he was loved by all who knew him. He was dedicated to his family, work and to the Republican Party. But it was his passion for turkeys that made Mr. Bates a legend across the State of Alabama.”