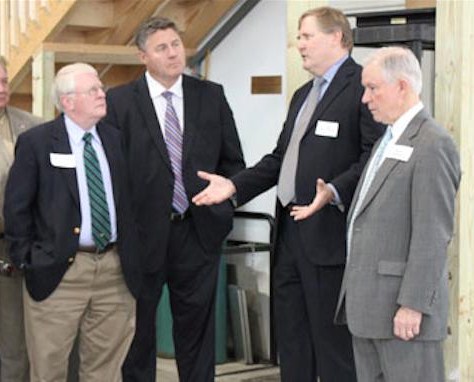 U.S. Senator Jeff Sessions (R) from Alabama released a written statement after the passing of his State Director and longtime friend, Chuck Spurlock (pictured on left).

Senator Sessions said, “I am heartbroken over the passing of my friend and State Director, Chuck Spurlock. Chuck loved life, had high ethical and moral standards, and always reflected the best qualities of public service.  He was a loyal patriot and a truly loyal friend and confidant.  We spent countless hours driving the state, often into the night, talking together.  He was the first person named to my Senate staff.”

Sen. Sessions continued, “Chuck was one of the most knowledgeable people, perhaps the most knowledgeable person concerning politics and government in Alabama over the past 25 years. Members of our delegation in Congress, friends, office holders, and candidates throughout Alabama regularly sought his opinion and insight.  His judgment was highly favored.  He loved the practical aspects of politics while being an historian and intellectual. The state staff he supervised loved him and he loved them and was constantly supportive of their work.”

Sen. Sessions concluded, “Chuck loved his family dearly and they him.  The constant support, encouragement, and affection Phyllis and the children showed him during this difficult time was inspiring to us all. I join Chuck’s friends across every corner of Alabama mourning the passing of a great man.”

Alabama Agriculture and Industries Commissioner John McMillan (R) said on Facebook, “We just learned the sad news of the passing of a good friend, Chuck Spurlock, Senator Jeff Sessions’s State Director. He died last night shortly before midnight. Chuck was an outstanding individual. He will be missed. Kathryn and I send our condolences to his family.”

Alabama State Representative Jack Williams (R) from Vestavia said on Facebook, “Sorry to learn of the death last night of Chuck Spurlock, who was Senator Sessions state director. Chuck had served as appointments secretary of Gov. Hunt and had been with Senator Sessions since his election as Attorney General.  Chuck was a wonderful person, a great asset to Senator Sessions and a strong republican. He will be missed.”

Conservative talk radio host Mark Montiel said on Facebook,  “Chuck was a class act and a great public servant. I worked with him in Governor Hunt’s administration when a great Senator named Jeff Sessions was the best U.S. Attorney in the nation. God will reconnect us later and there will be a lot of discussion about the “old days”. My prayers for his family and his many friends who will miss him.”

Charles H. “Chuck” Spurlock was born in Nashville, Tennessee. He had a B.A. in History and Religion from Duke University and a Masters Degree in European History from Vanderbilt University. Spurlock was an expert in politics and history that delivered lectures for many organizations across the state of Alabama.

After working in Gov. Guy Hunt’s administration, Spurlock served as Sessions campaign manager in Sessions’ first bid for public office……..as Alabama Attorney General.  Later Spurlock served as Sessions’ Press Secretary and Legislative Liaison in the Attorney General’s office.  In 1996, when Sessions first ran for the U.S. Senate, Spurlock was the Finance Director for his campaign.

Chuck Spurlock was the first member named to Sen. Sessions’ staff and has served for the past 17 years as Sessions’ State Director.