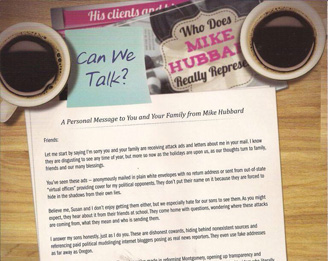 In a recent campaign mailer (front, back) Speaker of the House Mike Hubbard (R-Auburn) seeks to persuade the voters in his district that revelations about his alleged criminal deeds and the investigation in Lee County are all a part of a grand conspiracy. He specifically takes issue with an opposition mailer that recently appeared in mailboxes throughout the district that asks, “Who Does Mike Hubbard Really Represent?”

Hubbard says that the stories referenced in the mailer are from, “Dishonest cowards hiding behind nonexistent sources and referencing paid political mudslinging internet blogger posing as real reporters.”

This is a mouthful of accusations coming from a man who has hired one of the State’s leading white collar criminal defense lawyers to protect him from anyone who might have said nasty things about him or his family.

The mailer to which Hubbard refers quotes from three stories, one written by Kim Chandler of AL.COM, the other two by me, Bill Britt.

These reports deal with the fact that during the 2013 legislative season, Hubbard voted yes 11 times to insert language into the State’s General Fund budget that would have benefited one of Hubbard’s lobbying clients American Pharmacy Cooperative Inc. (APCI).

Ms. Chandler and I are both credentialed professional reporters with the State of Alabama and the Alabama Press Association. Somehow I doubt that Hubbard is referring to Chandler, given past statements made by Hubbard and his lackeys about me.

Many of the same stories we have written about Hubbard have appeared in major news outlets around the state. There is no doubt we have been the most aggressive at looking into his questionable dealings during his time in the legislature, as well as his tenure as Chairman of the ALGOP.

On our news site there is a section called Stealing the State House, which chronicles most of Hubbard’s shady deals, pay-to-play schemes and the many ways he has used his office to enrich himself and his clients.

Hubbard, nor his minions online or on radio, have ever challenged the facts presented by the Alabama Political Reporter; they have only attempted to attack the messenger.

This is one of the oldest tricks that politicians use when convicted by facts; they question the motives of the writer.

Truth even printed on the heel of the Devil is still truth, so this is a spurious method of argument suited to men of low intelligence and even lower character.

This is but the latest round of finger pointing by the beleaguered Speaker. He has recently blamed Attorney General Luther Strange for conducting a political witch-hunt against him. He has accused the head of the Attorney General’s white collar crime division of trying to make a false case against him because the prosecutor Matt Hart is unstable. He has even gone so far as to say Hart was fired from his job with the US Attorney’s office because of mental problems.

Of course, Hubbard is alway ready to blame Liberals who wants to return Montgomery to the days when Democrats ruled the town.

The only person Hubbard is not willing to blame for his legal problems is himself.

In a very sad part of his letter to his constituents, Hubbard refers to the fact that these reports are hurting his children.

It is alway a terrible thing when children are involved, but perhaps the Speaker should have remembered the Biblical admonition in Proverbs 11:29:

“He that troubleth his own house shall inherit the wind.”

The Aramaic translation of Proverbs 11:29 reads,

The problems of Mike Hubbard do not lie with the press, Attorney General Strange, Matt Hurt or some unknown group of liberals.

The problems facing Hubbard are a result of his own moral corruption and betrayal of his office.

Perhaps Hubbard never learned the lesson that when you point your finger at someone else you are pointing three back at yourself.