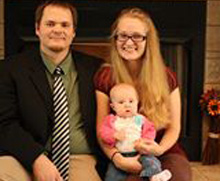 Alabama House of Representatives District 31 candidate, Jeshua Screws, whose petition for ballot access was disqualified by the Alabama Secretary of State office, went on Facebook and blamed corruption for the rejection of his Constitution Party candidacy for the HD 31 special election in Coosa and Elmore Counties.

“Due to corruption in the Secretary of State’s office, I was rejected ballot access for HD 31. However, Yahweh is still in control. Thank you to everyone who supported me as I followed Yahweh in obedience.”

“The state never even looked at the majority of signatures. They decided to do what is called sampling, where they pull a few random pages take the percentage and multiple it by how many you turned it. Unfortunately, the code states they have a choice of which method to use. This leave us little legal ground except to possibly challenge the formula they use. It is almost like they are inviting us to sue, with the possibility of depleting our financial resources. Jeshua was able to speak directly with Secretary of State Jim Bennett and advised him he did not believe we would sue but that he was praying for his salvation and the salvation of everyone in the office and their repentance. Mr. Bennett’s reply was “OK”.

“They didn’t verify all the signatures. I needed 519, and turned in 647. They did a “random” sampling and said that only 66% of the signatures were valid. There was nothing ‘random’ about it.”

On Friday Probate Judge John Enslen confirmed in a written staement that the upcoming January 28, 2014, run-off election between Mike Holmes and Jimmy Collier will determine the final winner for the vacant house seat created by the resignation of Barry Mask last October.

Probate Judge Enslen received word from the Secretary of State late on Thursday, December 5th that no one legally qualified as a third party candidate. Enslen said,

“Due to the lack of a qualifying third-party candidate, there will be no general election on March 25. The winner of the January 25 run-off will be the representative for HD 31.”

Constitution Party Candidate Jeshua Screws had turned in enough signatures to force a general election between himself and the eventual Republican Primary winner, but the sample taken by the Alabama Secretary of State’s office determined that too many of those signatures were invalid for one reason or another, thus the necessary high bar for a third party candidate to qualify was not reached.

Only registered voters who reside in District 31 can sign such a petition.  Most people don’t know with certainty where their home is districted and this is made more complicated this year because of redistricting which will change many people’s districts in June.  If you are not a registered voter your signature would be invalid.  If you are a registered voter, but you live outside of the House District 31 lines set after the 2000 Census your signature would also be ruled invalid for the purpose of qualifying a third party candidate for the House District 31 special election.

Enslen said, “This is good news for Elmore County residents living in House District 31 in at least one respect.  The people will now have a representative seated in the legislature for a majority of the 2014 session that begins in January.  Had a general election been required, it would not have taken place until March 25, 2014—too late for effective representation in the 2014 regular session.”

Judge Enslen said, “Amendment 97 to the Alabama Constitution dispenses with the need for a special general election in our current circumstances.  Where the secretary of state determines that a legally qualified candidate is unopposed when the last date for filing certificates of nomination has passed, the general election shall not be held.  On January 28, 2014, either Mike Holmes or Jimmy Collier will be unopposed because the date for filing a third-party certificate of nomination will have passed without a qualifying third-party.”

Since no Democrat has qualified to run, a special general election is not necessary so the winner of the special Republican Primary runoff election between Mike Holmes (71) and Jimmy Collier (68) will be the automatic winner of the election, since Screws’ signatures were not validated by the Alabama Secretary of State’s office.  The special general election would have been held on March 25th.

Jeshua Screws is a full time volunteer at a home for the children of incarcerated parents in Wetumpka Alabama, was a U.S. Army Chaplain Assistant, has a B.S. in Christian Ministry, and a Masters Degree in Political Science with Auburn University in Montgomery.  Jeshua is also the Chaplain for the Constitution Party of Alabama and serves on the Board for Personhood Alabama.

Alabama Secretary of State Jim Bennett (R) was appointed by Alabama Governor Robert Bentley to finish the remainder of the term of Beth Chapman (R) who resigned the office to accept a position with ALFA.