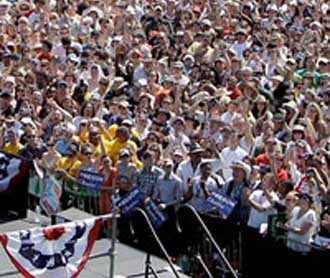 Terry Jones from Hazel Green announced this week that he will be running for the Alabama Legislature in House District 21 as a Democrat against Representative Jim Patterson, (R) from Meridianville.

The Hazel Green teacher and coach, Terry Jones said, “I had never thought about running for office until this past year when our state legislature passed the Accountability Act. Our representatives in Montgomery voted to take a million dollars out of our public schools and use that money to send kids in South Alabama to private school. That’s just not right.”

Coach Jones said, “I believe that if we give our children a chance at a quality public education, they can make their dreams come true. But over the last three years, our state legislature has turned their backs on public education and abandoned our public schools. That is why I decided to run for office.”

Coach Terry Jones has been an educator in Madison County for almost 30 years, with most of that time at Hazel Green High School. Jones has coached several sports over those years. Jones has been named “Coach of the Year” three times for baseball, girls’ basketball and fastpitch softball. He teaches history, and has previously taught P.E. and career exploration.

Coach Jones said that his campaign will focus on three issues: job creation, public education and putting the needs of Madison County ahead of partisan politics.

In his written statement, Coach Jones said that that there are three parts of job creation. The first is targeted tax incentives to recruit and keep or expand business. The second is investing in our local infrastructure to grow the economy and create jobs in the short-term. Finally Jones favors increasing funding and support for public education and vocational training to improve the work force and grow the economy over the long-term.

Coach Jones is a deacon at Locust Grove Baptist Church and he is a member of the Fellowship of Christian Athletes.

House District 21 runs from Huntsville to the Tennessee state line. Rep. Jim Patterson was elected in 2010 when a Republican wave gave the Alabama Republican Party its first majority in both houses in over 120 years.